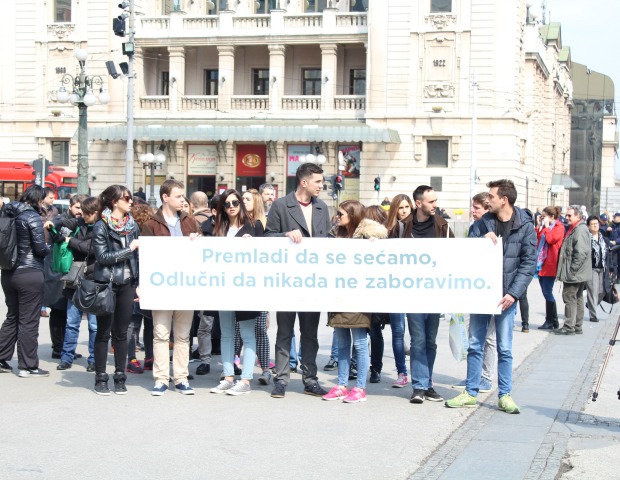 On the 17th anniversary of the killings of 48 Kosovo Albanians in Suhareka/Suva Reka, campaigners walked from downtown Belgrade to the suburb of Batajnica, where the bodies were found in 2001.

Around 30 activists led by Belgrade-based Youth Initiative for Human Rights, YIHR, and the My Initiative movement, gathered in downtown Belgrade on Saturday and walked to the site of a mass grave in Batajnica to mark the anniversary of the massacre by Serbian forces during the Kosovo war.

The aim was to show that the mass grave at a police training centre in Batajnica that contained the bodies of around 700 Kosovo Albanians, including the Suhareka/Suva Reka victims, was only “a walking distance from the Belgrade’s Republic Square”, Jovana Prusina of YIHR told BIRN.

Forty-eight residents of the Kosovo town of Suhareka/Suva Reka were killed on March 26, 1999 by Serbian forces.

Forty-six of them were members of the Berisha family; 14 of them under 15 years old, including two babies, as well as a pregnant woman and an elderly woman.

Two women and a child survived the massacre.

Some of the men were shot dead while the survivors were forced into a pizzaria, locked in, and had hand-grenades thrown at them.

Those showing signs of life were shot in the head and transported to a mass grave in Kosovo, where they were initially dumped.

The bodies were later reburied in at the police training centre in Batajnica after being transported from Kosovo in an attempt by Serb forces to cover up the killings.

Prusina said that another reason for the commemoration walk on Saturday was “the rehabilitation of war criminals which is now happening in Serbia”.

“War criminals are now being declared heroes. There is the case of [former Yugoslav Army official Vladimir] Lazarevic, who is a convicted war criminal and who received a hero’s welcome after he served his [Kosovo war crimes] sentence,” she said.

The Hague Tribunal has also convicted six senior Belgrade officials over the killings in Suhareka/Suva Reka.

A total of 744 Kosovo Albanian victims’ bodies have been exhumed from mass graves in Batajnica.

Mass graves containing the bodies of Kosovo Albanians killed during the war have been found in three other locations in Serbia – at Lake Perucac, at a police centre in Petrovo Selo and at the Rudnica quarry near the town of Raska.

However, so far no one has been prosecuted in Serbia for the operation to remove the bodies.

Only former Serbian assistant interior minister Vlastimir Djordjevic has been convicted by the Hague Tribunal of transporting the bodies from Kosovo to Serbia, among other crimes during the late 1990s war.