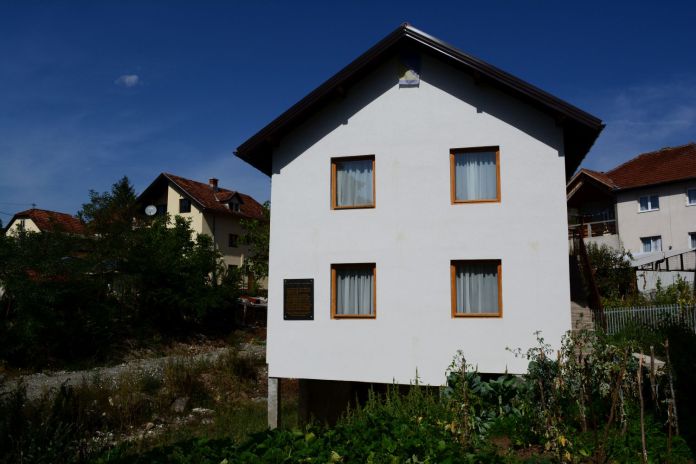 Silence and Denial in Višegrad

The Bosnian war ended 20 years ago, but the eastern town of Višegrad still struggles over its collective history. Local authorities wanted to demolish a house on Pionirska Street, where 70 Muslim civilians were burned alive. Protests put the decision on hold, but a permanent solution has yet to be found.

Text and photo By Marta Vidal

On 14 June 1992, 70 Muslim civilians were taken by a group of armed Serbs to a house on Pionirska Street in the eastern Bosnian town of Višegrad. They were locked in the basement, where the carpet beneath their feet was set ablaze. At least 59 people were burned to death.

A few days after the first fire, on 27 June 1992, in a house in Bikavac, Višegrad, arsonists lit another fire, which killed 60 civilians – again, all Bosnian Muslims. The house in Bikavac was destroyed, but on Pionirska Street the house of death, now a memorial to the victims, remains. It is one of the few memorials that exist for the Muslim civilians murdered by Serb forces in Višegrad.

“In the all too long, sad and wretched history of man’s inhumanity to man, the Pionirska Street and Bikavac fires must rank high,” said presiding judge Patrick Robinson when delivering the first instance verdict for Milan Lukić and his cousin Sredoje Lukić, who were convicted of various crimes against humanity by the International Criminal Tribunal for the former Yugoslavia (ICTY). “There is a unique cruelty in expunging all traces of the individual victims, which must heighten the gravity ascribed to these crimes,” the judge stated. Milan Lukić was found guilty of persecutions, murder, extermination, cruel treatment and inhumane acts and was sentenced to life in prison. He was also found responsible for the murder of 59 Muslim women, children and elderly people in the house on Pionirska Street.

Of Lukić, “Some people here think he is a hero, others think he is bad,” says a young Serb boy who lives close to Pionirska Street. His family moved to Višegrad at the beginning of the war, and his mother witnessed the fire from her house. “Lukić did it,” the boy says, while walking with us to the house.

Recently restored and painted white, the memorial house shows a commemorative plaque honoring all those who died there. At the entrance to the basement were dried flowers that had been left to honor the victims.

Local authorities want to demolish Pionirska House to construct a road, which would erase this memorial to the ethnic cleansing campaign that took place in Višegrad during the war. The house was scheduled for destruction in December 2013. Protests put the decision on hold.

“The proposed expropriation and demolition of the house is brutally indicative of genocide denial in Višegrad,” says David Pettigrew, Professor of Philosophy and Holocaust and Genocide Studies at Southern Connecticut State University. “The local authorities are looking for an excuse to demolish the house in order erase the memory of the atrocities that were committed.”

Professor Pettigrew first visited Višegrad in July 2010, when he was invited to accompany the Missing Persons Institute (MPI) and the International Commission on Missing Persons (ICMP) during their exhumations along the banks Drina River. In 2010, work on the Bajina Basta hydroelectric dam had caused the river level to drop, so experts from the MPI and ICMP thought it was highly likely they would find the remains of victims who had been murdered on the Mehmed Paša Sokolović Bridge in Višegrad and thrown into the river. “Upon reaching the riverbank, we immediately found human bones,” the professor recalls.

In March 2014, Professor Pettigrew visited the memorial house on Pionirska Street with activist Bakira Hasečić, who had participated in rebuilding the house to prevent its destruction in 2013. Police intimidated the activist and Mrs. Hasečić received a court order with a fine for her part in rebuilding the house. She believes the local authorities are using the house as a “political strategy”, and says, “It is a humiliation the victims are going through again.”

While Pionirska House is in danger of being demolished, there exists a statue dedicated to Serb soldiers in the city center. “The statue in the middle of Višegrad that honors the perpetrators is just another example of genocide denial and psychological intimidation designed to re-write history and discourage refugees from returning to their former homes,” says Professor Pettigrew. He recently wrote to Samantha Power, the American Ambassador to the United Nations, to express concern about the Višegrad municipality’s plan to destroy Pionirska House.

Of Višegrad Bakira Hasečić says, “It’s my hometown, but I feel it has been abandoned by the country.” During the war she witnessed terrible atrocities and was a victim of sexual violence. Some of her family members were killed during the ethnic cleansing campaign. According to the ICTY, Višegrad was subjected to “one of the most comprehensive and ruthless campaigns of ethnic cleansing”.

After the war, Hasečić became a prominent human rights activist and founder of the Association of Women Victims of War in Sarajevo. The aim of the association is to give support to war-time victims of sexual harassment and rape. “In this association anyone can be a member, we don’t care about ethnicity,” says Hasečić. “It is multi-ethnic and multinational… War criminals have no ethnicity, they are just criminals.”

Bakira Hasečić now lives in Sarajevo, but often visits Višegrad since she has a house near the town. “I’m not afraid to go there anymore. There are no guns,” she explains. However, Hasečić admits that she still feels psychologically intimidated during her visits. “There are many things that bother me there. There are memorials to perpetrators. We see war criminals in the streets.” According to Hasečić, the fact that many perpetrators have not faced criminal charges and walk freely in the town is in and of itself a form of intimidation as well as a violation of the right to return that was defined by the Dayton Agreement. As a result, “There was a project for the return of refugees, but it didn’t work.” Although more returned to the surrounding villages, only a few Muslims returned to Višegrad.

Višegrad’s Tourism Office refused to answer questions about the memorials in the town. According to Professor Pettigrew, the silence about the war is part of a “culture of denial” prevalent throughout the Republika Srpska.

“We don’t talk about the war,” says a waiter working in the spa of Hotel Vilina Vlas, located five kilometers outside Višegrad. The hotel served as one of the main detention camps where rape and torture occurred during the war. According to the waiter, “The war is in the past, we don’t talk about it. The past is past, we look toward the future.”

However, there seems to be little future for Muslims in Višegrad. The town is now almost entirely populated by Bosnian Serbs. The cemetery seems to be the only land left to Bosnian Muslims, or Bosniaks as they are often called. Most mosques were destroyed during the war, and the two that remain are empty. The Muslim cemetery was closed when we tried to visit it, but from the green gate we could see the dates inscribed on the white tombstones: 1992, 1992, 1992. Between May and July 1992 at least 2,000 Bosniaks were massacred in Višegrad.

“I feel the town is not mine anymore,” says Hasečić. She wants to build a gate around Pionirska House and organize an exhibition of photographs of the victims on the first floor of the house, but she faces objections and threats from those now living in her hometown. This does not keep her from fighting for justice. “I will continue this fight as long as I live,” states Hasečić.