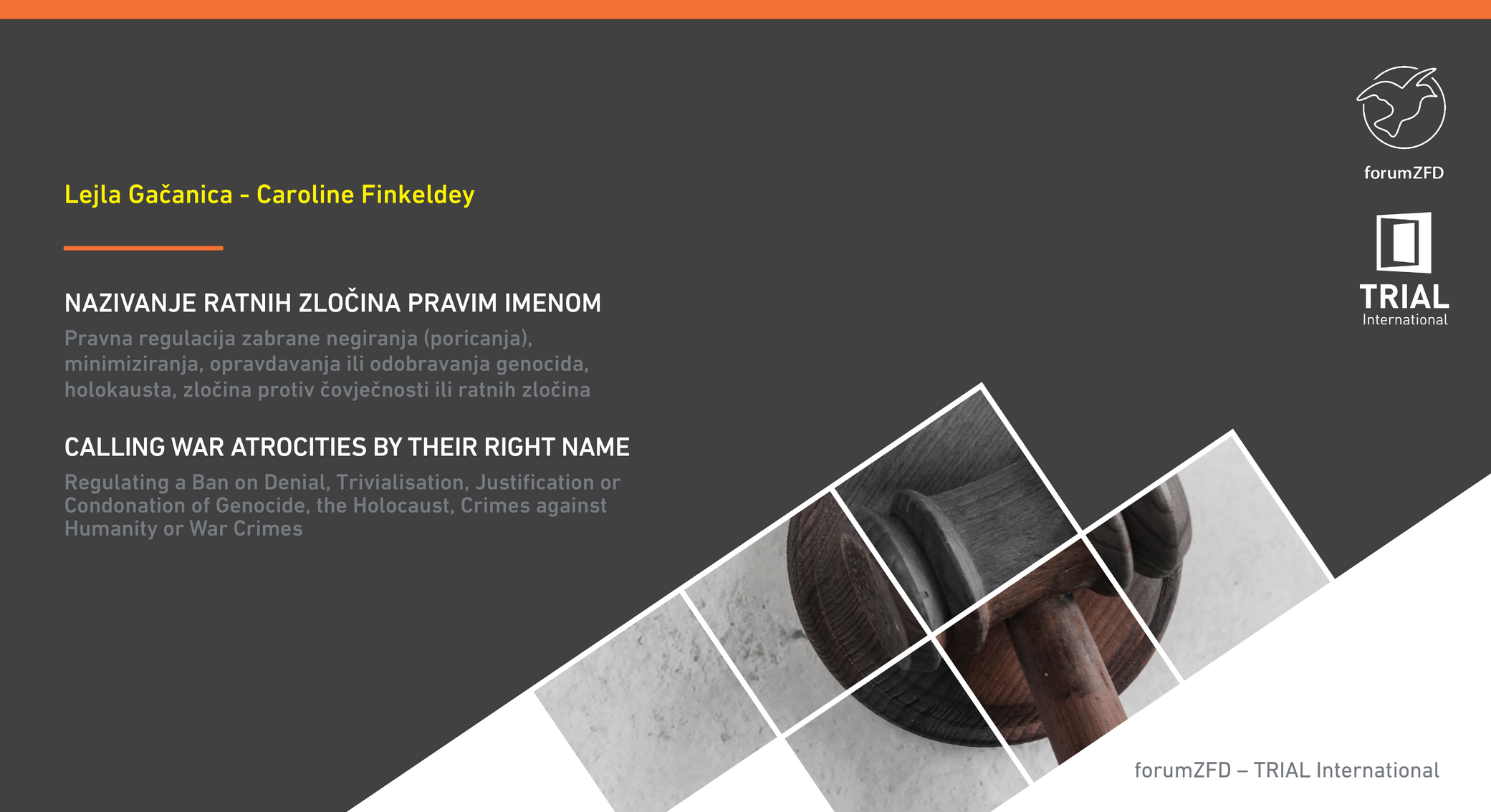 On July 23, 2021, the Office of the High Representative in Bosnia and Herzegovina published a Decision on Enacting the Law on Amendment to the Criminal Code of Bosnia and Herzegovina. More specifically, the amendments refer to Article 145a introducing a prohibition of public approval, denial, gross trivialisation, attempt to justify and glorification of crimes of genocide, crimes against humanity or war crimes. The decision was adopted after numerous failed attempts to adopt legal provisions or a law on this subject matter through a regular procedure at state-level institutions (so far, there have been four proposals, two draft laws on prohibition and two draft documents containing amendments to the Criminal Code of Bosnia and Herzegovina). The decision was also adopted after numerous invitations, warnings and initiatives of the international community, the High Representative, civil society, and associations of victims aiming to point out the unacceptability of the practice of denial of committed war crimes and glorification of war criminals. The new provisions of the Criminal Code are ethnically neutral and are equally applicable to all cases of disputing all final court judgments regarding adjudicated crimes and glorification of convicted criminals.

Since the entry into force of these amendments to the Criminal Code of Bosnia and Herzegovina (July 28, 2021) on the territory of the whole country, it is no longer permitted to deny, justify or trivialise any war crime adjudicated by adopting a final court judgment, if this might incite violence or hatred against any ethnic or national group or an individual belonging to such groups. That means that it is not permitted to justify or deny facts established by courts related to war crimes committed against Bosniaks, Croats, Serbs or members of any other ethnic group, irrespective of who committed them. It is a criminal offence to display such behavior against a group of persons or a member of a group of persons based on race, skin colour, religion, origin or nationality or ethnicity, in a manner that might incite violence or hatred. That includes, among other things:

Denying that genocide was committed in Srebrenica,

Claiming that no war crime was committed against civilians in Uzdol,

Trivialising or glorifying the joint criminal enterprise established for the purpose of persecution and killings in the so-called Croatian community of Herceg-Bosna,

Denying that crimes against humanity were committed in Prijedor, including murders,

Denying that war crimes were committed in Zovik, including unlawful imprisonment,

It is essential to understand that the importance of amendments to the Criminal Code lies in the fact that, although the war crimes committed in Bosnia and Herzegovina did have an ethnic and religious component, although the ideologies that caused the war and continued to be promoted by the political elites are also based on ethnic, national and religious one-sidedness and exclusivity, and although there are ethno-centric interpretations of the past engrained in the glorification of criminals and denial of accountability of members of one's own group, the relationship towards the past must be based on facts. The public space, including the political and media discourse,  and the educational system in Bosnia and Herzegovina was characterised by denial of court-established facts and imposition of distorted ethnic, heroic and victimological narratives, which are far from facts and law. Such a state of deliberate maintenance of a 'frozen conflict', in which crimes are further justified and denied, considerably hindered a recovery of the post-conflict state, reconciliation and it also prolonged the effect of war on victims in a horrific manner, while their suffering was disputed. The unacceptability of such a situation has led to amendments that criminalise any public condone, denial, gross trivialisation or attempt to justify any war crime, crime against humanity and (without in any way being limited to) the crime of genocide.

It should be stressed that the amendments to the Criminal Code of Bosnia and Herzegovina include the act of denying, publicly condoning, grossly trivialising or attempting to justify the broadly defined crimes – the crime of genocide, war crime and crime against humanity. As stressed in previous analyses of forumZFD and TRIAL International, such prohibitions must refer to adjudicated crimes, and these provisions ensure precisely this. It is prohibited to deny or justify crimes established in final court judgments of the International Criminal Tribunal for the former Yugoslavia (ICTY) or the International Criminal Court (ICC) or the Court of Bosnia and Herzegovina. In compliance with the model from the EU Council Framework Decision 2008/913/JHA on combating certain forms and ex

Has Bosnia and Herzegovina been given a new chance for a catharsis?

In his Decision and Amendments to the Criminal Code, the High Representative has recognised and criminalised another extremely harmful practice: glorification of persons convicted of genocide, crimes against humanity or war crimes in a final court judgment. In Bosnia and Herzegovina, the glorification of war criminals has taken on the proportions of national/ethnic heroism, has become part of educational systems and public space. Over the past years, streets were named after convicted perpetrators of various war crimes, of different ethnicity, monuments were dedicated to them, they were awarded medals and funds were ensured for associations and events that bore their names. Each of these practices as such is now criminalised, i.e. any glorification of convicted war criminals is now subject to criminal liability, without the additional requirement that it might incite violence or hatred.

The accountability for the committed crimes is individual, just as the accountability for their disputing or approval, and in this respect, any attempt to present these legal provisions as being anti-national, anti-ethnic, or targeting a whole ethnic group as such is wrong and constitutes pure political manipulation. Contrary to numerous media reports and politicised statements, the legal provisions will not punish Serbs, but rather those individuals who dispute, trivialise or justify crimes adjudicated in final judgments. Legal provisions will also not 'protect' Bosniaks, but all those persons who are victims of such crimes. Such legal regulations and their implementation in practice will ensure further improvement of the rule of law, compliance with the legal system and enable a dialogue. This is a period in Bosnia and Herzegovina, when it must be understood that the accountability and guilt are not collective, and that this decision constitutes an important step ahead in creating the pre-conditions for the much needed catharsis.

This analysis aims to re-shift the focus of the new provisions of the Criminal Code on those they relate to. These legal provisions were not adopted against someone – these are legal provisions for all citizens of Bosnia and Herzegovina. Contesting, justifying and glorifying war-related crimes or criminals has an absolutely negative impact on peacebuilding in this country. However, it actually means that the acts of contesting, justifying and glorifying all killings, imprisonments, rapes, destruction, and persecutions did not affect ethnic groups as abstract and distant communities, but rather real persons, their families and their descendants. That is the true effect on every local community that reawakens memories of the war, fear, divisions and trauma. These provisions insist on using facts that specify the scope and type of crimes as the basic step for facing the past. On accepting that crimes were committed, on accepting individual accountability that has been established, on liberating nations and ethnic groups of accountability and on admitting the suffering of victims and survivors that belong to all ethnic groups. So far, this had not been the case. The amendments to the Criminal Code aim to remove the interpretative burden of the past from the public space in Bosnia and Herzegovina and give a new chance to all individuals and groups to overcome a complex past.

The purpose of amendments to the Criminal Code does not have to necessarily be achieved by initiating and conducting criminal proceedings. If the legal provisions prevent the commission of crimes of public glorification, approval, denial, gross trivialisation or attempt to justify the crimes of genocide, crimes against humanity or war crimes, they should be considered a success. If however, one of these crimes is committed nevertheless, the competent institutions now have a legal grounds and responsibility to prosecute and establish the case law. Let us also add a future perspective to the amendments to the Criminal Code of Bosnia and Herzegovina: every established crime and every person convicted by adopting a final judgment (having in mind that war crime proceedings are still ongoing) will not be glorified or contested in the future. This is a new and important step in the post-conflict life of Bosnia and Herzegovina. Although the implementation may be a challenge, these legal amendments should truly be used to achieve progress. It is therefore important to shift the perspective and focus on what they can and should ensure, instead of engaging in unproductive and unfounded political obstructions. It is necessary to remind that the practice of denying and glorifying war crimes and criminals has never been a good or acceptable path for Bosnia and Herzegovina and all its inhabitants, irrespective of whether there had been legal provisions in place prohibiting such a practice or not.

The analysis is the result of cooperation between a legal expert, Lejla Gačanica, and the organisations forumZFD and TRIAL International