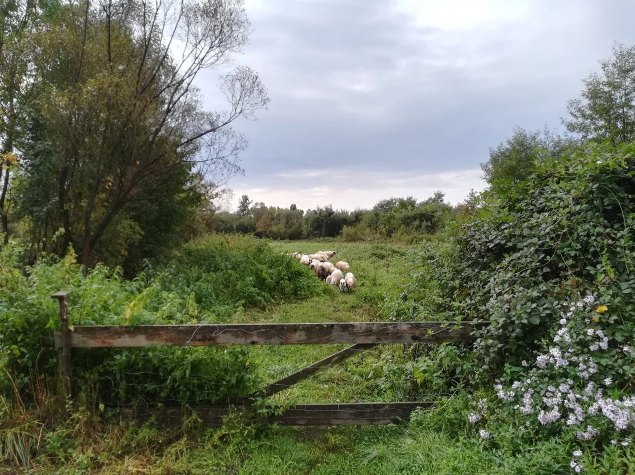 It’s a sunny day at the end of summer 2020. When entering Kevljani, the village in the northwest of Bosnia-Herzegovina, the first thought that comes to my mind is one of a calm and pleasant place dotted with nice houses, set in a beautiful landscape surrounded by green fields and mountains. But stepping further into the village you can find some delicate signs which do not fit into the image of perfect countryside: on the right there are the ruins of some houses, on the left the foundations of a few former houses, the mosque with a destroyed minaret, cemetery and monuments.

Kevljani hides one of the terrible secrets of the war which took place in Bosnia-Herzegovina between 1992-95. In 1992 the village, inhabited mainly by Bosniaks, was attacked by the Bosnian Serb Army. In the massacre many people died or were taken to concentration camps like Omarska or Trnopolje. The village was totally destroyed, and most houses were reduced to the foundations, aiming to leave nothing for families to come back to.

When the war ended, some survivors decided to return. Despite the fact that it is a place which is related to traumatic times in their lives, it is also their homeland, where they grew up. They rebuilt their houses with other returnees, without any support from any institution. What they found on their return were the ashes and the mass graves where their relatives were buried. The village, which once had the population of nearly 2000 people, today has just a fraction of that that number.

During the programme we also had the chance to watch a film about what happened there: “Pretty Village”. This is the story of Kemal Pervanić (founder of Most Mira, the survivor of the Omarska camp) and his neighbours, relatives and friends. It is poignant that they literally survived “hell on earth”. The suffering caused by losing family members, time spent in the camps while being tortured and dehumanized, and then looking for another place to live, is unimaginable.

I am very grateful for the opportunity to participate in this Most Mira programme. I cannot express my feelings in a simple way, one thought follows after another, one question follows after another. If I, just a participant of this week-long-programme, cannot handle it, how can the people who experienced the war do it with such calm? This is a tragedy for the whole of society - for the victims, but actually for the perpetrators as well (even if they do not realise that). Could the next generations build a peaceful country, without hate and prejudice, and take care of the people and memorial sites where the massacres took place? Organisations like Mira Most definitely support these changes.