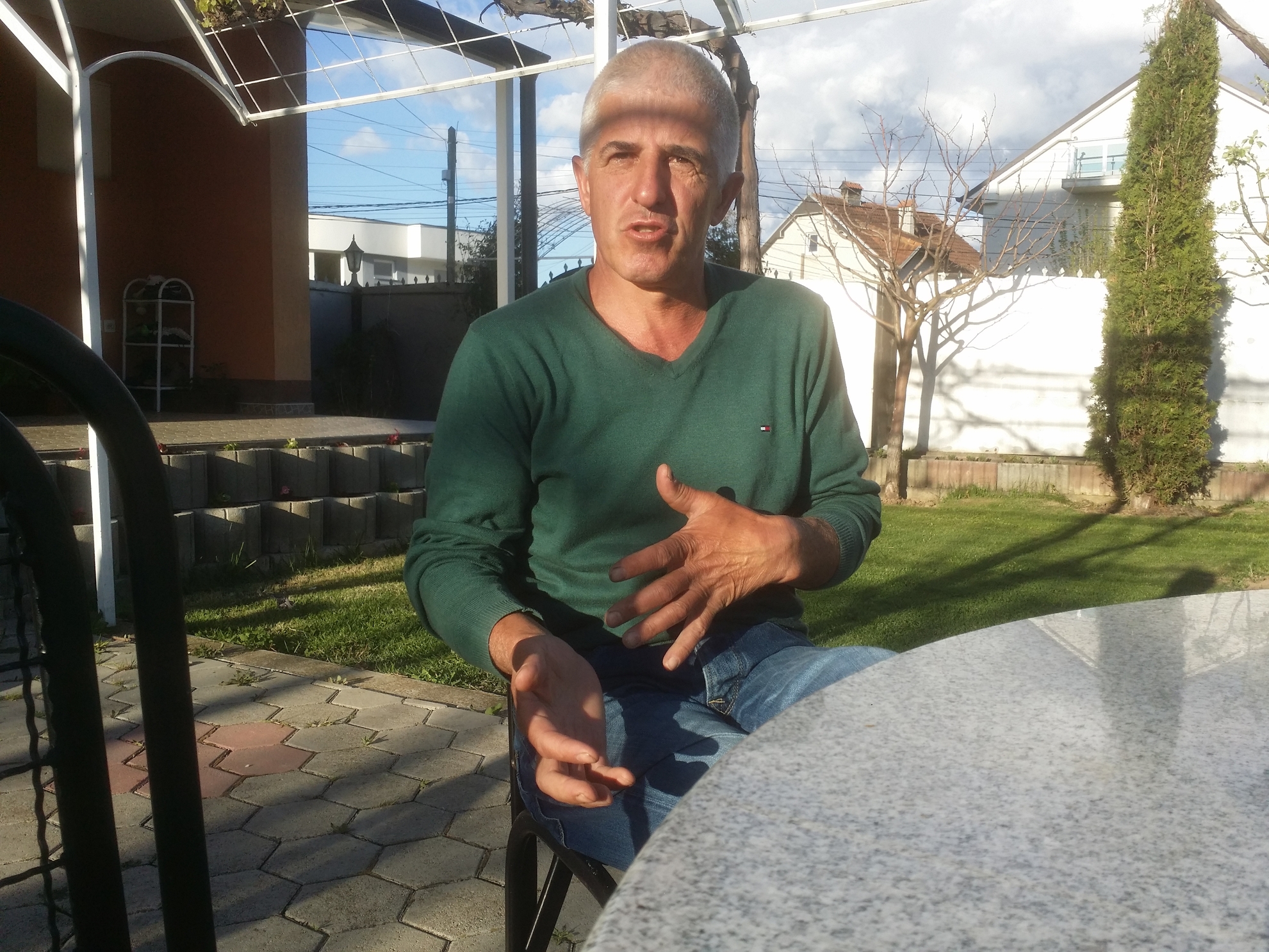 “My Father said: I will not leave the house”

Fadil Nuha, a war veteran, has not yet found the bones of his missing father.

Nobody managed to convince Xhemajl Hasan Nuha to leave hearth and home, despite that Serbian forces were going to and fro his house to loot valuables. Nuha knew he was in the lists of the Serbian secret service. He was part of émigré organizations supporting the illegal movement in Kosovo. He had been arrested several times during the ‘80s, and his passport had been confiscated for several months. In 1998, once the war in Kosovo erupted, he returned to be close to his family. His son Fadil was part of the Kosovo Liberation Army, active in the Operative Zone of Nerodime in Jezerc of Ferizaj. A few days before the Serbian forces took him away from his home in Manastirc, Xhemajl Nuha had visited his son at the village where the head quarters of the zone were positioned.

“He came to Jezerc two or three days before being taken away. He brought us food to Jezerc because I was a soldier and my wife, daughter and sister were there. He brought some food, sugar and some other things, and I told him: ‘Stay up here!’. I asked the commander to find a place for him”, recalls Fadil Nuha. “And I told him: ‘Stay, Father!’ He said: ‘No, I will not leave our home’”, says Nuha, casting his eyes towards the three-storey house, built in the beginning of the ‘80s, when his father did not dare for three years to return as he feared he would be arrested under charges of being a member of the Kosovo People’s Movement in Germany. “That was the last day I saw him while I was in Jezerc at the Head Quarters because I had military tasks. I also went in the evening a little, I was told for one and half hour”.

“Mother saw him the day he was taken”

Xhemajl Nuha, 64 years old, is one of the five victims of the village Manastirc. Four other fellow villagers had been killed on 30 April, two days before Nuha was taken from his home. Unlike the previous years when the commemorative ceremony was held jointly for them on 30 April, this year, his family members are receiving condolences from their relatives via phone calls. Fadil Nuha says he received many a phone call on Tuesday. His two brothers, two sisters and his mother, who live in Germany, expressed their condolences. Shaha Nuha did not part from her husband until the Serbian forces shot their bullets around the garden gates, while keeping her husband in front of the gun barrels.

“Mother saw him that night when they took Father away” says Fadil Nuha. He turns to the left pointing at the place where the old garden gates used to be, the ones that were perforated by the bullets that the paramilitaries shot in her direction as she refused their order to “go to the woods”.

“Mother went to Shumoj Neighbourhood, where the people were gathered. When she returned the next day, she saw that Father was not there,” he adds.

“Where did you take my husband?”

Right away, Shaha Nuha left towards the houses of her neighbours that were full of members of the regular and paramilitary Serbian forces. “She had asked them: ‘Where did you take my husband?’”.

The Serbs would respond by not saying any word. “They had only waved the Kalashnikov to indicate that they had killed him,” recounts Fadil the testimony of Mother Shaha, who would return home only to release the two cows from the barn. “Mother is strong and she holds well,” says Fadil Nuha, telling that he spoke to her the night before.

Xhemajl Nuha is only one of the 1,641 missing persons. 27 April marks the Day of the Missing Persons in Kosovo. Fadil Nuha says that every year, members of the families of the missing persons honour all victims of the most brutal massacres across Kosovo. “In April, we go to all commemoration ceremonies of these massacres,” he emphasizes.

The caretaking Prime Minister Albin Kurti has considered 27 April 1999 as “horrendous” – the day when 376 civilians were massacred in Meje in Gjakova. “Currently, there are still 1,641 missing persons. There are the families of 1,641 persons who continue to live with the anxiety of waiting, 1,641 families whose suffering has been prolonged for over two decades. Children, now adults, grew along with the waiting for an answer. Elderly people who have no knowledge of the fate and location of their heirs” wrote Kurti on “Facebook”.

Former fighter Fadil Nuha says while standing in front of the door to his home, where his father was taken away on 28 April 1999, that politicians are aggravating further the sadness and weariness that families of the missing have by not finding the bones. “Politics is making things harder, because as people, there is nothing we can do,” he says.

There is still no official response by any local or international institution on the fate of his father. The four fellow villagers killed two days after him, were found in the village. Nonetheless, Fadil Nuha believes that his father’s body may have been dumped anywhere. “It is hard to find him as unlike cases with tens of victims, finding one is harder, as they may have dumped him in the trash and someone might have cleared those away after the war, when the village was cleaned.”

Right after the war, the war veteran himself had extracted together with some fellow villagers a lifeless body. He says the Serbian forces had thrown a dog and inert matter on the corpse of a fellow villager. Xhemajl Nuha and the other victims from the village are honoured on the anniversary dates at the village school too. Young Xhemajl steps on the stage there also. “When he was born, I named him after my father,” says Fadil Nuha, adding that he addresses his son as Mal. “Yes, Mal, because everyone called my father Master Mal”.

Epilogue: Still to this day, former fighter Fadil Nuha has received no answer by any local or international institution as to the fate of his father. The four fellow villagers killed two days after him, were found in the village. Fadil Nuha believes that his father’s body could have been dumped somehwhere.

Rexhep Maloku (1984) is a journalist and translator for the newspaper “Koha Ditore” since 2007.  At the same time, he produces TV stories for "Kohavision" and translates from English for various literary magazines. Maloku has graduated from the Faculty of Journalism at the University of Prishtina, “Hasan Prishtina”, and is completing English studies at the University College AAB.

This article was originally published in the Albanian language on Koha.net, as part of a media partnership between forumZFD Kosovo and Koha Ditore newspaper in Kosovo, in a commitment to focus on topics relating to Dealing with the Past in the region.