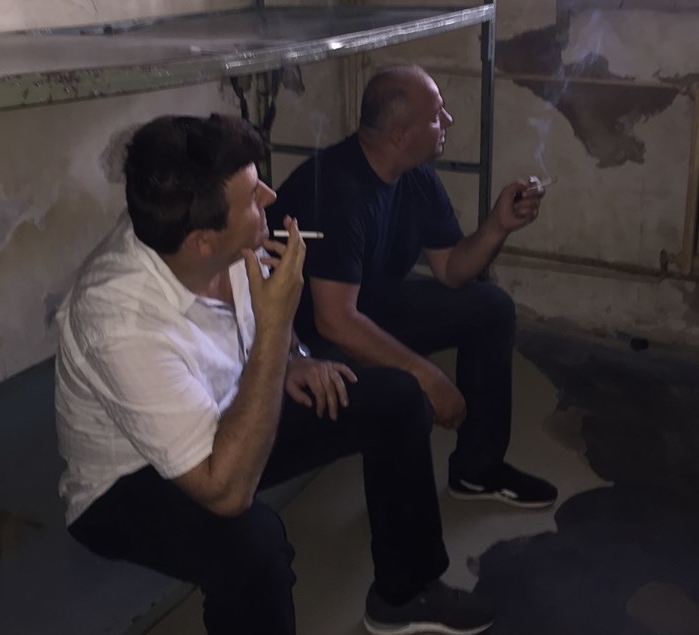 “He counted 145 murdered people in the yard”

Besim Zymberi and Skender Ferizi, former political prisoners, sentenced to 11 and 14 years of imprisonment respectively, saw with their own eyes more than 150 Albanians who had been massacred in the yard and pavilions of the Dubrava Prison in May 1999. Although two decades have followed this crime committed by the Serbian state, no institution of Kosovo has summoned them to testify about the horror of those days.

For months on end they would survive the most inhuman forms of torture. Electroshock, whip lashing, boiling water, sleep deprivation, body spiking with nails and other assorted items. The scars of such brutal mistreatment are still on their bodies, even after more than twenty years.

“I could not find a single word in the language that would describe the torture inflicted upon us,” says Besim Zymberi, former political prisoner. “A human’s body is stronger than what can be imagined though,” adds Zymberi, laughing, while testifying together with Skender Ferizi, another former political prisoner. Zymberi gives an account of the torture inflicted upon both of them and their friends at the Serb prisons. Ferizi adds to the account from time to time, with brief sentences. Zymberi, who in September 1998 was sentenced to 11 years of imprisonment as one of the members of the Ferizaj Group of 28 individuals. Eleven activists had been arrested on 28 June 1998 under the suspicion of “terrorism”. Both had rejected the charges. Ferizi, who had been sentenced to fourteen years, was also member of the Council for the Protection of Human Rights and Freedoms (CPHRF), who for many years had used photography and camera to document the crimes perpetrated against innocent Albanians. He undoes the shirt button to show the scar of a screw that the inspectors of the infamous UDB (secret service) of Serbia had inserted on his chest. He bears similar marks near the left wrist and on the left leg. The Ferizaj Group was sentenced to 268 years of imprisonment. The worst tortures against them were carried out in the prison of Gjilan. Ferizi shows pictures taken during the visit they paid to the prison cell now turned a museum in this city of Anamorava (eastern Kosovo). In spring 1999, both friends had seen with their own eyes more than 150 Albanians murdered and butchered in Dubrava Prison by the regime of Slobodan Milošević, whom the international media referred to as the “Butcher of the Balkans” for orchestrating the wars in former Yugoslavia.

The gathering from the prisons in Kosovo and Serbia

On 19 May 1999, in cell 2/31 of Dubrava Prison, Abdullah Tahiri from Malisheva village in Gjilan had his hands placed on Feriz’s knees while was talking to him when the concrete slab of the ceiling fell upon them. Tahiri did not survive the serious injuries. The concrete slab killed on the spot two other cellmates: Enver Topalli and Gjok Ndreca. The first NATO bomb had fallen on the space between the cell of Ferizi and Zymberi and the Prison Directorate of Dubrava. All Albanian political prisoners who had been brought there from the other prisons around Kosovo and Serbia in the period between 29 April until 1 May had expected the Dubrava Prison to be the target of the North-Atlantic Treaty Organization.

“Some 900—1,100 prisoners, including thirty Serbs, were kept there from the moment NATO bombing commenced. Other prisoners too were transferred to Dubrava (including 150 people from Gjakova), some of whom came from the prisons in Serbia,” reads the report of several hundred pages “Under the Power of Orders” by “Human Rights Watch”. “NATO bombed the prison on 19 and 21 May, killing at least nineteen Albanians.” The same report writes that for months on end, the Dubrava Prison had been used as a centre for coordinating and undertaking actions against the surrounding Albanian villages right before the bombing of the world’s most powerful alliance started in the name of humanitarian right.

“We did not utter this to one another but we all thought about it. They had gathered us all in Dubrava, as the premises had been used for months on end by the JSO – the UDB squadron that had arrived from Belgrade,” emphasizes Zymberi. “It was complete with antennas, radars; in other words, it was a military target. So, they gathered us in Dubrava Prison knowing that NATO would bomb there.”

Ferizi and Zymberi say that before the bombing, the Serb prisoners, convicted for other crimes, had been relocated to a wing of the prison that was not a target of attacks. “Most interestingly, five minutes before NATO bombing started, the guards left the building. This means, they had accurate information before the attack,” says Zymberi. “It is also interesting that only the deputy director, Nexhmedin Kaliqani, a Muslim, was present in the director’s office right across from our cell, where the bomb fell. The other staff was not present.”

The survived Albanian prisoners would face other NATO attacks for two days in a row. The Serb personnel would look on from the sides. Ferizi and Zymberi saw with their own eyes how a shard of a NATO bomb cut off the head of an Albanian prisoner who was immobile. “He was on a cart. I went there and took his head, I pulled his jumper up and placed the head underneath so that it would be with the body when he would be found,” he says. “Another shard passed between my head and Skender’s. The distance between us was not more than five or ten centimetres, as we were trying to seek shelter under my leather jacket, which we were holding above our heads to defend ourselves from the soil that exploding bombs moved,” says Zymberi. Both recount how throughout the entire time the Serb prison personnel and prisoners turned murderers had prepared the plan to butcher the hundreds of Albanians gathered in Dubrava.

“The Serb prisoners had been turned into soldiers. They killed together,” points out Ferizi. “On 22 and 23 May the Serbs carried out three attacks. One on the morning and another on the afternoon of 22 May and one on the morning of 23 May”, says Zymberi.

“On 22 May, the Serb security forces lined up in the yard nearly one thousand prisoners and shot at them with snipers, machine guns and grenades from the prison walls and guard towers, killing 70,” writes the HRW report “Under the Power of Orders”, which also contains testimonies from those who survived this massacre. “At least another dozen prisoners were killed in the next 24 hours, whereas the prison guards, the special police officers and maybe 151 paramilitaries attacked the prisoners who were hiding inside the undamaged buildings, basements and sewers of the prison.”

“The prisoners hid in large wells,” confirms Zymberi. “Ten people went into the round manholes. Serbs were throwing grenades and killed everyone. While there were ten people inside the manhole, only the first one would be killed by the grenade, the rest were spared,” highlights Zymberi, saying that at that time, there were 953 Albanian political prisoners in Dubrava Prison. “The lists bear the names of 121 murdered people. There are tens of others not in the lists,” emphasizes Ferizi. “When they made one prisoner to count them, he counted 145 murdered people only at the yard,” reiterates Zymberi. “Some others were at the door. Allegedly murdered while trying to flee”, adds Ferizi, saying that on 23 May all prisoners were ordered to line up in four rows nearby one of the observation towers, as prison officials claimed they would be taken to the Nish Prison. “that is where they started to fire off the machine guns and other weapons. More than one hundred prisoners were murdered there,” points out Ferizi, who had hidden in the kitchen. Meanwhile, some prisoners, amongst them a wounded Ferizi and Zymberi, improvised a trap made of metal med parts in cases the paramilitaries or the guards would go near them. “On 23 May they took us to the sport hall. We said our farewells there because we thought they were going to kill us but in the meantime they received an order. We could hear them over the radio as they were speaking. Apparently they decided they had killed enough, as there were some five hundred people, half of the prisoners,” says Ferizi, who along many other prisoners, including the wounded ones, on 24 May were transferred by trucks to the Lipjan Prison.

“On 10 June, two days before NATO entered Kosovo, some 2,000 Albanian prisoners were transferred from Kosovo to the prisons in Serbia,” reads the report “Under the Power of Orders”.

The indifference of Kosovo

Zymberi was taken to the Sremska Mitrovica Prison. Ferizi was taken to the Zabele Prison in Požarec, Serbia. They would be released in 2002. Zymberi says nobody has contacted him so far - either him or any of the other prisoners he is still in touch with – to testify on the Serbian crime in Dubrava. He says a lawsuit was filed in 2003 with the Court of Peja. The Association of Political Prisoners also filed criminal charges. In 2011 EULEX too informed they would initiate investigation albeit with no concrete results to date. The Humanitarian Law Centre founded by the Serb activist Nataša Kandić has conducted more serious efforts to provide the justice system in Serbia with testimonies and documents on the entire chain of responsibility for the massacre in Dubrava. There are tens of names. (The Humanitarian Law Centre had established that the Ferizaj Group had been the one to undergo the most tortures in prison in former Yugoslavia ever since the end of World War II, says Zymberi. Bilall Shala, Cen Dugolli and Rexhep Bislimi died of torture, while Ahmet Hoxha and Enver Topalli in the massacre of the Dubrava Prison).

The massacre of Dubrava was part of the trial process against Milošević, whose regime invited in May 1999 foreign journalists to go the crime scene, while attempting to misrepresent all murdered individuals as victims of NATO bombing. But Jacky Rowland, a BBC journalist, who during her two visits had witnesses the Albanians butchered in Dubrava Prison told him to his face that the horror she had witnessed proved the responsibility of the Serbian state. “It – God forbid – you are hit by a bomb, I think I could tell that by looking at your body whether you died as a consequence of that manner of death” Rowland would say to Milošević, who died without receiving the deserved sentence.

Zymberi believes that the Hague Tribunal was not interested in delivering justice with regards to the massacre of Dubrava as it was clear that an institution under the state control had committed genocide upon the order of the state of Serbia. “Give this case to anyone, given them the qualifications, give them the parameters (Dubrava Prison) was under state control; there were prisoners based on verdicts and the majority were going through the processes, and that someone will establish what happened was genocide,” emphasizes Zymberi with rancour. “We were gathered there from all prisons on purpose. According to all parameters of the International Convention on Genocide, it was a clear cut case of genocide. A genocide by the Serb state.”

(This story is published in collaboration with forumZFD Kosovo, part of the activity “Dealing with the Past”)

Photo caption: Skender Ferizi (left) and Besim Zymberi two years ago in cell no. 15 – where Ferizi was kept – in the Gjilan Prison, now turned into a museum. That is where they were subjected to the most inhumane tortures during the trial process in 1998.