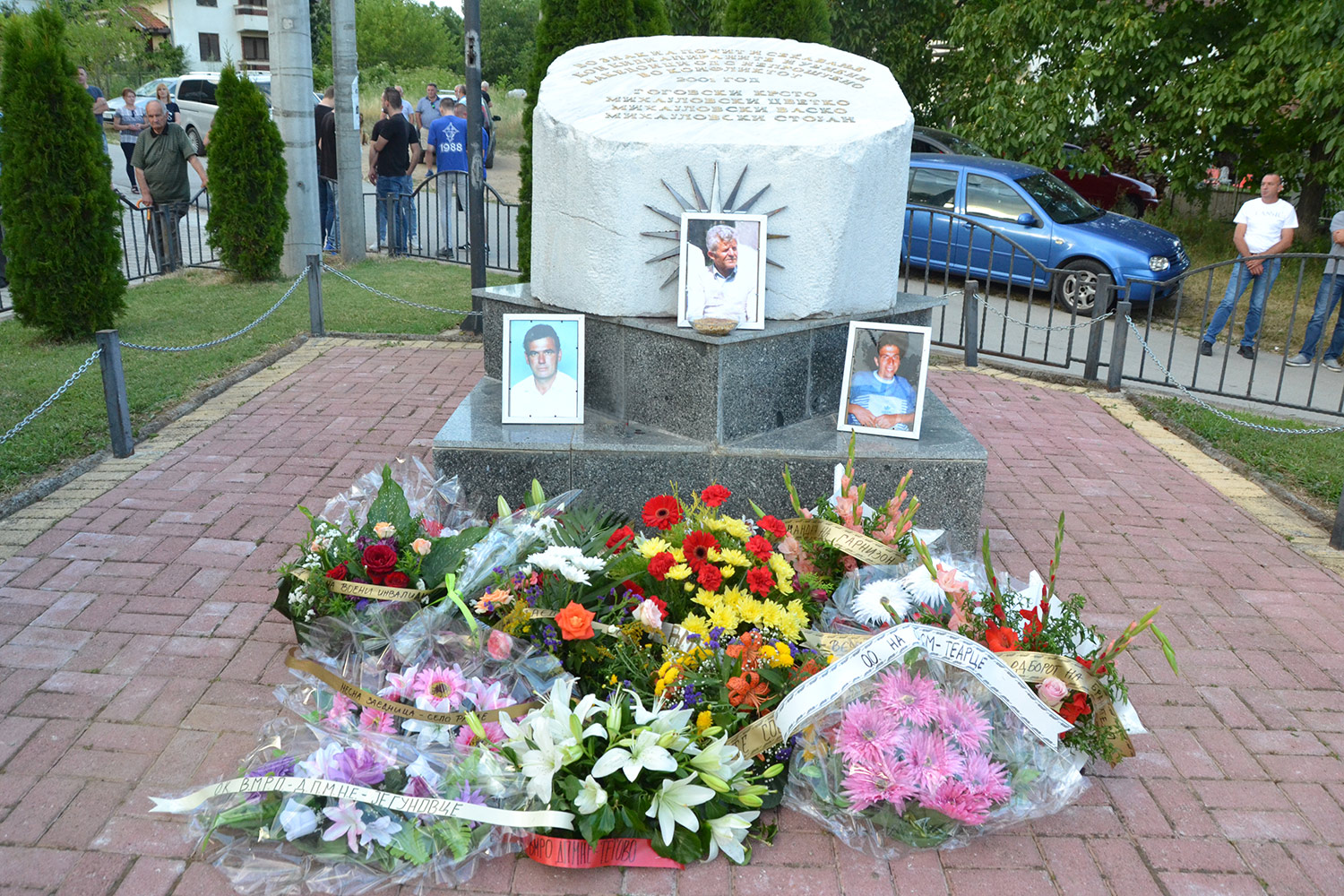 “It’s been 18 years since my father, Krsto, was kidnapped and killed. My soul still hurts when I remember what occurred on 24 July 2001. They say time heals all wounds, and perhaps it does, but for my family and I, the pain is ever-present, especially knowing the criminals responsible still haven’t been found or punished” said Vojo Gogovski, of Neproshteno, a village near Tetovo.

The conflict in Macedonia, between the National Liberation Army (NLA), a paramilitary organization of Albanian rebels, and the Police and Army of the Republic of Macedonia (ARM), began in Tetovo on 14 March 2001.

“On the evening of 23 July, the situation worsened in the area near Neproshteno, and the Macedonian population was evacuated to the neighbouring village of Ratae. My family was among them. The next day, my father, extremely worried about our house and property in Neproshteno, said: “I’m going home. Everything I’ve earned in my life is there. I’ve done nothing wrong to anyone and there is no reason to fear anyone”. Around 5:30pm, he called us on the phone and said he was fine and not to worry. That was his last phone call to us. According to the information we were given later, my father, Krsto Gogovski, was kidnapped from our house by uniformed members of the NLA on the afternoon of 24 July 2001. We still don’t know what really happened to him that day,” Vojo Gogovski continued.

The fates of other Macedonians kidnapped in July and August 2001 were similar. Some were abducted from their homes, or while working in the fields, in Tetovo and surrounding villages. In other cases, no one can confirm what happened. They simply disappeared.

On 13 August 2001, the signing of the Ohrid Framework Agreement ended the conflict. A few months later, in October 2001, Macedonian security forces exhumed a mass grave near the village of Trebosh, which was believed to contain the bodies of missing persons. When forensic teams arrived at the scene, it was clear that excavators had dug up the bodies to remove evidence of the crime. However, the forensic teams managed to exhume the nearly intact body of one person and the partial remains of three persons from that gravesite.

In the laboratory of the Macedonian Academy of Sciences and Arts (MANU), a DNA analysis was performed on the remains to determine the identities of the individuals found in Trebosh. Although the Institute of Forensic Medicine asserted that the findings were 99 percent accurate, the families of the kidnapped did not accept the results. The remains were then sent to Bosnia and Herzegovina, to the Institute in Tuzla, where the DNA analyses were fully confirmed. Despite confirmation, the families refused to receive and bury the remains.

“I saw the remains of my husband Dimitrie, but only 30% of his bones were found. The other parts of the body were missing. So, what should I do? Have a funeral for a few bones of my husband? What if, after we bury him, other body parts are found? Will we have another funeral? How many funerals should we have - one, two, five? This would be a huge trauma for my family and I after all that we have survived,” said Vena Dimovska, the wife of kidnapped and murdered Dimitrie Dimovski, with bitterness in her voice.

The family of Vojo Gogovski refused to collect the remains of Kristo Gogovski until many years later.

“My father’s body was found at the very bottom of the Trebosh mass grave, so when the criminals exhumed the grave, they did not reach his body. For a long time, though, we didn’t want to collect the remains, mostly because of my mother. Until the last moment of her life, she believed her husband was alive and that one day he would return to her. We organized my father’s funeral only last year, after my mother died,” explained Vojo Gogoski.

In 2014, a memorial park was built in Neproshteno, dedicated to victims of the 2001 conflict. 17 years after the remains of Krsto Gogoski and Vasko Mihajlovski were found, they were buried in the village cemetery in Neproshteno. The few bones of Simeon Jakimovski and Dimitrie Dimoski, found 18 years ago in 2001, remain in the refrigerators of the Institute of Forensic Medicine in Skopje.

Excavations were also carried out near Neproshteno a few years after the conflict, but the search did not yield any results. Since then, authorities have conducted no further searches for the bodies of the 8 still missing Macedonians.

The families of the missing have been engaged in a long battle with state institutions to learn the fate of their loved ones. They are still seeking answers from the police, military, politicians, and foreign officials who resided in Macedonia during the conflict, but nobody is providing them with information.

“There is no one in this country with whom we didn’t speak. We argued, we cried, and we pleaded. We spoke with the then President, Boris Trajkovski, and his then assistant, Stevo Pendarovski, who is now the President here; also with the leaders of the Internal Macedonian Revolutionary Organization—Democratic Party for Macedonian National Unity (VMRO-DPMNE), with the Socialist-Democratic Party (SDSM), and with the Albanian party leaders, but we got no answers,” recalled Vena Dimovska, visibly upset.

The families of the missing Macedonians tried to seek justice through the courts. This was a long and difficult process. The first legal blow for the families came in 2002, when the Parliament passed an Amnesty Law, which pardons ethnic Albanian paramilitary fighters (NLA) who fought Macedonian security forces in 2001. The second and most severe blow came in July 2011, exactly 10 years after the abductions and murders. The Macedonian Parliament adopted an authentic interpretation of Article 1 of the Amnesty Law, voting to dismiss four war-crimes cases returned from the Hague and thereby providing amnesty to the NLA leadership and fighters accused of orchestrating and carrying out the kidnapping and killing of 12 ethnic Macedonians (and one Bulgarian) in the Neproshteno region.

“We brought two lawsuits before the courts for the Macedonians who were kidnapped during the 2001 conflict. One was a civil lawsuit against the state, named ‘Neproshteno’, which sought damages for endangerment by terrorism. In 2005, the lawsuit resulted in the courts ordering the state to award families of the abducted persons appropriate amounts of compensation. We also initiated criminal proceedings for the ‘Neproshteno’ case and for the second case, ‘NLA leadership’, which sought to bring the parties responsible for war crimes against civilians to trial. These cases were intended for the Hague but were returned to Macedonia. In line with an authentic interpretation of Article 1 of the Amnesty Law, the Macedonian Parliament voted to dismiss the returned war crimes cases, and all NLA members were thereby pardoned. But, let it be known, that war crimes committed against the civilian population never become obsolete, which means that this case can be re-opened at some point in the future,” said lawyer Vancho Sehtanski, who represented the families in court.

All Macedonians kidnapped during the 2001 conflict were formally declared dead by the Tetovo court in 2005.

Not only Macedonian civilians suffered in the 2001 conflict. Ethnic Albanian communities also suffered causalities and disappearances. Hajredin Halimi from Skopje, Sultan Mehmeti from Struga, and Xhelil Osmani from Gostivar are still missing, while the remains of Ibrahim and Zekirija Veliu from Skopje and Islam Veliu from Struga were found in various locations in 2004. The body of a Bulgarian national, Radoslav Balev, was also found in 2004.

At first, the families of the kidnapped Albanians and kidnapped Macedonians worked together to seek answers from authorities about the fate of their loved ones. But, for reasons still unclear, these families halted their previous cooperation, stopped contacting the authorities, and remain unavailable for comment.

Although 18 years have passed, the wounds of the 2001 conflict have still not healed. The bodies of eight of the kidnapped Macedonians have still not been found, and it remains unclear why the seven Albanians were murdered. Both Macedonians and Albanians continue to mourn their loved ones.

Zoran Andonov is a journalist and correspondent from Tetovo. His 30-year career includes working for the newspapers Vecer and Dnevnik, TV stations Kanal 5 and MTV, and, currently, the web portal ‘Сакам да кажам’ (‘I want to say’), an open source platform. Andonov is also a photographer who has held several solo and group exhibitions.