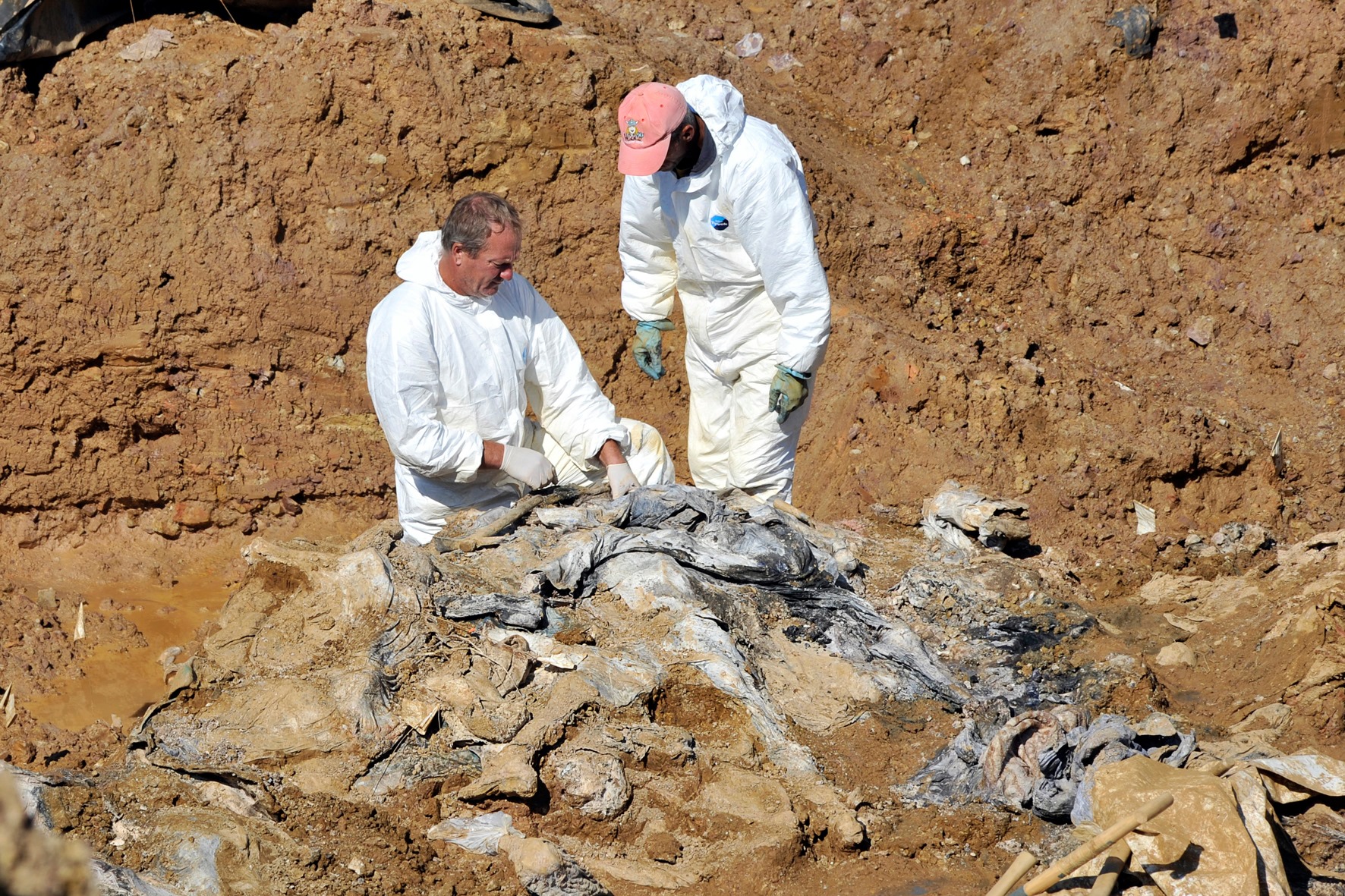 Gravesites far away from the courtrooms

Nothing paints a clearer picture of war than images of a freshly opened grave with human remains emerging from layers of earth and gravel. Mass gravesites are places where we come face to face with death, and they are more horrifying than any living testimony or documentary. They are more gruesome than graveyards, because they offer us an intimate view of the decomposing human body and skeleton. In these parts, mass gravesites are at the core of every nationalistic narrative and every political campaign aimed at placing blame on the enemy.

It's somewhat of a paradox that the existence of mass graves has a useful dimension in the search for missing persons. Had the perpetrators of mass executions on conquered territories of Bosnia and Herzegovina (BiH) chosen some other method for disposing of the bodies, it would have been nearly impossible to find out what happened to most of the victims who have so far been identified. They could have burned the bodies, as they did during the Holocaust, since they had the factory plants, acids, mills, and smelters at their disposal. Instead, they decided on the cheapest method – mass graves.

Figuring that nobody would ever come looking for what they were hiding, they were careless. They dug graves near major roads, leaving trails of witnesses and evidence. The perpetrators of mass murders and executions generally had no obligation to actually bury the bodies themselves. The process of disposing of bodies in mass graves was often conducted by people from the civil protection, working units, local construction, utility or transport companies, sometimes even firefighters; police officers, occasionally soldiers, provided cover. All these years, nobody has asked these people about the process or where they hid the bodies. There was nobody to ask them.

Winston Churchill once said that if you don't want a problem solved, you should form a committee. The authorities in BiH did just that. To uncover the fates of over 35,000 missing people, they formed not one but three national committees. The three committees comprised of fewer than 40 people and not a single forensic expert, anthropologist or criminologist. These committees were then rebranded as the Missing Persons Institute of BiH, which currently employs around 19 investigators. These investigators are tasked with shedding light on the fates of over seven thousand people who are still missing from BiH, but they have no official authorization to conduct interviews or carry out investigations in the field.

Members of the police force are the only ones who have the authorization, the capacity, as well as the legal duty, to carry out field investigations for missing persons. However, they neither conduct these kinds of investigations nor are they expected to. By some absurd logic, police officers watch over exhumations, conduct forensic investigations, and participate in identifying the bodies, but they are excluded from gathering information on new locations of mass graves, the part where they are needed most.

We can also notice a paradox in the approach of the judicial system. Hundreds of mass graves and thousands of collective and individual gravesites have been uncovered so far, and as yet, not a single person has been convicted for disposing of the bodies. A precise inventory of missing persons was never conducted. Anyone with any sense would first make some kind of list of missing persons in order to know who to look for. But no, here they first searched for mass graves and bodies, and then registered individuals only after the graves had been exhumed and the bodies identified. The result is that hundreds of unidentified bodies are still lying in ossuaries.

Due to the existence of mass graves, the government of BiH can pride itself on having helped achieve relatively positive results in solving missing persons cases. However, without the International Commission on Missing Persons, which opened and operated laboratories for DNA analysis, mass graves would have become mass ossuaries or “John Doe” cemeteries, rather than a resource for exhuming and identifying missing persons.

Nothing can contribute to the collectivization of victimhood like mass graves. The thing that becomes most important is the victim’s ethnicity or religion, rather than the victim’s individual identity as someone's father, brother or daughter, a good football player or lawyer. People become numbers in some bizarre competition over which communities suffered the greatest losses. The Tomašica mass grave near Prijedor, where 435 bodies were found, was proclaimed the “largest in Europe after WWII,” even though 628 bodies were exhumed from the Crni Vrh mass grave near Zvornik in 2003. But that wasn’t the largest mass grave found in the territory of former Yugoslavia. The largest, containing 705 bodies, was discovered in Batajnica near Belgrade. The public doesn’t usually remember any of the names of those found.

The extent of the public's callousness toward the existence of mass graves is illustrated by an almost unbelievable fact. In 2012, the Anadolija1 agency published the following information: “The International Court of Justice states that a mass grave with 540 bodies was discovered in the vicinity of the Manjača concentration camp. The bodies were probably from Manjača.” Bosnian media and public authorities, as well as some prominent regional TV stations, repeated this statement at every Manjača commemoration day. The thing is, a mass grave was never discovered in the vicinity of the Manjača concentration camp, near the city of Banja Luka. The International Court of Justice had nothing to do with the statement. The Anadolija agency invented a mass grave larger than Tomašica in the territory of Banja Luka and this fiction continues to pass as news. Does no one wonder who these people are, where their families are, or where they’re buried? Associations of concentration camp survivors who organize commemorations for Manjača do not mention a mass grave, and state officials who did not exhume such a grave since it was never discovered, also keep quiet, but perhaps the most compelling silence comes from the city of Banja Luka itself, where the invented mass grave is allegedly located.

Mass graves are products of collective criminal endeavors, which include more people than only those responsible for planning and executing the killings. Their discovery (and concealment) in our homeland is a deeply disturbing and alarming phenomenon, especially when it's a known fact that those involved in creating and concealing the mass graves are still free. The humanitarian approach used so far – to find the bodies, identify them and rebury them – is not enough. The story of mass graves should end in court, not underground.

Edin Ramulić is a human rights activist from Prijedor, former journalist, and editor of three editions of a book on missing persons entitled “Ni krivi, ni dužni”. Offering support for witnesses and victims of war crimes and gathering information on missing persons is his permanent preoccupation. Through his work, he aims to contribute to the processes of building a culture of memory and dealing with the past. He is the President of the Foundation for Building a Culture of Memory in Prijedor and is currently engaged in establishing a documentation and information center in Prijedor.