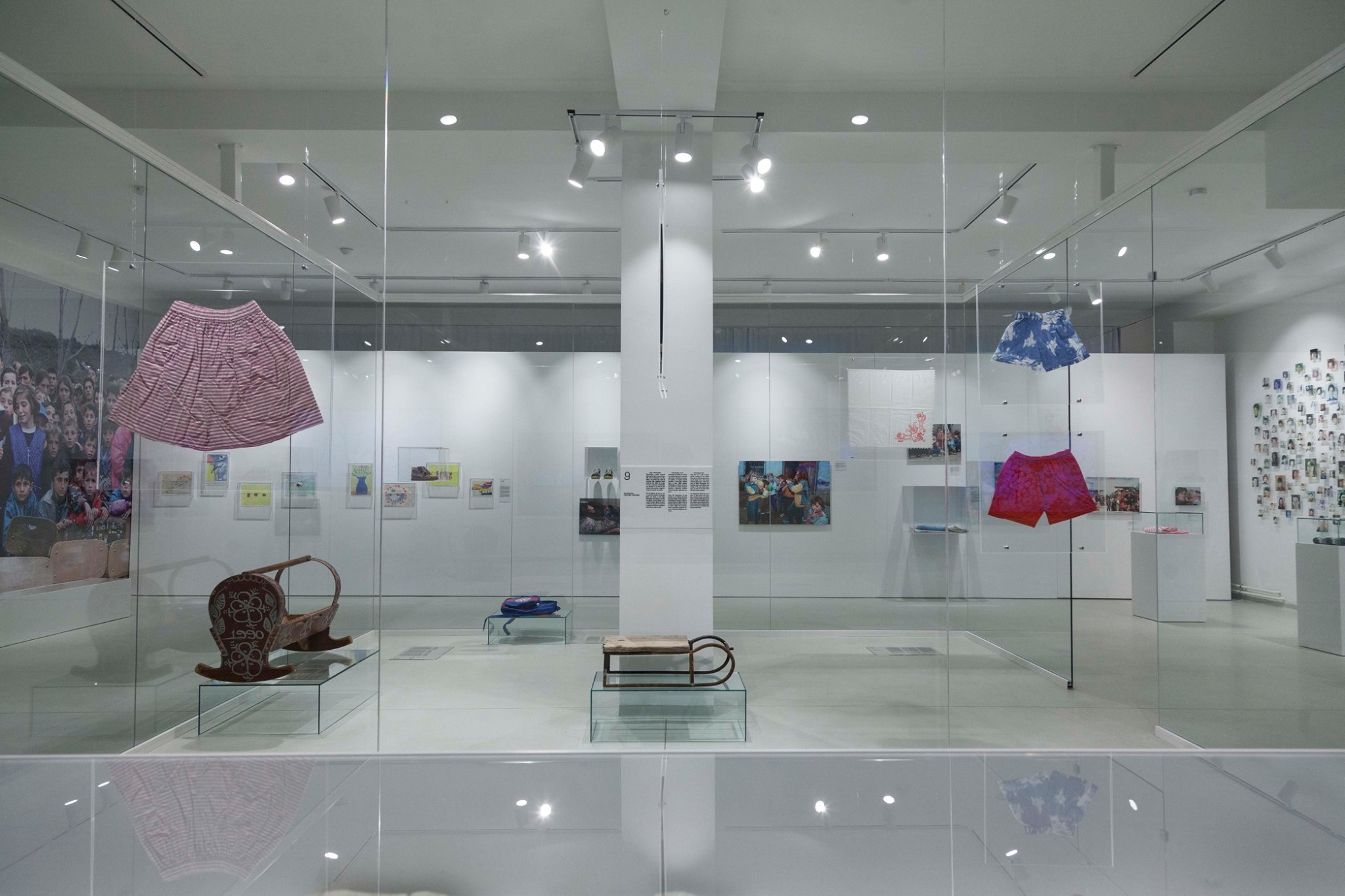 Once Upon a Time and Never Again: Commemorating the missing and killed children from the war in Kosovo

Once Upon a Time and Never Again is currently being exhibited at the Documentation Centre of Kosovo (DCK) in Prishtina, Kosovo. DCK isa project of the Humanitarian Law Center (HLC) Kosovo, a local organization that has been collecting data on human rights violations since 1997. Established in 2017, DCK is an exhibition and educational space, created to engage the public in HLC’s research and findings, and to serve as an accessible transitional justice resource.

What led to the conception of Once Upon a Time and Never Again?

Little has been done to memorialize the past in Kosovo. The state has not given priority to the commemoration of civilian victims of war in general. Particularly concerning is that one of the most sensitive topics, the death of children, has been the most neglected. Until now, there is no symbolic day of commemoration for this category of victims.

Over many years, HLC has collected information on the victims of war crimes, fallen soldiers, and those who were abducted and went missing in Kosovo before and during the war. Referring to this extensive research, conducted over many years, HLC published The Kosovo Memory Book, which serves as a commemoration to those who fell victim to the war in Kosovo during 1998. The book includes short, personalized narratives about these individuals, so as to give life to the memories of people who often have been referred to only as a number.

The high number of child victims from the Kosovo war, also relative to the overall number of victims, and the lack of attention given to them and their stories, led us to initiate Once Upon a Time and Never Again. 1,024 children were killed and 109 are still missing during that time. We saw a need to commemorate those young victims. Everyone agrees that these children were victims. There is no room to argue this point - the kidnapping and killing of children is a crime. We wanted to tell their stories.

What was the process of collecting the children’s items and stories?

Using the data we had collected over the years, we started to contact families of the missing and killed children. We interviewed them and hoped to gather any belongings and photographs to exhibit alongside their stories. After contacting the families, however, we realized that the vast majority didn’t have anything (items), as most of the houses had been burned. Families sometimes did not even have a photo of their children.

What we did see was a great willingness from the families to cooperate, even from families who no longer had any of their children’s belongings. They were supportive of the idea and still wanted to have their stories heard. This was the first time something was being done to publicly remember their children.

What did you include in the exhibition?

Of the total 1,133 killed or missing children, 100 were non-Albanian, including 50 from the Serb community. Using the space available at DCK, we worked with what we had, which was around 20 different physical items of killed or missing children from different parts of Kosovo, plus some photographs. We exhibited these along with their stories. Most children in the exhibition were from the Albanian community. Two of the items we collected belonged to a brother and sister from a Serb community. Finding families from Serb and non-Albanian communities was particularly difficult, as many have left Kosovo. We are continuing to search for these families, as we want to include as many children’s stories as possible. These stories need to be told.

How did families react to the exhibition?

This project relied on the collaboration of the families, to work with us and share their stories.

The readiness of the families to cooperate with us and with each other, showed us how communities can unite in grief. The exhibition was, in a way, a symbol of reconciliation. Families were happy to have their children commemorated alongside children from different communities. The parents had a chance to meet and connect with each other. The large turnout at the opening, which included the general public, CSOs, and the international community, showed a high level of interest in the topic.

During the opening of the exhibition, each family took turns to bring other families to the items and photos of their children and explain their stories. It was very emotional. People were hugging, even those who were not involved. It was an atmosphere of both sorrow and gratitude. It was overwhelming.

What was the impact of the exhibition on visitors?

The way the stories are told – we put the focus on the children’s lives. We give visitors a sense of the everyday lives of these children. Generally, stories tell of a simple childhood, which reminds each visitor of their own childhood.

We then present the ways in which these children lost their lives.

This way of connecting with visitors has had an impressive impact. We have seen that it invokes a sense of empathy for the victims and a greater awareness about what happened during the war in Kosovo.

As there is no graphic content presented, it is suitable to be visited by youngsters. Parents in particular saw the exhibition as a good way to open the topic of our past and to discuss what  happened in Kosovo during the war with their children.

What else is planned for Once Upon a Time and Never Again?

We aim to expand the exhibition to include the stories of more children. There are now more families approaching the center, wanting to share their stories. We want to make space for all of them.

At some point we’d like to make it a traveling exhibition, to give it visibility across the region and to encourage more families to come forward.

We are working towards creating a permanent space for the exhibition. We have the families’ support for this. For this to materialize, however, we would need the state institutions to step in and support us.

Dea Dedi is the manager of the Documentation Centre Kosovo (DCK), a project of the Humanitarian Law Centre Kosovo (HLCK). DCK, operating since 2017, serves as a centralized data center, with the general public able to request data relating to transitional justice and dealing with the past in Kosovo. It also plays a central role in HLC’s outreach and information activities and is a sanctuary for fact-based collective memory.