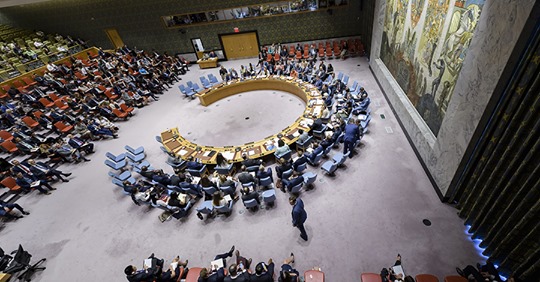 ORAL STATEMENT BEFORE THE SECURITY COUNCIL OF THE UNITED NATIONS ON 5 NOVEMBER 2019 BY SELMA KORJENIĆ, HEAD OF PROGRAM AT TRIAL INTERNATIONAL IN BOSNIA AND HERZEGOVINA

Thank you Madam President, and good morning from Sarajevo!

My name is Selma Korjenić, and I am Head of Program at TRIAL International in Bosnia and Herzegovina, a non-governmental organization fighting impunity for international crimes and supporting victims in their pursuit of justice. I am honoured to address you also as a woman and citizen of Bosnia and Herzegovina and to speak about my country’s efforts at reconciliation and dealing with the past. My message to you is based on consultations with several other representatives of civil society organisations who work on justice and peacebuilding in my country.

Where is Bosnia and Herzegovina today when it comes to dealing with the past? For the average tourist coming for a short visit, we are a country of great natural beauty with a rich cultural heritage, delicious traditional food, beautiful music and warm people. But we are also a country where some of the worst atrocities in Europe since the Second World War happened. A country where everyday life is profoundly affected by the war, which ended 24 years ago. A country still carrying a heavy burden from the past. Bringing war criminals to justice, satisfying the needs of victims and their families, reconciling peoples and communities: many of these complicated issues are not handled in a satisfactory manner.

For many years, a great emphasis was put on judicial response to the horrendous crimes committed during the war. We believed that bringing war criminals to justice would result in reconciliation, including acknowledging the suffering of victims and their families. Although some positive developments did take place, progress has been slow. At the current rate of prosecutions, civil society is very worried that our judicial institutions will not be able to meet the deadline for closing all war-time cases by 2023. For the tired and forgotten victims who are still alive today, this denial of justice increases the suffering visited upon them during the war.

The prompt fight against impunity remains of paramount importance. But to provide a fuller sense of justice to survivors in particular, and to society as a whole, the prosecution of perpetrators only will not be enough. In order to normalize relationships between individuals, as well as between communities, we also now need to fight the denial that such crimes were even committed.

Indeed, a perverse nationalistic rhetoric is now more than ever flourishing and dominating the public space. Leading political elites and the media working at their service now openly propagate denial of genocide and other war crimes, at least when the crimes in question have been committed against the “opposite side”. This discourse is accompanied by the increased glorification of the criminals from one’s own community.

Let me give you some examples:

Public spaces such as streets, memorials and monuments have been named after convicted war criminals, thus justifying atrocities committed by legally convicted individuals. In the town of Pale for instance, a student dormitory has been named after Radovan Karadžić. In another location, Nevesinje, a mural of Ratko Mladić has been unveiled.

When verdicts are rendered against a member of a community, nationalist circles often reject it, for example recently in the Prlic case. These groups concentrate their attention only on the crimes committed against their own community. This biased celebration of past crimes, instead of acknowledgment of the full truth and the acceptance of the suffering of all victims, whatever community they belong to, takes many forms.

International and national courts are often undermined. During public meetings, photographs of convicted war criminals are brandished. Some of the perpetrators released from prison are now welcomed at gatherings of leading politicians. Some are even elected to political positions, such as convicted criminal Fikret Abdić, who became mayor of Velika Kladuša. Associations are created, which bear the names of war criminals. Even fascist organizations do not fear to appear in public anymore.

Compare this with the public admission of past crimes. There are indeed almost no monuments or memorials universally dedicated to war victims. Often the initiatives for building memorials for victims are politicized even at the local level. This further frustrates survivors and their families, thereby preventing efforts at just satisfaction and robbing them of their right to commemoration. In contrast to war veterans, civilian victims, in particular women survivors of sexual violence have been fighting many years for their voices to be heard and still have not been granted equal rights.

Efforts at peace-building and reconciliation are fundamentally blocked at all political levels. Peace-building and reconciliation are not main concerns for most politicians and, tragically, for many politically inclined media. It follows that even positive stories which show the normalization of relations between individuals and communities are often silenced and rarely find any place in the public arena.

Sadly, objecting to the nationalist rhetoric entails risks. Those who dare to look at the past objectively, with a real concern for the fate of victims, those who voice dissenting views about the events of the war are often exposed to public attacks. They receive threats, and sometimes have to leave their home or even their country in search of protection, because state institutions are unable to protect their citizens from such intimidations.

Even schools fall under the influence of such policies and views about acceptable truth concerning what happened during the war. Yes, some formal educational programs create the basis for future distrust towards the other communities, keeping alive the possibility of conflicts in the future. For example, a new history textbook in the Republika Srpska glorifies one of the worst war criminals, Radovan Karadžić, as a poet and the first president of the Republika Srpska, without providing information about his responsibility in genocide and numerous crimes against humanity. Nothing is said of his conviction to life in prison by the International Tribunal for the former Yugoslavia.

Such retrograde narratives are on the rise, and cause tension among an already divided nation. Three generations have now tasted the poison of hatred. Very little is done to prevent the same fate happening to the next.

But there is still a glimmer of hope. Work aimed at bringing justice to affected individuals and communities, and engagement towards reconciliation and peace-building does happen. And there are even successes to celebrate. But such work and engagement result from the dedication of civil society organizations, human rights activists and individuals, who seek to normalize relations between individuals and communities through their activism. Some victims and survivors are more and more active in their quest for justice and to rebuild themselves, with the support of numerous civil society representatives. My organisation has for example been working alongside and supporting victims of the war, including numerous survivors of sexual violence, for the past 12 years. This long-term involvement, coupled with a constant engagement with the authorities to uphold international standards and to implement the basic human rights of victims, has made justice processes a little more efficient, fair and inclusive. These results, combined with successes from other sectors of society, show that initiatives taken by human rights activists, by local civil society organisations, by war victims, by former members of opposed armies, by youth from different ethnic backgrounds, by individual religious leaders spreading messages of peace and tolerance, can really sow the seeds of justice, truth and reconciliation.

Ordinary citizens want nothing more than to leave the war behind and look towards a brighter future. Clearly, ordinary citizens are not the ones preventing peace. But without the support of the State, and a comprehensive institutional approach, reconciliation cannot have long lasting effects. Without a concerted effort to fight denial of past crimes and to combat nationalistic rhetoric, Bosnia and Herzegovina will continue to be a ticking time bomb.

Next Saturday, we will be commemorating the destruction of the famous Mostar Bridge. It was on November 9, 1993 that the Old Bridge of Mostar was destroyed.

It has since been rebuilt, but Bosnia and Herzegovina still needs the support of the international community to rebuild numerous bridges between people and communities.

For that, I would humbly formulate two paths for the consideration of your Council:

 First, do not let denial and hate take stronger roots. The international community should not fear to engage with Bosnia and Herzegovina on stricter terms. Do not fear to demand respect for the verdicts rendered by international and local courts; please make sure that denial, minimization or justification of all crimes, against whoever they were committed, be banned; request that victims see their right to justice, truth and reparations be fully implemented. Only under such conditions will we be able to move ahead as a nation and to reconcile with each other.

 Second, please do not despair of Bosnia and Herzegovina. As a young Bosnian woman, I will not despair of my country. I want to leave it to my children free of the poison of hatred. There are many wonderful people here, especially from multiple sectors of civil society, many human rights activists who fight on a daily basis to make this country a better place. Our civil society needs your trust, we need your help and we need you to support the initiatives aimed at rebuilding bridges and delivering justice and reconciliation.

I thank you for your attention