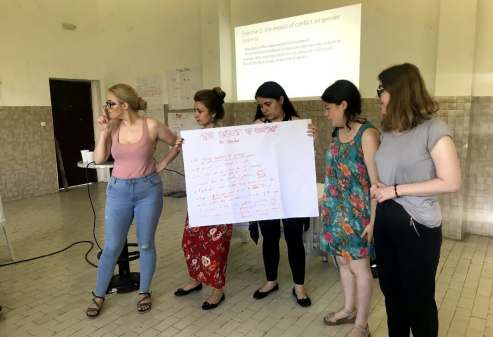 Can we build a peace without gender equality?

In Bosnia, we don’t really care about gender equality. We consider it irrelevant because we live in a patriarchal society still heavily influenced by tradition. All three nations from these regions have a negative attitude towards women, whether due to the strong influence of religion or some other factor, it is difficult to say. Imposed beliefs through the ages, patriarchal heritage, and behaviors are the ones that have trapped us in the shackles of prejudice, stereotypes, and degrading opinions. The Bosnia and Herzegovina European Integration Monitoring Initiative, an informal coalition of civil society organizations, on the situation of women’s rights and gender equality, recalled that women in BiH are subject to multiple discrimination. Women in Bosnia and Herzegovina face different challenges on a daily basis. When looking for work or at work, they are often exposed to mobbing, sexual violence, various types of threats and fear. Many employers avoid hiring a woman for the reason that she can take advantage of maternity leave. Men are the ones who are in politics in top positions and with high salaries. Domestic violence has increased in the last few years and is manifested through physical, sexual, psychological, and economic violence.

If this is the case in times of peace, imagine what is like in times of war. Bosnia went through a difficult war twenty-five years ago. There is an old saying that everything is allowed in love and war. People in this region are convinced of the second part. They have been through a lot–murder, rape, destruction of property… Amnesty International warned in a recent report based on a two-year study that more than 20,000 survivors of sexual rape are still seeking justice that has been denied them. During the war, thousands of women and girls were raped who, even today, lack the necessary medical, psychological, and financial support they desperately need to patch up their war-torn lives. Twenty-four years after the end of the war, women victims of sexual violence in Bosnia and Herzegovina continue to suffer, not only because of the consequences of the crimes committed to them, but also due to the fact that they are neglected by authorities at all levels in BiH. Many women were prisoners exposed to persistent sexual torture in so-called rape camps, forced to give birth to children after being raped, others raped by various military or paramilitary groups whose members made a living over the civilian population.

After all of that we still suffering. Our wounds are still fresh. In that kind of situation it’s hard to even think about gender equality.

However, I think we have neglected gender equality to such an extent in BiH that we deny that there is inequality between man and woman. In Bosnia and Herzegovina, we simply have much bigger problems than equality between men and women. The country is full of corruption. BiH citizens are moving out of the country massively because of low salaries, poverty, the threat of politicians that Republika Srpska will secede from BiH… In such a country, basic human rights are hardly respected.

The first step toward repair is always acknowledging the problem. We have a lot of problems that we need to work on, and I want to work on the problem of gender inequality because I think that one of the paths to peacebuilding is gender equality. Some ways to build peace are: 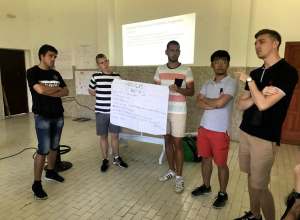 I hope that we will make progress over time. I know it’s a long process but I also believe that we will never make progress until we take action. So far, I have personally participated in many conferences, seminars, and trainings on this topic in Bosnia and Herzegovina. I ran some workshops about misogyny. After all, I can say that as a society we are still far from solving this problem. I have heard countless times that women were created just to look after the house and raise children. Sometimes I think women have a lot to blame for inequality because we perpetuate negative stereotypes. For example at the time of an election in the RS, a female RS presidential candidate joked that she would play as her male colleague sings. It seems like women are still a joke when it comes to their representation in politics. I believe that gender equality cannot be achieved without men, but we will see how willing they are to raise their voice when it comes to this.

I know that we are still far from the goal of gender equality, which is why I want to end this with a quote by Martin Niemoller, German Lutheran pastor, who is better known for his resistance to the Nazi regime before the start of World War II:

”First they came for the socialists, and I did not speak out—Because I was not a socialist.

Then they came for the Jews, and I did not speak out—Because I was not a Jew.

Then they came for me—and there was no one left to speak for me.”

I hope something like this doesn’t happen to us.