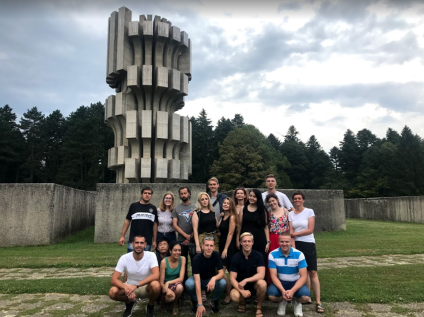 It was my pleasure to participate in the Project on Peacebuilding in Prijedor. The reason for my application was a suggestion from my organization, SVITAC, which I joined in 2012. SVITAC has  worked on peacebuilding in north eastern Bosnia since 1998.  My goal was to present our results and to learn what youth from other areas think about life together in Bosnia and Herzegovina. The first welcome meeting with one of the coordinators was important to make me feel as comfortable as in my own town. After that my challenge started.

During this project, we lived all in one hostel in Kozarac. This was useful for me to discuss with other young people about the positive things from Brcko District, as a place where three nationalities live together after conflict.  I spent 8 days in a room with 5 roommates. I really enjoyed discussing with them about youth life in their area. We also helped each other and had a lot of fun. One of my favorite moments was when I watched my favorite football team (Red Star Serbia) with one of the other participants from a different nationality. During the football match, we shared our experiences in sports, the economy, and the education system in the Western Balkans. We were discussing these issues because of the workshop that day in Ljubija where we learned about what life—especially the economic life—was like there during Yugoslavia. It was great to find the conclusion that we are all people with the same problems and we can only solve them together.

The best moments during the Project on Peacebuilding were during the last two days when we conducted a survey. The first day I ran a survey in the Kozarac village. I talked with a lot of people, but a most of them didn’t want to complete the survey because they associated it war and conflict. Many people had similar opinions that everyone is already talking about past. They also said that a lot of people left Kozarac because of education, health, and employment problems in Bosnia and Herzegovina.

I think the conclusion is that we need to work more on developing a non-formal education system that involves communication and better understanding between young people in order to have a better future here. Young people should be employed in public companies because it leads to the development of the country and less people leaving BiH. I’m not sure that protesting against the government is going to move the country forward. People from all ethnic groups need to work with the government and make the right decisions to move in the direction that will encourage a better life for all people of Bosnia and Herzegovina. My message for everyone is to “live in peace because life is like river without repetition.”