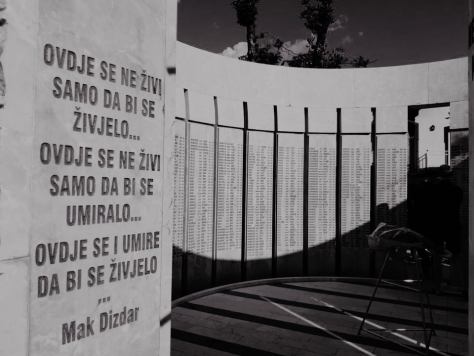 In Bosnia, we like to say that there is nothing without memory. But I wonder what memories are left after the 1992-1995 war. A culture of monuments actually includes all the material remains that bear witness to past events in this region. Every day we pass such places: to some the monuments are symbols of suffering and sorrow and for others they are symbols of heroism. The situation is further complicated by the fact that after the war in BiH, especially in the Prijedor area, the main narrative does not include the memory of all the victims.

Trnopolje had the biggest impression on me. A memorial for the creation of Republika Srpska proudly rises next to the place where the Trnopolje camp was located. The paradox is that this place is not marked with even a single memorial plaque for the thousands of people who were held in inhumane conditions. In this case, we see how the monuments can serve both for remembering and forcibly forgetting. Only a few people who survived the camp after all the pain and suffering are able to find the strength to talk about what happened there.

During a moment of silence, I had a realization that I couldn’t comment on. There is real cruelty in human life. All I could do was stand and wonder: where next?

It’s been 25 years since the war and we still don’t have a memorial designed for all the victims in the Prijedor area. The legacy as it exists is colored by religious and national symbols that create a sense of discomfort. Religious symbols on monuments often give the impression that people of only one religious affiliation lived and lived here. Also, it is very stressful for these survivors to look at all those war symbols that continue after so many years.

Comparing this with the monuments of former Yugoslavia, the difference is obvious. The monuments of that period, as well as the socialist regime, were not perfect; but artistic thought prevailed during the construction of monuments. I believe that building such a memorial in Prijedor with artists from all sides would be the beginning of efforts to build the path to recognition. Because in art, there are no divisions but only a feeling. People need a sense of recognition and freedom, and art provides the opportunity to do so. That is why I think that initiatives from the RS and the FBiH, and generally from artists of different nationalities, would show that this is a way to break down barriers and start working on things from the past.

Without acknowledging all the crimes in all places, we cannot build a peaceful future in Bosnia and Herzegovina. This is especially important in this region. In Kevljani, in Kozarac, in Prijedor… where human malice was rushing, now we have to learn to build peace together.