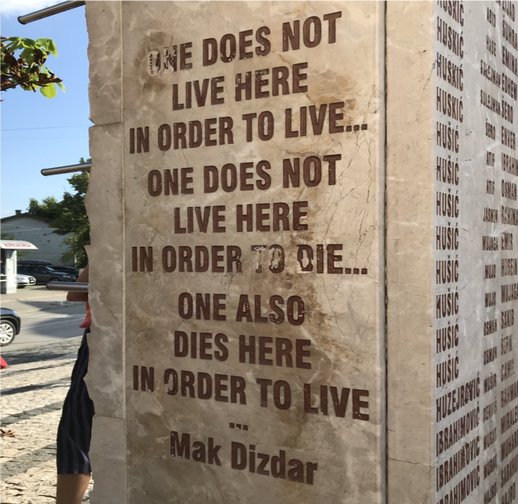 As someone who is from Bosnia and Herzegovina, I was already familiar with what happened in the Prijedor region in 1992. However, it wasn’t until I took part in Most Mira’s Project on Peacebuilding, that I had the chance to visit the actual location of the horror. On day 4 of the project, we visited Trnopolje, where the Youth Center KVART organized “Night at Trnopolje” Commemoration at the place of the former concentration camp. No matter how resilient I was to this kind of event, it was really hard to watch testimonies of the survivors. Our dinner was delivered there but I could not eat. It was hard to talk. But what struck me the most was that only 50 to 100 people attended the event. Now, I understand that visiting Trnopolje is not the easiest decision, but it is important to keep these things in public memory. History tends to repeat itself, and if we do not learn from our past, it will repeat again. If we do not educate young people, they will be condemned to make the same mistakes.

Going back to places of horror is difficult, especially for the survivors. However, I believe if people support KVART and other non-governmental organizations in their endeavor to promote peace, many more would come to the commemoration. The commemoration was important because visiting a place like this can teach us something we cannot learn in classrooms.

On day 5 of the project, we visited Omarska mine. The iron ore mine was a concentration camp for more than 3,000 non-Serbs. It was a place of harassment, torture, and murder. In 2004, Arcelor Mittal group bought the mine and restarted the production. The new owners agreed that the mine will stop its operations for 24 hours in order to facilitate the commemoration.

Our guide, Kemal Pervanić, is one survivor from the camp. He witnessed the horror in Omarska camp and he talked about his experience in the interrogation room. Furthermore, he described the living conditions in the camp and shared some of his personal insights.

Both visits to Trnopolje and Omarska made me think about reasons why people go to commemorations like these and why they do not attend. I felt that more people could have come to the commemorations.

In the end I have to say that the aim of this text is not to criticize people for not attending. Instead, I would encourage people to visit commemorations in Omarska and Trnopolje as I believe they are very important. People can learn about the past firsthand and get an insight into the horrors that occurred.

Many survivors of Omarska and Trnopolje also told us that the commemorations were particularly important to them. So, as a sign of solidarity, and in order to understand the pain of others, I would advise all Bosnians to attend these commemorations. This is something everyone should do. In order to learn about the past, people need to visit places like this. A road to the future is easier when we face the past.