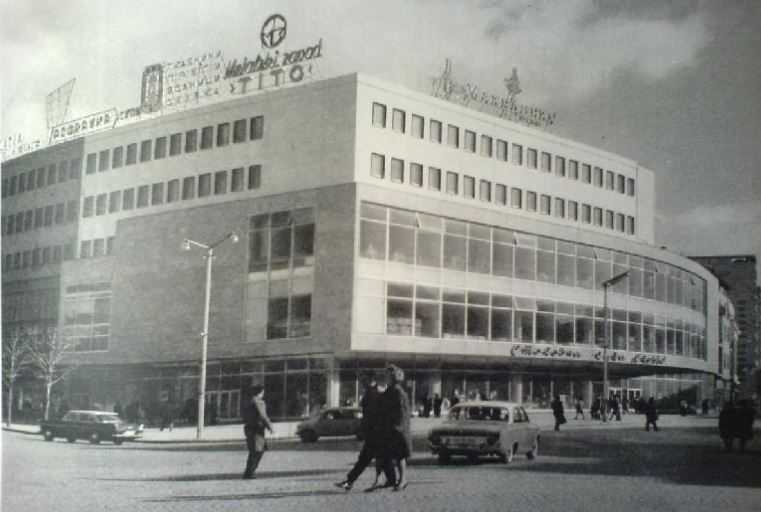 When we talk about memorialization in the society of North Macedonia we tend to reflect on monuments and their function in our culture. Through monuments we remember some distant times and the heroes who are memorialized. Throughout the project Skopje 2014, monuments were again a target for discussion, since we witnessed how new monuments were installed. Different heroes, from antiquity to modern history, caused a debate in the society in terms of whether we should celebrate historical figures who are largely unknown. On the other side of the debate, these monuments represented a memorialization of historical figures who have contributed to the creation of the state, and precisely because of that, supporters of the projects thought it was the right time for the citizens to get to know them.

One building that was considered a genuine mark of the city was the building of NA MA. An architectural work of Slavko Brezovksi from 1959, it is considered as one of the first modern structures in the city. In the memories of the older generation of Skopje, this is not simply a shopping mall. For the first time in its history, Skopje had received its first “trading house”, where people from different backgrounds could freely shop and get to know each other. At its peak, the building was considered a meeting point for the citizens of Skopje, a place to meet friends, shop or simply relax.

However, with the Skopje 2014 project, the building started to change. It got a new façade and the building simply lost itself within the sea of new and refurbished buildings in the central square. To understand whether the building has lost its original mark, whether the people still recognize it, and how this building can be freed, we spoke to Blagoja Bajkovski and Marina Tornatora. Blagoja is a PhD Student at the University of Reggio Calabria and Marina is his mentor. Together they work on the project “Freeing Space” with 10 other architects from North Macedonia and Europe. The main goal of this project is to redesign part of the existing infrastructure in Skopje’s central square.

For us, working on NA MA, designed by Slavko Brezovski in 1959, meant first of all to develop a research of its “writings and cancellations” in different phases of its historical development and at the same time, think of what it can become today for contemporary Skopje during this period of globalization.

NA MA represented a symbol of modernity for Skopje, designed with the then recurring architectural elements that follow European architecture of the first half of the XX century, such as free planning, large windows, cantilevers, and innovative vertical connections like the escalator.

These specific architectural qualities have made NA MA a symbol of the city’s modernization and progress, making it an “attraction” for citizens beyond the commercial function for which it was conceived.

The transformation of the modern architecture of NA MA, a remarkable example of shaping an urban block, consisted of the cancelation of its qualities by covering it with new false eclectic surfaces. This action denies the principles that characterized it and negates the dialogue it had established with the other nearby modern buildings, such as the Economic Chamber built in 1933 by Milan Zloković.

Research, publications, exhibitions and events like Freeing Space, that elaborate on the modern architecture in Skopje are indispensable as a testimony of the history for the newer generation, and, moreover raise awareness about the importance of the architectural heritage inherited by Skopje during its reconstruction after the devastating 1963 earthquake.

These reflections are the basis for our project that, through the process destratification ’29 ’65 ’14 ’20 tries to highlight the elements of the building, in order to narrate its own history.

The “project” of SK2014 did not confront the qualities of the original interior spatial configuration of NA MA, which were in conjunction with a continued perception of the space, its flexibility and transformability, or the influence on social inclusion – the use of it as a vast commune space, or the qualities arising from the articulation of its volumetric composition. The question that emerges today is not so much about the number of “users”, who no longer are considered “visitors” since it became just another globalized shopping center, but about how this transformation has changed an architectural structure into a mass production building that does not belong to the history of Skopje.

One of the messages that the project intends to transmit is the idea of architecture being conceived as system of relationships. The intervention of destratification ’29 ’65 ’14 ’20  brings in the relationship with the main square, that penetrates inside NA MA, creating a new covered public space, and thereby establishing a continuity with the back courtyard.

The inclusive potential of the project can be also be observed in the transformation of NA MA into a cul­tural district, converting it from commercial building into a creative incubator  with the intention to create a new network between the existing museums, art and cultural spaces, scattered in different parts of the city with diverse social, cultural or ethnic background. NA MA should include temporary exhibitions, collections and productions of digital arts & crafts with a permanent exposition of bruta­list architecture, perceived as an impor­tant feature of Skopje’s identity.

As the title of the project implies, destratification ’29 ’65 ’14 ’20 intends to bring in evidence of the diversity of different layers that represents different historical phases of the development of Skopje and NA MA, the regulatory plan for Skopje from 1929 by J. Mihajlović, the master plan of K. Tange from 1965, and the intervention of SK2014. This process of decomposition of the layers seeks to discover the history behind them, and to emphasize, on one hand, the qualities of what once was there and on other hand the banality of the new intervention.

The destratification ’29 ’65 ’14 ’20 intervention retra­ces the original project as a monolithic structure, molded in transparent concrete. The actual eclectic façade is treated as a surface painted in black, to deny its plasticity, and a strong cut that insinuates the wound that the recent interventions have left on the city.

The interventions from the post-earthquake reconstruction of Skopje have this in their genetic code, expressed through the treatment of public space. The building of the Cultural Center with the building of the Macedonian Opera and Ballet as a topographical articulation of the soil that penetrates inside the building, or the City Shopping Center of prof. arch. Živko Popovski, conceived as urban platforms that stratify the public space on different levels, are just several examples, that in their compositional articulation, the public space intertwines with architecture, or architecture becomes public space.

The intention of the intervention of destratification ’29 ’65 ’14 ’20 is not to negate or invalidate the existence of all that came before. It goes beyond the tabula rasa approach, that means it operates without the constraints of existing conditions, and implements part of the tabula plena approach (term used by Otero Pailos) that connotes to the observation of urban sites as filled with existing buildings from different time periods.

Blagoja Bajkovski is a PHD Student at the Department of Architecture and Territory – dArTe – Mediterranean University of Reggio Calabria. In 2014 he gained a master degree with merit in Architectural and Urban Design at Politecnico di Milano. From 2013 to 2016, he was engaged as a teaching assistant at Politecnico di Milano, Piacenza. At this moment he is part of the research group at the research laboratory Landscape_inProgress and he is doing his PHD research on the topic of Atlas of Brutalist Architecture in Skopje under the mentorship of Marina Tornatora.

Marina Tornatora is a researcher in Architectural Design at the Department of Architecture and Territory – dArTe – at the Mediterranea University of Reggio Calabria. She is a Scientist responsible of the Landscape_inProgress, research laboratory, a member of the Doctorate Board and responsible for the international relations and the double degree program. The focus of her theoretical, design and teaching activities is the relationships between the city, the landscape and architecture. Currently she is involved in the experimental project Architecture#myBook, a digital archive that uses open source systems merging the teaching and the theory of architecture.

Some of the recent research activities they have developed together are:

_#99FILES, an innovative and multidisciplinary platform that through an international call collects and elaborates materials for the brutalist architecture in the Balkan area. The first edition that elaborates on the city of Skopje was concluded with an exhibition that took place in the Museum of Contemporary Art in Skopje_MoCa;

_ Freeing Space, XVI International Biennale of Architecture in Venice, 2018. Exhibiting the research and design project SKOPJE DESTRATIFICATION ’29 ’65 ’sk14 ‘2020 regarding the current transformation of the architectural modern legacy in North Macedonia.