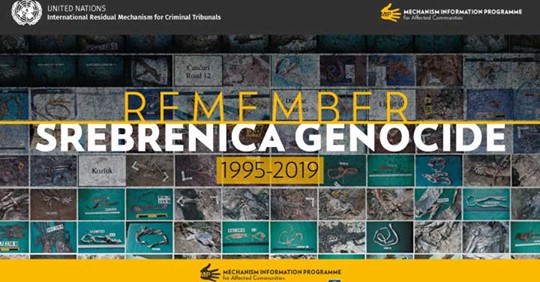 The International Residual Mechanism for Criminal Tribunals (Mechanism) has today launched a media tool kit page, aimed for use by the media as part of the wider coverage of the 24th anniversary of the Srebrenica genocide. In addition, on 9 July 2019, as part of the commemorations, the Mechanism’s Information Programme for Affected Communities (MIP) will launch a social media campaign, entitled “Remember Srebrenica Genocide”.

The media tool kit page provides selected case information, including case summaries, key documents and guilty pleas, as well as a compilation of archival audio-visual material, from cases completed before the International Criminal Tribunal for the former Yugoslavia (ICTY) and the Mechanism relating to crimes committed in Srebrenica in July 1995.

The social media campaign, to be launched by the MIP, will run from 9 July to 18 July 2019 and will mark key events that took place during this period in Srebrenica in 1995, as established in the cases completed before the ICTY and the Mechanism. The campaign will feature a number of short informational videos, infographics and social media posts, using archival material that has been admitted into evidence in proceedings before the ICTY and the Mechanism, such as witness testimonies, original audio-visual material, military reports and forensic documents.

The MIP was launched in January 2019, with the aim of contributing to an increased awareness and knowledge among the affected communities about the 1990s conflicts in the former Yugoslavia, based on the ICTY and the Mechanism cases. The Programme is generously supported by the European Union.