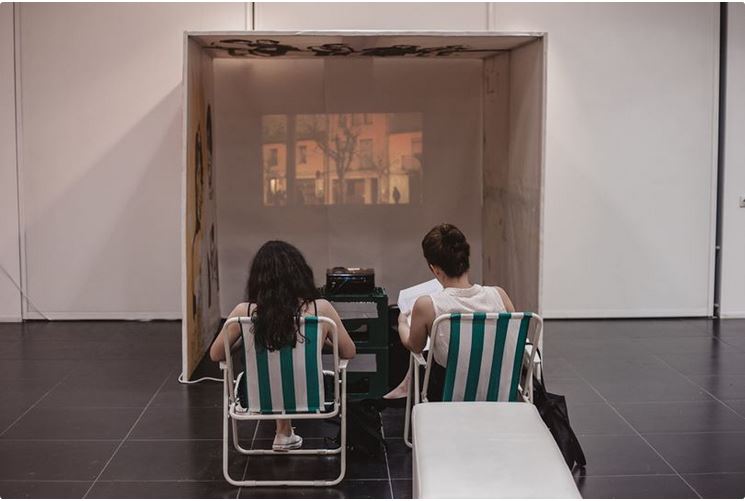 In Situ is the first international art festival of its kind in Skopje, where artists from Macedonia and the world can exhibit their works in three sections - visual arts, design and architecture.

The festival director, Bojana Stojmenovska, says that the festival gives individuals an opportunity to confront the past by using the space, audience and context offered by the exhibition, to enable the elaboration, communication and interaction of the subject.

This year, the exhibition was held from 13 to 15 September, at the Youth Cultural Centre (MKC), and featured works by over 100 artists.

How did you get the idea of organizing such a festival? What was the stimulus and how did it develop over the years?

When I started to organize this festival, I realized that one of Skopje’s traits was that it tended to break things up instead of bringing them together. There is a lot of content, but sometimes a person cannot find that content within a single place. It must rather be sought out and this has become more and more pronounced. I realized that there was potential to do something about that, and just then we started with the good experience of Paratissima in Turin (in 2014) and replicated their show here, as a successful example of creating a single homogeneous scene which would grow naturally by itself. There was a great deal of scepticism by everyone who was invited to cooperate. They told me that it was pointless, that it could not be done. Sometimes I even told myself that I was embracing something that was completely crazy, and on the other hand, I was had sudden attacks of a certain kind of spite and defiance because I experienced it as a provocation. With us, the tendency is to criticize all the time, but no one is trying to change anything. The prevailing opinion is that nothing can be done, as if we are living in a place that is cut off from the world, but in fact there are many people who have a sincere intention and interest in contributing to making something else turn out differently. At the beginning, it was treated as an alternative event where people connected with art and misunderstood by society gathered, however it evolved into an event where new things, new talents and individuals could be found.

What is the main goal of the festival and what is the message you want to send? Do you think it reaches the audience?

The message we want to convey, particularly in Macedonia, is that it is great to develop competition, but collective responsibility in any department, and especially in this one, is essential to raising the standard of how things are presented and how this is communicated to the audience and how new potentials and innovations are brought to the surface in everything that we do. We send a message that the space and time have been created where we should prove that it is possible and functional, and that from now on it should be something that would grow. However, I would not want to see growth alone, I would like to see growth in everyone who believes that they have something to contribute. I honestly think that the message has touched the audience.

Why are multicultural festivals having difficulty attracting artists from the Balkans?

I think that in the Balkans, we generally tend to underestimate each other, and the prevailing opinion is that everything coming from the West, or outside the Balkans, is better than what can be achieved in the Balkans, and that nothing that is done here can compete with a different scene. The fact is that our resources are limited, and we are lagging in many things that are not related to whether we can cooperate or not. I have the impression that we are avoiding each other, that we want to go somewhere further thinking that someone else is better and knows more then what we might know or do. In my experience, I honestly cannot say that there is a difference in the quality and in the seriousness and professionalism of the Macedonian, Balkan and all other authors and scenes. There is a different type of ex

How does art affect how we deal with the past?

Here, in the Balkans, I think that this is more pronounced due to the breakup of Yugoslavia and the separation of countries, we all have a collective and common past that may not be so pronounced in these generations, however it is still passed on from generation to generation, especially through the memories of the days passed. I think that this kind of event helps, particularly in that confrontation, that things that seem to be perceived as differences, when united in one space and when encountered at a particular time and place, are not differences, but rather advantages. I suppose that, for every Western Balkan country, facing the past is different, naturally because the circumstances are different. However, I think that these stereotypes and misunderstandings are overcome quite easily when they are tackled at such events as these, because the atmosphere is informal, it is related to something that is aesthetic and exits the context of everyday political developments, even though many of the authors naturally transfer their political and national and gender interpretations through their work. Generally, they deal with the same existential questions, with the same considerations, with the same global context. At the festival, they associate with each other, there are no language barriers, there has never been any problem whatsoever.

Why does the art scene in Macedonia not confront the past?

I think it does, but I think it confronts it in a different way. My view is that it should not be treated superficially, that the addressing of that issue and its treatment within the framework of culture and art should be something that has been backed up by research, by confrontation that should cover several years, so that when it comes to the end it has a clear result. Any superficial treatment of this problem of dealing with the past tends to attract more problems rather than solve them. The reason being that it looks as if the culture and the artistic sector do not deal with this topic because it is a process of research and it starts from the self-exploration, i.e. self-awareness, then it shifts towards someone else, and then it moves from a single collective towards another collective. The topic is too complex to be common. I am not saying that it should not become more frequent, but I think it should be treated with particular attention, because I am sure that the personal perspective here should not be intrusive, it should be more open than closed. Facing the past should be in line with facing the future. It should be something that has been backed up by essential thinking, not only of something that will be said or exposed, and only presented, which is superficial and creates a greater confusion, rather than offering a certain confrontation.

How will this festival change this situation?

I think it changes the situation because there is no author selection process as to who will present their work, regardless of their gender, age, format, subject of ex

How do you assess the cultural and art scene in Macedonia?

I think that in general Macedonia is not sufficiently developed as the art scene is primarily centralized in a large part in Skopje. There is a rather insignificant number of events outside Skopje, and I think that the events outside Skopje are successful and only prove that they need to be organized more. There is little communication between the organizations dealing with culture and art and there is some resistance, due to competition or ignorance, however I think that in the last 4-5 years there has been exceptional progress in terms of quantity and quality. Regarding the quality, I think we still have a lot of room to fill. That does not mean that what is now being marketed has no quality, on the contrary, it does have quality; however, due to the lack of resources, and as a result of the isolation imposed in part by ourselves, and in part by external factors, there is less experimentation and fewer innovations than I personally would like to see. I have the impression that at times it is relatively uniform, although this does not reduce the quality of what is being presented. I am missing experimental representations, especially since having in mind the developed technology I do not think that they are so unreachable or problematic to develop. I think that people are too preoccupied with the political developments and this takes away from their creativity. Art has always been a medium that has progressed the most during times of dire and difficult circumstances, and the least in times of prosperity.