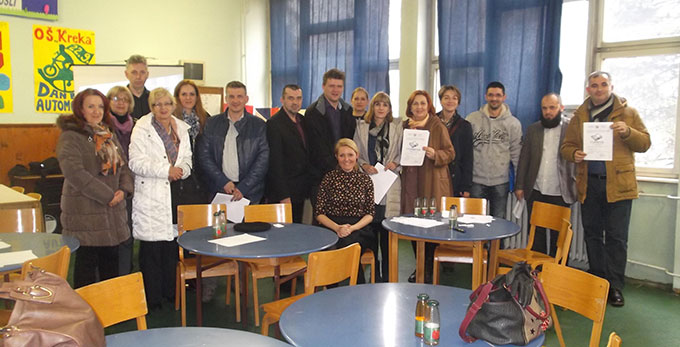 After a series of 10 trainings of the trainers about "MemorInmotion" -the pedagogical Tool on culture of remembrance, initiated, created and edited by forumZFD in close cooperation with the partners -EUROCLIO-HIP BiH, Anne Frank House, YIHR, pax christi Aachen, teachers, historians and experts in Dealing with the past-, 130 teachers, professors and actors of organisations working on peace education were trained on implementing the Tool in their fields of work during the period March-November 2015. The project partners received about 30 written reports and feedback so far on the successfully implemented Tool with students in BiH, Germany and Serbia. As "pars pro toto" of the experience gained and as sample of the impact produced in the field, EUROCLIO- HIP BiH, which together with forumZFD is editing an evaluation document on the realised trainings and implemented Tool by the end of 2015, is pleased to stress the following positive development which shows gives an overview of the inherent didactical potential of the Tool when it is used by motivated and engaged trained teachers involved in the project:

Amra Hasić, Historian and Professor at the High School " Meša Selimović" of Tuzla, attended the 2 days training of trainers organised by forumZFD in Tuzla in June 2015, in order to get introduced to the  contents, methods and objectives of the pedagogical Tool about culture of remembrance " MemorInmotion". After she got certified as trainer and gained the skills for transmitting her knowledge to the students, together with her colleagues Daria Vilušić and Edina Hrustić, Amra organised workshops in classrooms of the High School, based on "MemorInmotion". 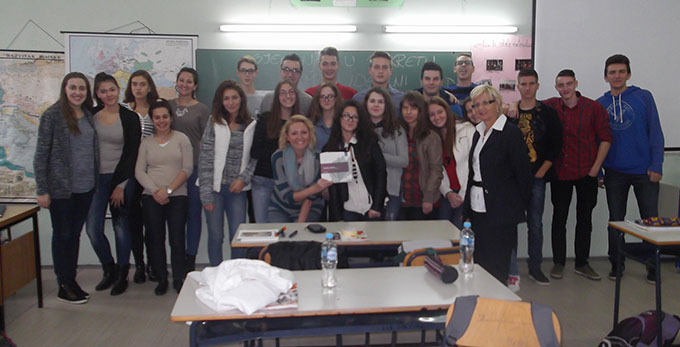 Impressed by the impact she reached at the groups of students regarding alternative, inclusive and creative ways of dealing with memory, history and the past in group work, she took the initiative to address some official letters to the Pedagogical Institute of Tuzla Canton, to the Dean of Faculty of Philosophy at the University of Tuzla as well as to the Academy Council of the Faculty. In her correspondence she, on one side,  explained the important role of the pedagogical tool "MemorInmotion" in both primary and secondary education. On the other side, at the university education level, especially in the Department of History, she emphasized that it would be desirable to do further workshops based on "MemorInmotion", which would help to better understand the essence of the monument, express teamwork, creativity and communication among young people and future educators.

The resulted good news is that the Pedagogical Institute of Tuzla Canton adopted her proposal for additional workshops for professors and schools and already organised a new workshop at the Institute .for Professors.  In the meantime, also her letter was passed on the Teachers’ Council at the Faculty of Philosophy at the University of Tuzla, and she  was given approval to organize workshops in cooperation with the Department of History for students (1st-4th year of studies). At the moment, Mrs.Hasić is developing a workshop plan for the entire school year 2015 /2016 at the University level, with the intention expressed by the Faculty to also continue the project in the next school year.

For 2016, motivated by the numerous similar feedback and reactions provided by the trainees on the Tool and convinced by the interest of teachers and educators in further working on education and culture of remembrance in formal and non formal sectors, forumZFD in close cooperation with EUROCLIO-HIP in BiH ( the European Association of the History Teachers and Educators and partners, plans to edit a new updated and improved edition of the pedagogical tool "MemorInmotion" in BCSM (Bosnian-Croatian-Serbian-Montenegrin language), as well as in Albanian, Macedonian, German and English, and so to extend its accompanying educational  programme and trainings to the Western Balkan region. Beside the new edited Tool, an educational portal on culture of remembrance " MemorInmotionline" will be developed and  integrated into the webpage www.cliohipbih.ba. On December 2016, a Regional Conference " Education and Culture of Remembrance: the Actors, the Lessons, the Tools " will be hold in Sarajevo.

The project partners warmly invite other interested actors in DwP processes to be part of this promising challenge offered by "MemorInmotion" and benefit from it.