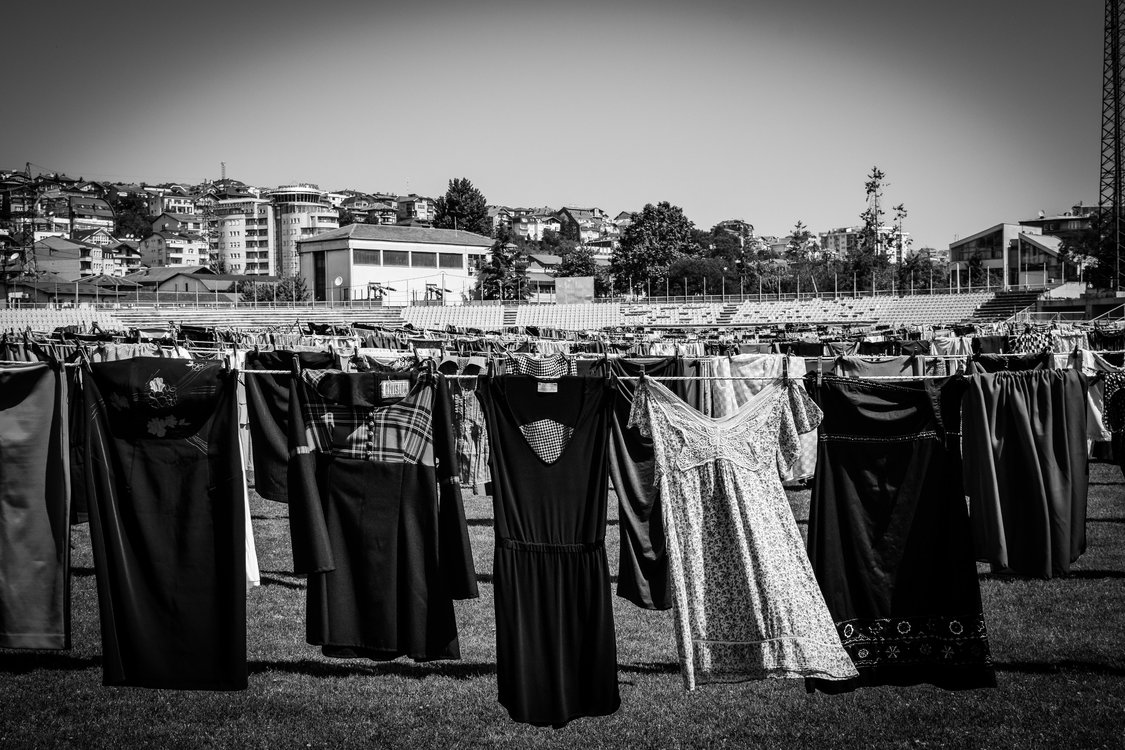 The Power of Art in Dealing with the Past

One of the biggest actual challenges is how to properly deal with a variety of issues that affect the essence of the society. When the past is locked inside the drawer of history, the present is burdened and there is no room left for change. Often, this is a consequence of political interference because it is convenient for politics to write history to suit specific interests, or, in the case of Kosovo, such topics are hushed by not raising the voice, because of stigma or mentality. When it seems that all paths are closed, art is the one that can bring about the change. This has been proven all over the world and in Kosovo too. The consequences of the recent war – thousands of people dead, burnt and destroyed houses, victims of sexual violence, a totally ruined economy – are still visible two decades later. Art has often been used as a way of overcoming or dealing with a reality that happened. One good example of this aspect is the installation from the London-based Kosovo artist, Alketa Xhafa-Mripa. “I think of you” was realized in 2015 in the stadium of Prishtina, and it raised one of the most sensitive topics in the post-war Kosovo society. It gave voice to those who for many years had remained silent: it dealt with the topic of the victims of sexual violence in Kosovo. By collecting dresses from the victims, who for the first time were not judged for a “crime” they did not commit, both the victims and the other people who donated dresses to demonstrate solidarity made the entire world speak about them. In this case, not only Kosovo society opened its eyes to an extremely sensitive matter, but the voice of these women was heard far beyond.

Xhafa-Mripa is only one of many artists who, through an artistic platform, have managed to touch upon such very important topics. The well-known Kosovo singer and architect, Eliza Hoxha, is another example. Recently, she represented Kosovo at the Venice Architecture Biennale with her installation “The City is Everywhere”. Hoxha linked the architectural and artistic aspect in the Kosovo Pavilion, through her presentation that brought a historical retrospective of the country. She was touching upon the ‘90s, when the parallel education system was being developed in the country.

For her, artistic ex

“Often within this context, art opens debates in a very soft and unobtrusive way, and creates a new shelter for the past, for the pain and the many unspoken things that are a result of the social mentality. Often, artists touch on issues about which the society is not ready to speak or act upon,” says Hoxha, who in the last two decades has used her art to raise the issues of persons missing since the last war in Kosovo, and women who were raped during the war.

“Speaking about the last project - the process lasted two years, including research and discussion with stakeholders to understand the core of the issue, and always paying close attention to the sensitivity of the topic. At the time when many associations are working with these women, and have been working with them for many years, nevertheless failing to speak in public, the project broke the silence and opened the door for many other new public events on this issue,” says Hoxha. According to her, at the same time art serves to help with the process of dealing with the past, memorizing the past employing a more creative format. Hoxha says that it is important to reflect upon the past and to re-live it through many individual and collective questions.

Its effects may be varied. “Sometimes to break taboos, sometimes to open debates, sometimes to push a process forward, sometimes to become a voice for the marginalized, sometimes to mobilize and sensitize, sometimes to register and to memorize, and much more,” says Hoxha, who only one month ago, with her exhibition became part of a festival taking place in Belgrade, the main goal of which is to bring two peoples, the Albanians and the Serbs, face-to-face with the past. Although many topics were dealt with in the country as far as the history of the ‘90s in concerned, there is clearly still more to be done in this respect. The fact that Hoxha was stopped at the border while travelling together with the team of the “Mirëdita, dobar dan” festival, and later, the confiscation of some of her photos, is a clear indicator of this situation. A few days ago, almost the same fate was suffered by the art critic and analyst Shkëlzen Maliqi, who was prohibited entrance into Serbia. He was travelling there to promote a monograph containing 20 years of artistic collaboration between Belgrade and Prishtina, focusing on the exhibition of 1997 “Beyond”, which Maliqi opened for the first time in Belgrade with four Kosovo artists.

“Art may be used as a medium, but then it risks becoming a tool for propaganda, to serve ideologies and policies, thus degrading itself even when this is justified with ‘good intentions’,” said Maliqi. According to him, art is not used to deal with the past, but art uses the past, just as it does with other topics, as a “medium” to realize artworks and artefacts.

“What history or morals do to explain the past, art does not have to do, otherwise it is transformed into illustration. Arts seeks the depths, the complex uniqueness of the events of the past or the present, even in dimensions that are not cognitive and learning but are a sublime experience of the entirety of life situations. Aristotle called such experience a catharsis or release of emotions, a shock of understanding / non-understanding of the mystery of life with aspects that may be simultaneously tragic, happy, comic etc...” says Maliqi.

Apart from the artistic ex

“In fact, I would even say that forms of artistic ex

“The theatre becomes that necessary forum, which by asking questions seeks to ‘cleanse’ a society from the past and at the same time, raise its awareness about the future. In other words, by reminding a society of the past, the theatre seeks to improve the society, to make it more human, more tolerant, so that the past is not repeated,” says Neziraj. This only proves that art has the power to make a society aware of its past, so that this past is not repeated. A “problematic” past, in this case, is one which our society often suppresses, hides away from and does have the power to deal with.