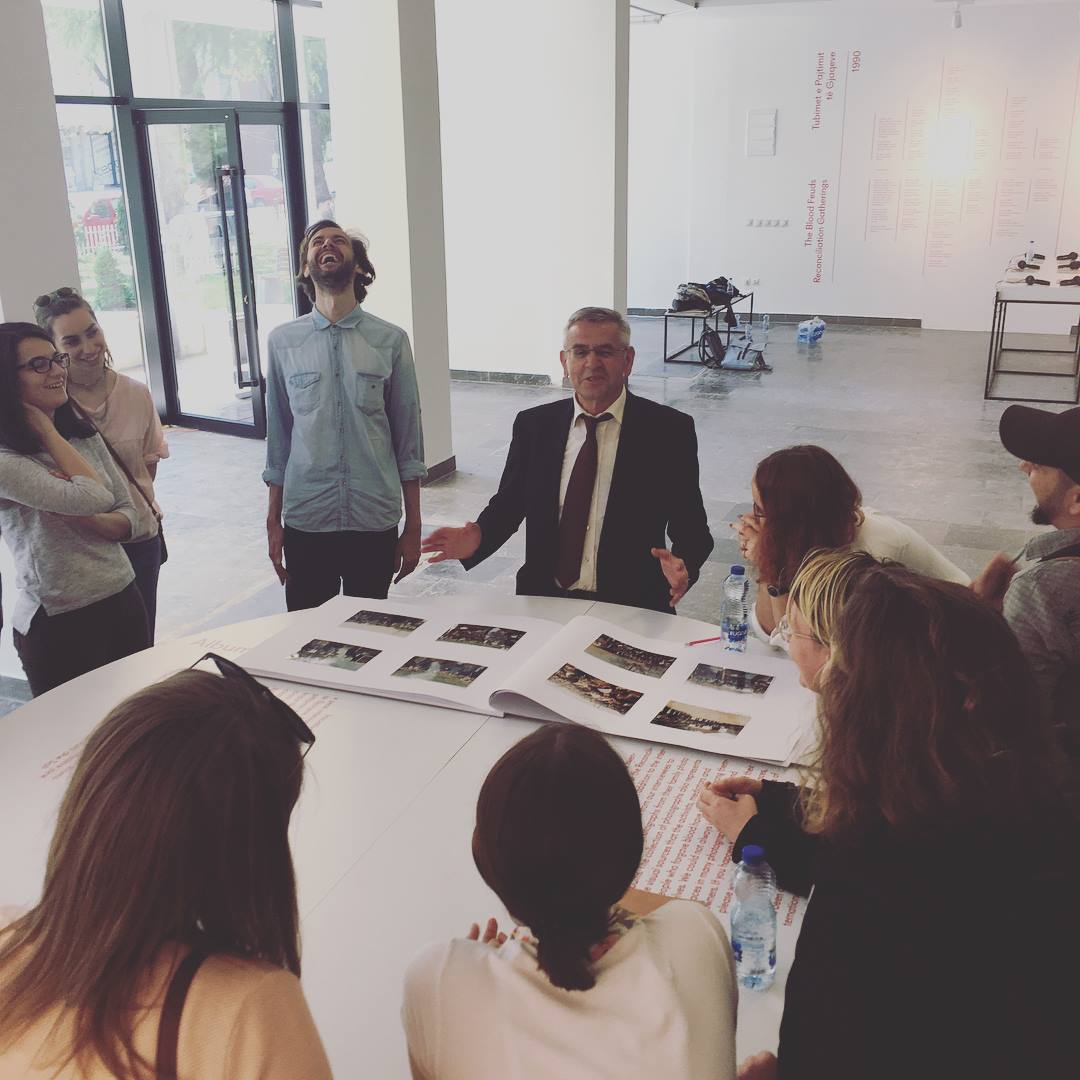 The Reconciliation of Blood Feuds Campaign 1990-1991: Oral History and Memory

The Reconciliation of Blood Feuds Campaign began in 1990 as a call for unity among Albanians of Kosovo. As Milošević gained power, the constitution of 1974 was abolished, rendering Kosovo vulnerable in what was still considered Yugoslav space. The campaign played an emancipatory role, calling for unity and forgiveness, and inviting people to reposition themselves politically. It recognised how the traditional Albanian code of honour was misused to portray Albanians as less civilised people within Yugoslavia.

The aim was for all educated people to approach their communities and encourage families to reconcile their blood feuds, with an emphasis on involving female students in the mediation process. The process of mediation usually took place in the oda (male chambers), where, up to that point, women were excluded. The campaign gave women access to these male-dominated spaces and into this domain of power. In many ways, the campaign delegitimized the authorities who maintained the code of honour and enabled people to rethink their understanding of honour within their communities.

Albanians living in diaspora took with them the code of honour and had never reconciled their blood feuds until a delegation of reconcilers from Kosovo led by Anton Çetta were invited to the United States to reconcile families, namely in New York and Detroit.

The result was thousands of reconciliations, and the liberation of families from the duty defined by the code of honour: to avenge and take out blood. The act of forgiveness ensured a degree of safety in public space within smaller communities in Kosovo, which was lacking at the time due to Milošević’s regime. The campaign’s impact was so widespread that even people in diaspora were looking at it closely and reconciling the feud there.

How Could the Campaign be Used as an Example Today?

The Reconciliation of Blood Feuds Campaign is a remarkable story, from which one can draw many important lessons, including forgiveness, honour, and solidarity. The story embodies values and cultural processes, that themselves pose timeless questions - these may not necessarily demand our attention today, but can be referred to again and again, when one thinks about what constitutes our sense of humanity and what underlying values keep this community together.

The interfaith element is again becoming a serious concern in this region; a concern to be handled carefully. The Reconciliation of Blood Feuds Campaign relied heavily on the 19th century national awakening paradigm, “The Albanian faith is Albanianess” and that is what it tried to represent during the 1990s: unity above all, placing emphasis on the Albanian language as the homogenizing component of the nation. It encourages a solution which is simple yet difficult to achieve, places value on that which brings us together and not on that which tears us apart. This solution is context-specific and for that reason it is successful, but I don’t see how that could translate in other cultural contexts, and that is because most Balkan countries have homogenized their national identities around religion, and not around language, and oftentimes, religion becomes a basis of exclusion in contexts where religion has primacy over culture.

The activists and the members of the families that forgave were at the centre of the exhibition narrative. In the curation stage of the project, it was important to avoid glorification or elevation of certain human figures, also the commemorative dimension which is a common approach to exhibition-making. These curatorial decisions should not be read as disrespect towards the main protagonists of the campaign, but as a way of humanizing the story and opening it up for other stories, subplots and sub-characters. I tried to create more space for overlooked protagonists; women were crucial to the movement, and although they occupy hundreds of photographs of the reconciliation campaign, somehow no one recalls their names and hardly anyone has a story with them in it.

Doing away with the commemorative dimension of the exhibition, was a solution which has to do with the way I understand contemporary history; histories we remember and with which we interact and feed with today’s worldviews. I don’t experience them as static, therefore it is impossible to monumentalize a single narrative and construct the memory and experience from one subject position. The faulty and fluid nature of memory itself was reflected on the exhibition narrative and curatorial solutions I came up with.

It was important to build a memory community. I think we achieved that. Day in and out the exhibition was visited by people who were part of the campaign, but whom as Oral History Initiative, a small team of people, did not have the chance to meet. But the exhibition space became a meeting place, where they could browse the Photobook, a book of photographs gathered from all the people we interviewed. Those encounters brought about other stories and places of reconciliation.

The oral history interviewing methodology is an intersubjective process where the interviewer and speaker enter a process of co-production. Storytelling is a big part of the interviewing process. As an interviewer I am exposed to stories and images, and these personal encounters become a way of producing knowledge about our community. Of course, what you think as a researcher and curator is how to create a narrative environment and enable others to inhabit these spaces. In designing the space of the exhibition which is research-based, the main concern is not to overload the public with too much information, but also have enough information to sustain curiosity and discovery.

Art and the Past

Occasionally, I use curatorial strategies which traditionally are considered common in the art world, but unusual for a history-based exhibition. Here, art lends a hand in transmitting dense information, it says more with less. Also, art strategies allow themselves a degree of uncertainty, because it appreciates the process of production, and at times by veiling difficult questions and conveying them using strategies coming from the art world, suddenly some questions are humanized and aware of their imperfection.  Acknowledging that in an exhibition setting I find it quite important, because it makes the exhibition a performative space where the public just as much can produce knowledge.

Art and Culture as Tools to Engage with the Past?

In this region of ours questions concerning the past are always difficult. Using curatorial strategies to pack content in a way that keeps the questions open for discussion and leaves space for more than one narrative, and to be able to do this, culture and what we draw from it, help us understand our own context in which we are working. Most certainly, informs my sense of responsibility towards the narrative I am trying to curate.

My curatorial approach is quite interdisciplinary, so I fail to see clearly those disciplinary divisions. I let the research guide me when I am curating; I try to address the needs of the content I am working with; the research content dictates the way something will be displayed. However, finding a way to display material that does justice to the research and manages to accentuate the important aspects of the research, of course this dimension which is visual and yet intimately connected to content, is quite important because depending how the content is presented facilitates or not, that relationship between the public and the research itself.

Reactions to the Exhibition

Every museum exhibition tries to have a selfie Photo Op, where the visitors take pictures and posts them online. The exhibition had a central wall, which had a large-scale photograph from the reconciliation gathering in Nabërgjan, a village in the Peja municipality. The photograph showed a huge crowd of people looking in the direction of those reconciling, supposedly, since we don’t see what they are looking at, but we read the situation by looking at people’s faces. I chose that photograph, because it represented the togetherness of that moment and desire to be part of it. The visitors, most of them from Peja, recognized people in the photograph, which was an interactive dimension of the photograph I did not calculate or foresee. Most of the time the central wall was used as a backdrop, the visitors liked to insert themselves in the photograph of the reconciliation gathering.