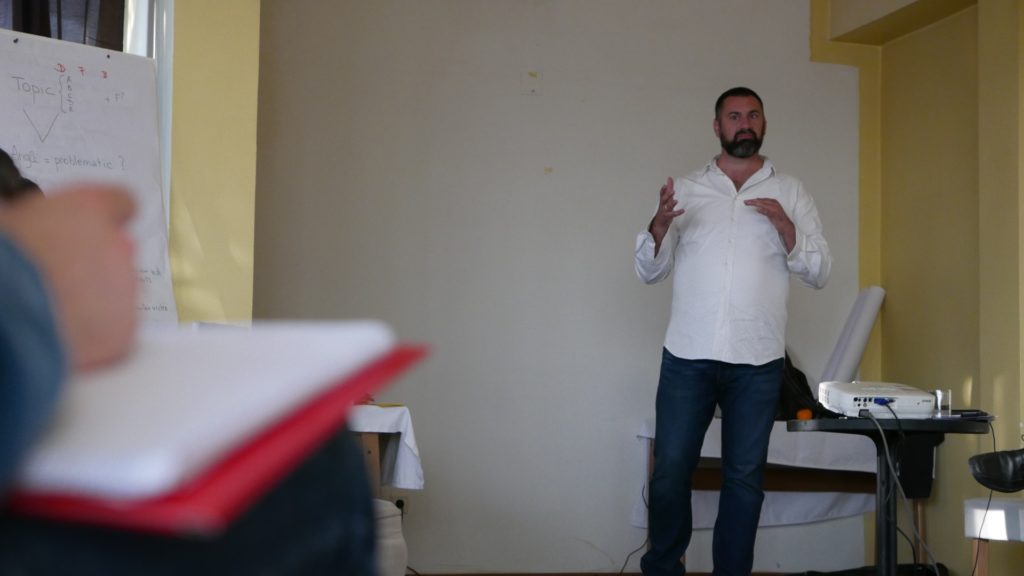 Peace must be around you and in you

On Saturday, November 10, we had the opportunity to host Kemal Šalaka, a peace activist and a former under-aged soldier of the Army of Republic of Bosnia and Herzegovina during the war of the 90s. In a very open discussion, Kemal talked about his motives to become a soldier during the war, to demobilize and to start a project called “Children of war to children of peace“. Through this project he gathered young soldiers from all three sides of the previous conflict, people willing to share their stories and advocate for peace as a universal value.

In the interview, he talks about his views on peace and peace-building and sends a universal message to the youth of Bosnia and Herzegovina.

Kemal Salaka: “Peace-building is only possible when there is no killing and no weapons.”

Kemal, thank you for being here with us today. We would like to hear your story during the war. Why did you join the army?

I am happy to be here! So when the war started in Sarajevo, my sister and I wanted to leave the city, but my best friend told me: “If we all leave who is going to defend our hometown?“. As a 16-year-old guy, I was easily convinced and that is how my war story started. It took only a couple of months until I saw all the atrocities that a war can bring. When my best friend died at the end of 1992, and we were still fighting in 1994, I realized we were fighting for nothing. That was when I decided to leave the army.

From 1995 to 1997, I worked at the UNPROFOR (United Nations Protection Force). But it was a very difficult time for me. During the war you don’t realize what you are doing, you are functioning like a robot. But years later you understand what you have done and then many people start to flee in alcohol and drugs because they can’t live with the experienced events, with the reality.

How came the idea of the project “Children of war to children of peace”?

There are no programs here for ex-soldiers to process what happened. I wanted to gather former children soldiers from all involved groups in the war: Bosniaks, Croats and Serbs with the same traumas, injuries and insecurities. In order to prevent further generations from experiencing the same things as we did, we decided to organize school workshops and summer camps, where we talk about war and peace.

What does peace mean to you?

A normal environment for living. Peace must be around you and in you in order to make everything normal. Peace for me is a natural ambient in which human beings can exist and develop in a normal way.

What can we do in order to achieve and maintain peace as a single person?

Fight against war, insecurity and lies. Raise your voice when you see a lie. It is important to be educated. Educate yourself to react when you see something which can lead to violence and war. Then you should prevent. You can do it physically, verbally or by disagreeing with your heart. Those are the three ways how to react to any kind of injustice around you.

How important is it to speak about previous conflicts in order to build peace?

It is important to not only look at the conflict itself, but at the given lessons from previous conflicts. We need to look at the causes. If you don’t resolve them, they will be transferred to the future generations and that is the main problem. On the Balkans we had conflicts in the 90s, but they already started few centuries ago during Ottoman time. All those conflicts were not solved properly and were transferred to the following generations. We fought because of the problems of our grandfathers.

Do you consider that Bosnia and Herzegovina is still in the process of peace building?

People can always improve themselves, but the question is who will maintain that progress and who will be in charge to make that progress possible? Who is the head of this? There will always be people who have tools to stop you, to force you, to give you the salary and to make you happy.

Do you have any role model that you look up to in order to stabilize peace? People or concepts?

Who inspires me? My kids inspire me, because I want them to live in peace. Not only my kids but I want all kids to have a normal life and to live in an environment which is normal. First of all it needs to be peaceful and secure because security is the main human need. There is a saying in Bosnia, it says “A wonderful hotel is useless, when it is in an insecure place”. Security is very important.

What is your message to this group and to other young students in Bosnia and Herzegovina?

Think with your head. Don’t be used by someone else. Just inform yourself well before every action. Don’t let passion overcome your mind because some people could play with that passion and with your emotions. The head must be clear and cool – always.

Sometimes people don’t look on the other side because people are selfish. Try to put yourself into other shoes and think how the other side would interpret your action. Then you will help yourself to make the right decision.

Here you can see more documentation about Kemals work

Watch this video to see what peace means to the participants of the “Youth seminar in Sarajevo”: