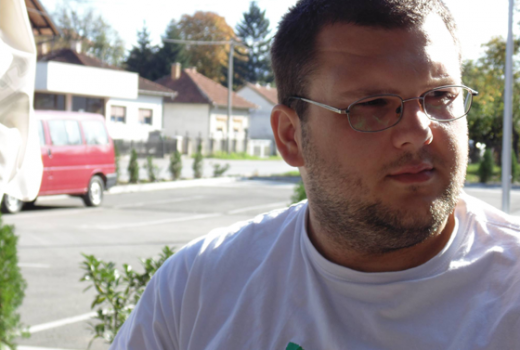 Branko Ćulibrk: It is important to initiate a discussion on "difficult" issues and not be afraid of threats

The Center for Youth Kvart from Prijedor was officially established in 2010, whereas unofficially it had existed as a youth program of the organization ''Zdravo da ste'' since 2006. It is, as members of Kvart say themselves, a peace building, human rights, non-party, non-governmental and non-for-profit association of citizens based on uncompromising respect for universal human values such as peace, non-violence, democracy, freedom, equality, respect for human rights and justice. Although members of Kvart have been analyzing their activities through a great series of social phenomena, their activities are primarily focused on young people, their needs and problems.

Branko Ćulibrk, a long-term activist and project manager of Kvart, explains that activities implemented by this organization belong to three categories. ''Our strategic goals are based on three directions. The first, for which Kvart is best known, is the part related to facing the past and culture of remembrance and in this case we mostly deal with issues regarding Prijedor. The other direction is discrimination, hate speech and crimes committed out of hatred, where we are mostly oriented towards minority groups, and particular focus is placed on the LGBT population. The third strategic direction is the field of culture or organization of activities for youth through a more alternative approach to culture and promotion of the unknown cultural scene.''

''Traitors of their people''

Initiating a discussion on ''difficult'' topics is particularly challenging in small towns such as Prijedor. Due to the fact that they deal with problems regarding the past and war happenings in this part of Bosnia and Herzegovina, activists of Kvart were frequently subject to threats and intimidation. Ćulibrk emphasizes that it is difficult to be branded as ''Serbian'' organization that deals with ''Bosniak and Croatian issues''. ''Kvart has ''bitten'' into quite difficult topics in Prijedor. The Association of War Detainees, Association of Women from Prijedor, Izvor, etc. are associations that are labeled as Bosniak associations. Kvart has been recognized by the local community as a Serbian association that deals with facing the past and topics related to killed civilian population in Prijedor. When we speak about that civilian population that was killed, those were mostly Bosniak and Croatian civilians. In a certain sense, we, i.e. Kvart as an organization and we as individuals, have been branded as traitors, as non-Serbs, traitors of the Serbian people, etc. On the other hand, none of us is in general declaring their ethnicity, and we mostly use that ethnic identity for political purposes, we truly use it to manipulate, in order to reach out, to be seen as serious and relevant in our actions.'' Kvart is particularly active as part of the initiative ''Jer me se tiče'' (Because it concerns me) that is related to issues regarding facing the past in Prijedor, and the best known activity is marking of the International Day of White Ribbons, May 31.

''One of the organizers of the Day of White Ribbons is also the executive director of Kvart, Goran Zorić, and we were automatically identified as someone who does the most regarding this issue, and that was basically the point, when the first problems related to our activities and criticism started. Sometimes, there were even serious threats and attempts at physical assault, but over the past period this has changed. I guess that it is also the moment of accepting the fact that we are here and initiating a discussion on certain issues. Over the last six months we have not been too exposed to criticism of the public. And I do not know whether the reason is the fact that they really got used to us or maybe the fact that we are no longer working with the same intensity as before'', says Ćulibrk.

One of the most important factors for successful work and achieving results at an NGO is continuous learning, attending different workshops, seminars or conferences. Ćulibrk believes that it is very important that organizations do not base themselves on the idea ''that they know it all'', but to be rather active when it comes to acquiring new knowledge. ''We all have attended different trainings and were willing to learn, acquire knowledge and skills, everything we needed for our previous work. I see this as an advantage for our current activities, just as we can transfer the knowledge and skills we acquired to some younger people that are starting to participate. Most organizations are starting from the attitude that they know it all, and they are not willing to invest certain time for building some new capacities. We honestly have a continuous need for such capacity building and we are always attending various trainings, seminars, workshops, conferences and we recognize the importance of it all.''

Another topic that members of Kvart would like to focus on more over the coming period is regarding the rights of the LGBT population. Although the organization has not organized any specific activities in this field so far, there is a wish for Kvart to strategically focus on issues of the LGBT community. ''Given the fact that members of Kvart also include members of LGBT population, it was natural to start dealing with these issues, too. We do not organize direct activities regarding this population, but everything started from the moment when the mayor of Prijedor proclaimed the public gathering for the purpose of marking of May 31 in 2013 to be a gay parade. Ever since then we have also been considering the manner in which we might become more seriously involved in LGBT issues. It is planned that over the coming period Kvart will focus more on this. So far, the activities mostly involved cooperation with organizations from the region, such as the Sarajevo Open Center, Okvir and the association Kvir Aktivista from Banja Luka.''

Parents prohibit their children to go to Kvart

''Currently the core team of Kvart consists of the four of us, those are people that are part of the organization and they mostly perform the activities on a daily basis. The inner team of Kvart consists of a dozen of persons that are coming to the organization on a weekly basis and participate in certain activities, but the widest circle consists of maybe thirty persons, in case of whom we can rely that they will participate and be active in various activities. People join Kvart mostly spontaneously, especially since we deal with certain things that are not part of the trend. We have had many situations where parents prohibited some of our members to come to Kvart, specifically due to this exposure and problems they might have if they are recognized as members of the association. We have managed to overcome such problems in different ways. Now there is mostly this myth that if you are part of Kvart, you will never get a job. Since this is a small town, we mostly know everyone and have understood that this is not really the case and that it is not that terrible to be an activist and initiate a discussion on such issues. It is much more important to start discussing certain issues of importance than be afraid that you will not get a job that is anyway hard to get, unless you are a member of a political party.''