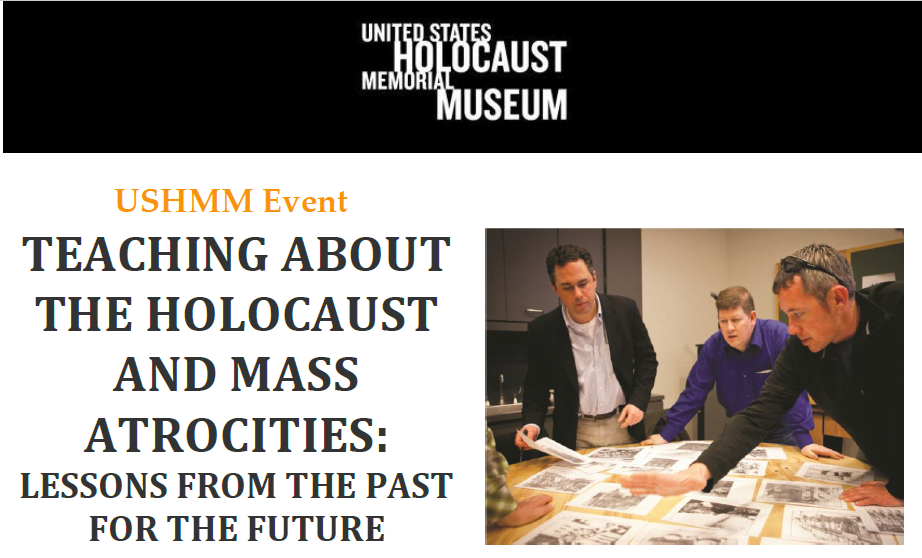 USHMM Event TEACHING ABOUT THE HOLOCAUST AND MASS ATROCITIES: LESSONS FROM THE PAST FOR THE FUTURE

Bosnia and Herzegovina is well-known for being politically fragmented where the daily nourished politicization of the past creates divisions along ethnic lines which are strongly present even in our school systems. The memory landscape is no different and remains fragmented due to highly disputed patterns of remembrance involving and even discriminating against representatives of the three constituent peoples and the so-called “others”. We often hear Santayana’s words that “Those who cannot remember the past are condemned to repeat it” and yet we have witnessed genocide and mass atrocities over the course of two decades more than we thought we ever would, some of which are still ongoing in some parts of the world. Although Bosnia and Herzegovina is still struggling with fragmented memory, we believe that an opportunity to remember the Holocaust will both honor the many lives lost or affected by its aftermath, and raise consciousness about citizen activism and the role of individuals committed to mass violence prevention and the promotion of peace. Bosnia and Herzegovina, with Sarajevo as its capital, lacks in united peace building initiatives for Holocaust education and inclusive culture of remembrance. This event will thus focus on the culture of remembrance, and direct lessons that we should use in our everyday lives and fields of work. Additionally, a two-day event of remembrance with different activities targeting a large number of direct or indirect participants carries a strong message towards the recognition of the sufferings, processes of reconciliation, and sustainable peace.

As a humanitarian aid worker, Carl Wilkens moved his young family to Rwanda in thespring  of 1990. When the genocide was launched in April 1994, Carl refused to leave, even when urged to do so by close friends, his church and the United States government. Thousands of expatriates evacuated and the United Nations pulled out most of its troops.
Carl was the only American to remain in the country. Venturing out each day into s treetscrackling with mortars and gunfire, he worked his way through roadblocks of angry, bloodstained soldiers and civilians armed with machetes and assault rifles in order to bring food, water and medicine to groups of orphans trapped around the city. His actions saved
the lives of hundreds.

The unspeakable atrocities of the Holocaust, in their inhumanity, constantly warn us to deeply examine basic moral issues of humanity. A structured inquiry yields critical lessons for an investigation into human behavior. The USHMM’s mandate is to support teachers in this endeavor, providing materials and guidance as well as help in finding additional
resources. The workshop is free of charge and the working language is English.