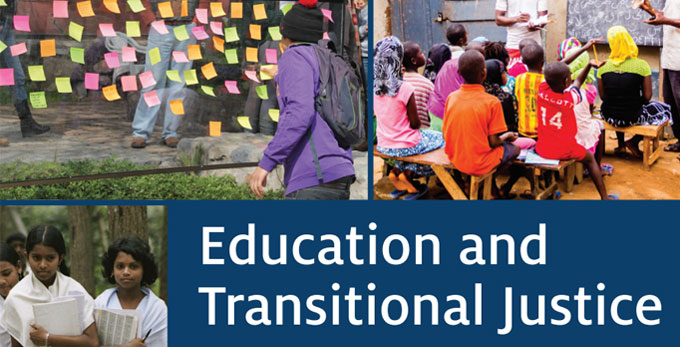 Education and Transitional Justice: Opportunities and Challenges for Peacebuilding [report]

To gain a stronger understanding of how education can help countries dealing with legacies of conflict and mass atrocities, ICTJ partnered with UNICEF on an ambitious research project examining the connections between education and transitional justice in peacebuilding contexts.

After over two and a half years of work examining experiences in nine countries and covering a myriad of themes, ICTJ and UNICEF launch “Education and Transitional Justice: Opportunities and Challenges for Peacebuilding,” a report that highlights the main findings of the extensive research and provides policymakers and practitioners with practical guidance for linking education to the development of transitional justice measures.

One major finding of the project highlighted by Ramírez-Barat is that educational systems are more entangled in conflict than is often thought. “There is not only the idea that education can help to portray a new message of change,” said Ramírez-Barat. “In itself education is an institution or a part of the social construct that needs to be changed.”

For example, during the armed conflict in Peru in the 1980s the Shining Path insurgent group often recruited children from schools in marginalized rural areas. In cases like this, there is a need for deep reforms, including to school culture, curriculum, and teachers.

“The study forces us to look at education from a different angle and to appreciate how education can be misused and how it can play a constructive role,” said Affolter.

Drawing from UNICEF’s position as a provider of education in crisis countries, Affolter notes that education can sometimes be used to address grievances. He points to the project’s study of Chile, where scholarships were given to torture victims and their descendants as a means of redress.

But while education can contribute much to transitional justice, the report reveals that there are challenges to overcome. Duthie cites implementation as a chief obstacle.

“Very often, truth commissions make recommendations about change in the education sector, but these go only partially implemented or ignored completely,” said Duthie.

Duthie says that the constraints on implementation often fall into two categories. In post-conflict countries, capacity and resources for reform are often insufficient. In Sierra Leone, for example, the connecting education reform to the transitional justice process was hampered because the country’s education infrastructure was deeply damaged by war.

Political constraints also affect the implementation of education-based measures. National and local governments may be uninterested, or schools themselves may be reluctant to deal with divisive issues in the classroom.

“The communities and the parents of students may also oppose measures,” said Duthie, pointing to Bosnia and Northern Ireland as examples of countries where divisions within society make education reform difficult.

While the research project uncovered serious challenges in responding to the past through education, Duthie stresses that limited change can still be important. “You can still help victims try to overcome real obstacles to accessing education even with all the challenges,” he added.

Affolter cautions that practitioners should be realistic about what education can and cannot accomplish.

“We have to ask ourselves how we are presenting topics, how we are discussing histories, in a way that there’s an impact,” said Affolter. “Because just presenting something in a classroom setting may not have the consequences and the impact that we hope to achieve.”

In the long term, Ramírez-Barat says, their research has revealed many challenges, but also many opportunities for adopting transitional justice frameworks when thinking about education reform. But this project is just an initial foray into an under-researched field. There is much work left to be done to strengthen the role of education in transitional justice and to build societies that can better prevent recurrence of violence.

A book on the subject will be published in Spring 2016. For more on the project, visit the project webpage.