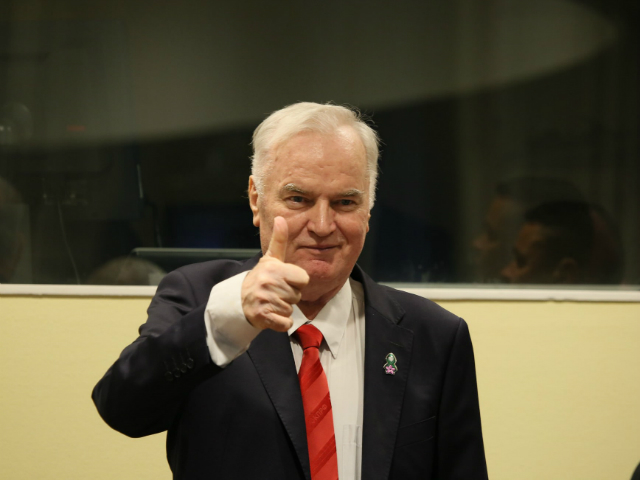 After almost a quarter of a century, the International Criminal Tribunal for the Former Yugoslavia closed down in December, after convicting 90 people, most of them for wartime crimes in Bosnia and Herzegovina.

But its closing did not pass off without controversy, as it handed down two of its most important judgments just weeks before shutting its doors.

In November, the ICTY sentenced former Bosnian Serb Army chief Ratko Mladic to life in prison for the genocide of Bosniaks from Srebrenica in 1995, the persecution of Bosniaks and Croats across the country, terrorising the population of Sarajevo citizens and taking UN peacekeepers hostage.

The UN court however acquitted Mladic of committing genocide in six other Bosnian municipalities in 1992; the verdict can be appealed.

Mladic’s verdict again highlighted the continuing post-war divisions in the country, as Bosniak survivors of the conflict generally welcomed his life sentence, but Bosnian Serbs accused the Tribunal of anti-Serb bias.

Representatives of war victims’ associations who attended the verdict in The Hague cheered when Mladic was sentenced to life imprisonment; some of them also shed tears.

“It shows that you cannot commit crimes with impunity,” said one of them, Fikret Grabovica from the Association of Parents of Children Killed in Wartime.

But the reaction in Bosnia’s Serb-dominated entity of Republika Srpska was strongly negative.

The Serb mayor of Srebrenica, Mladen Grujicic, said that the verdict confirmed that the Hague Tribunal was set up to persecute Serbs.

“Mladic will be remembered in history and this sentence only strengthens his myth among the Serb nation, which is grateful to him for saving it from persecution and extermination,” Grujicic told media.

A week after the Mladic verdict came an even greater controversy when the ICTY handed down its final verdict in the case against six Bosnian Croat wartime military and political leaders, who were found guilty of a campaign of persecution against Bosniaks in 1993 and 1994 and sentenced to a total of 111 years in prison.

After hearing his sentence, one of the defendants, Slobodan Praljak, swallowed a vial of poison and died soon afterwards, causing shock and anger among many Croats inside and outside Bosnia and Herzegovina.

Dragan Covic, the chairman of the Bosnian state presidency and president of the Croatian Democratic Union, HDZ party in the country, insisted that Praljak and the others were not guilty.

“Slobodan Praljak made a sacrifice to prove he is innocent,” Covic said.

But Bakir Izetbegovic, the Bosniak member of the presidency, called the verdict “just”.

“The Tribunal put an end to a dark part of history,” Izetbegovic said.

Some observers meanwhile accused Praljak of ‘hijacking justice’ by committing suicide and overshadowing the crimes of which he and the others were convicted.

At the Bosnian state court in Sarajevo, the most high-profile verdict was the judgment that acquitted wartime military commander Naser Oric, who became a hero among Bosniaks for his defence of Srebrenica in the years before the 1995 massacres.

Oric and former Bosnian Army soldier Sabahudin Muhic were cleared of the murder of three Serb prisoners of war in villages near Srebrenica because the prosecution failed to prove beyond reasonable doubt that they were guilty.

“Justice has won,” Oric shouted as he left the court in Sarajevo, where he was greeted by members of the Mothers of Srebrenica war victims’ group.

But Republika Srpska’s President Milorad Dodik accused the court of being biased against Serbs because the judge at the trial was a Bosniak (Bosnian Muslim).

“It’s enough for a Muslim to judge a Muslim and you will be acquitted,” Dodik said.

Dodik called on all Serbs to quit their positions in state-level judicial institutions, although none of them responded to his call. He also threatened to revive the idea of a referendum to question the legitimacy of the state-level court and prosecution.

The Oric verdict also triggered turbulence in the state judiciary itself. Republika Srpska’s Centre for the Research of War Crimes gaved the High Judicial and Prosecutorial Council, Bosnia’s judicial overseer, with a list of 15 judges and prosecutors, who it claimed were working against the interests of the Serb people.

The Council responded by deciding that it would now be possible to release judges and prosecutors from their duties without conducting disciplinary procedures, which in turn triggered criticism from international officials in the country.

As a result of the pressure, the Council went back on its decision.

At the beginning of the year, Ranko Debevec was appointed the president of the Bosnian state court – a decision that was controversial because of his relatively modest prior experience.

Debevec had to defend the court when it came under fire for alleged anti-Serb bias after the Oric verdict.

“The court of Bosnia and Herzegovina works professionally in accordance with evidence provided by the prosecution and not on the grounds of political and media speculation and pressures,” Debevec said.

The state court said in October that since it was set up, it has acquitted 60 Serbs of war crimes or genocide - an attempt to counter the allegations of bias.

In an interview with BIRN, Debevec expressed regret that what he called the “real image of the court” and the important work it does was often overshadowed by criticism.

Some of this criticism is linked to what has been described as the slow pace in tackling the Bosnian judiciary’s enormous backlog of war crimes cases.

The State Strategy for Processing War Crimes, which was adopted by Bosnia’s Council of Ministers in December 2008, decreed that the more complex cases should be completed within seven years and the others within 15 years.

Those deadlines have been missed, and Debevec said that it was difficult to predict when all the war crimes cases will finally be completed.

“The prosecution has received several thousand criminal reports for war crimes. That is a great task, because war crimes are not simple crimes,” he explained.

“I think there is a long road ahead of us,” he admitted.

In 2017, 18 people were convicted of wartime crimes in second-instance verdicts. The longest sentences, 20 years in prison each, were given to former Bosnian Serb special policemen Dusko Jevic and Mendeljev Djuric for assisting in the commission of genocide in Srebrenica.

In addition to the sentences given to Jevic and Djuric, a total of 162 years of prison time was handed down under second-instance verdicts by the state court.

Because the deadlines for completing cases set by 2008’s State Strategy for Processing War Crimes have not been met, Bosnia’s Council of Ministers set a working group to revise the strategy.

However, despite several months of negotiations, it has yet to come to any agreement on how to tackle the problem.