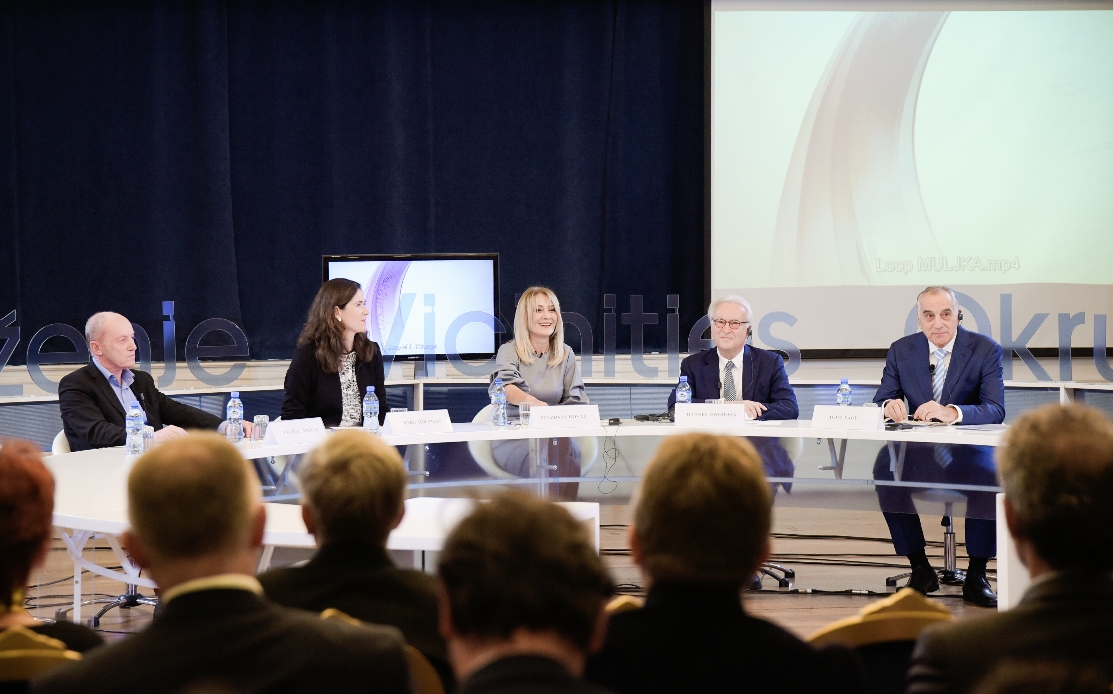 PROMOTION IN TIRANA: "OKRUZENJE IS PERFECTLY PLACED TO LINK REGIONAL INITIATIVES WITH THE PEOPLE LIVING IN THE WESTERN BALKANS”

On 15 December 2017 ‘Okruzenje’, Balkans’ unique democratic media initiative, celebrated its 6 years of broadcast across the region in a momentous promotional event and episode filming in Tirana. The event, organized for the first time ever in Tirana, gathered numerous visitors, including members of the diplomatic corps, media representatives, longtime friends of the series, former Albanian guests of the show, and media & communication students from Albanian universities.

Participating in the promotional event were Mr Hannes Swoboda (Chairman of the CDRSEE), Ms Anke Holstein (Deputy Head of Mission of the Embassy of the Federal Republic of Germany in Albania), Mr Agim Fagu (former diplomat), and MrEngjëll Ndocaj (Deputy Director General of RTSH) who shared their views on the importance of the initiative for the region.

Quoting former French President François Mitterrand, Hannes Swoboda said that “nationalism means war” but reconciliation with a country’s own past and with its neighbours is the remedy for war. “As Vicinities has been the only TV programme that has been fostering reconciliation through cooperation in the media sector, it is a permanent commitment to keep the show alive for a long time” he added. Taking the floor, Ms Anke Holstein said she was “delighted by the idea of putting together the countries of the region at one table trying to overcome disputes, starting to build more of a common than a divided region”.

Agim Fagu emphasized that in light of worsening media standards and lack of ethical journalism initiatives such as ‘Okruzenje’ encourage the acceleration of the democratic process in the region. For Engjëll Ndocaj ‘Okruzenje’ is a way of communication for people living in democratic societies, therefore, he called for the initiative to continue for as long as possible. He also mentioned that the fascinating topics and the great achievements of the show, convinced Albanian broadcasters to embrace the series.

The four media experts engaged in a lively dialogue on contemporary media topics such as the phenomenon of fake news, the influence of the internet on traditional media, issues of regulation of journalism in the Western Balkans and many more. Guests received questions from the audience and from facebook users who were making comments live on the facebook pages of ‘Okruzenje’ and the CDRSEE.

This unique media event became reality thanks to the collaboration of production teams and crews from Albania and Serbia that achieved reconciliation beyond simple rhetoric. Albanian media demonstrated a great interest in covering the event and got exclusive interviews from the distinguished guests. The event was hosted by Tirana International Hotel and organized with the kind support of the European Fund for the Balkans and the German Ministry of Foreign Affairs.