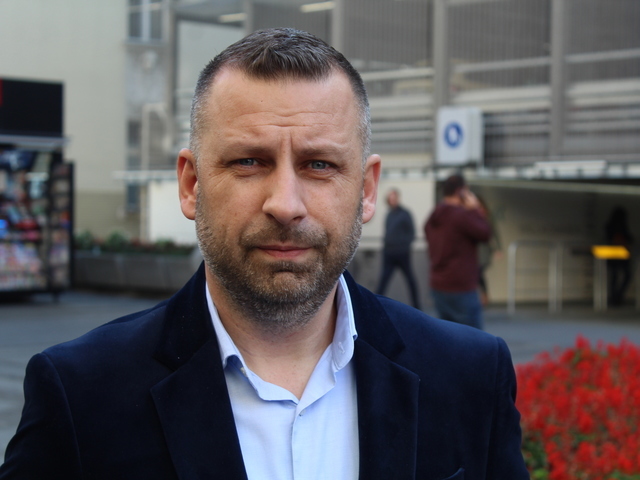 Kosovo government minister Dalibor Jevtic says Serbs and Albanians need to build trust - and that Kosovo Serb children should learn the Albanian language to ensure better communication for the future.

“The key word today in Kosovo is trust, which has to be built both between the two communities and towards [state] institutions,” Dalibor Jevtic, the Minister for Communities and Returns in the Kosovo government, told BIRN in an interview.

“Knowledge of Albanian is a necessity for the Serb community. Most of the middle-aged and older generation of Albanians know Serbian, which is not the case with the Serb population, and this has to change too,” said Jevtic.

A member of the presidency of the Kosovo Serb political party Srpska Lista (Serbian List), which is supported by Belgrade, Jevtic has served as a minister in three Kosovo governments, said that both his professional and personal experience has taught him to always put the lives of ordinary people before politics.

“This policy of life before politics hasproved itself to be very fruitful, as over the past several years we haven’t seen any incidents with a lethal outcome between the Albanian and Serb communities,” he said.

“And if we push some more in this direction, overcome stereotypes, and let go of the past in order to make the future better, life will triumph in Kosovo.”

‘Serbs were right to back Haradinaj’

Jevtic thinks that Srpska Lista’s decision to support the government led by Ramush Haradinaj - Kosovo’s new prime minister, a former Kosovo Liberation Army commander who was acquitted of war crimes by the Hague Tribunal in 2007 - has already shown itself to have been a good choice.

“We are now even making some progress on very difficult issues which were previously at a standstill for a long time,” Jevtic argued.

“If we talk about life for Serbs in Kosovo, it is not the same in the south and in the north of Kosovo. This is the fact that has to be considered by any policy. I found that the prime minister is determined to tackle the issues like the one we have in Djakovica, which is still a forbidden town for Serbs. He told me that he we will go there together and solve these problems.”

Djakovica - called Gjakova in Albanian - is a town in south-west Kosovo that saw large-scale destruction during the 1998-99 conflict and suffered numerous civilian causalities, predominantly among Albanians.

In 2015, an attempt to organise a visit for displaced Serbs to their former homes in Djakovica/Gjakova was met by protests, and the stoning of their buses.

This caused the resignation of Jevtic’s predecessor, Aleksandar Jablanovic, after he called the incident barbaric and was then dismissed from the government under rising public pressure.

Jevtic said that the popular understanding that Serbs are to blame for everything, which is still prevalent in some parts of Kosovo, has to be dealt with, but stressed that this was not an easy task.

“Prime Minister Haradinaj doesn’t have to prove his patriotism to anyone, unlike his predecessor Isa Mustafa, and this is why I am confident he can do it,” he said.

‘The question of language is vital’

Trust has to be built between two communities because simply providing money to rebuild the houses of the Serbs who fled after the 1999 war is not enough to ensure that their return is sustainable, Jevtic said.

“I think that the question of language is vital for the building of trust. I believe it would be excellent if Serbian children would learn both English and Albanian as foreign languages, and vice versa,” he explained.

“This was once quite normal in Yugoslavia. Today, young Serbs and Albanians communicate only in English. I myself understand Albanian well, but I use it sparingly, as I like to express myself very precisely, so I communicate with Prime Minister Haradinaj in Serbian,” he added.

Serbia can and should contribute, Jevtic argued, citing as an example an Albanian language-teaching project that was implemented in the southern Serbian towns of Presevo, Bujanovac and Medvedja in 2012.

“Knowledge of Albanian is a necessity for the Serb community in Kosovo. Most of the middle-aged and older generation of Albanians know Serbian, which is not the case [for the Albanian language] among the Serb population, and this has to change too,” he said.

“When you speak to someone in his language, communication is always much comprehensive, and brings better results.”

‘We are using our heads’

After the 1999 conflict, some 240,000 Serbs fled Kosovo, and so far only about 10 per cent of them have returned, according to the Ministry for Communities and Returns.

In 2017, 343 people have returned so far - a drop of almost half from 2016, the ministry says, mainly due to the fact that two elections have been held in Kosovo this year, deflecting the attention of the Pristina administration from the issue.

Jevtic stressed that people need social and economic security to rebuild their lives, noting that in previous years, some Serbs have beenurged to return to communities in which they do not feel safe.

“So we have adjusted the policies to that fact, and if someone once lived in Urosevac or Pristina, but today wants to live in Strpce, or Gracanica, we do not question that intention, but help him to make this happen,” he explained.

Jevtic pointed out that returns to urban communities are currently more or less nonexistent, and wants this trend to be reversed too – although he admits there are genuine obstacles.

“When the mayor of Pristina tells me that Serbs are welcome back but in the same time treats the cathedral of Christ the Saviour in Kosovo’s capital the way they do, it makes me think that this invitation is not sincere,” he said.

“They call it the heritage of Slobodan Milosevic, but so is the City Hall building in Pristina, so do we demolish that too?”

The building of the Church of Christ the Saviour started under Milosevic’s rule in 1995, near the University of Pristina, but construction was interrupted by the war so it remains unfinished.

The Serbian Orthodox Church has staged protests after the building was vandalised, while local Kosovo Albanians have demonstrated for its removal, arguing that it is a monument to Milosevic’s oppressive regime.

Jevtic argued that the return of people displaced by the conflict to urban areas will also be dependent on them being able to get education for their children in their mother tongue - although this issue will take longer to resolve than the provision of homes for returnees.

“If I said we will have significant returns to the cities in the short term, it would be irresponsible, even though I would like this to happen tomorrow,” he said.

“But we are not talking about what is in our hearts - we are using our heads.”