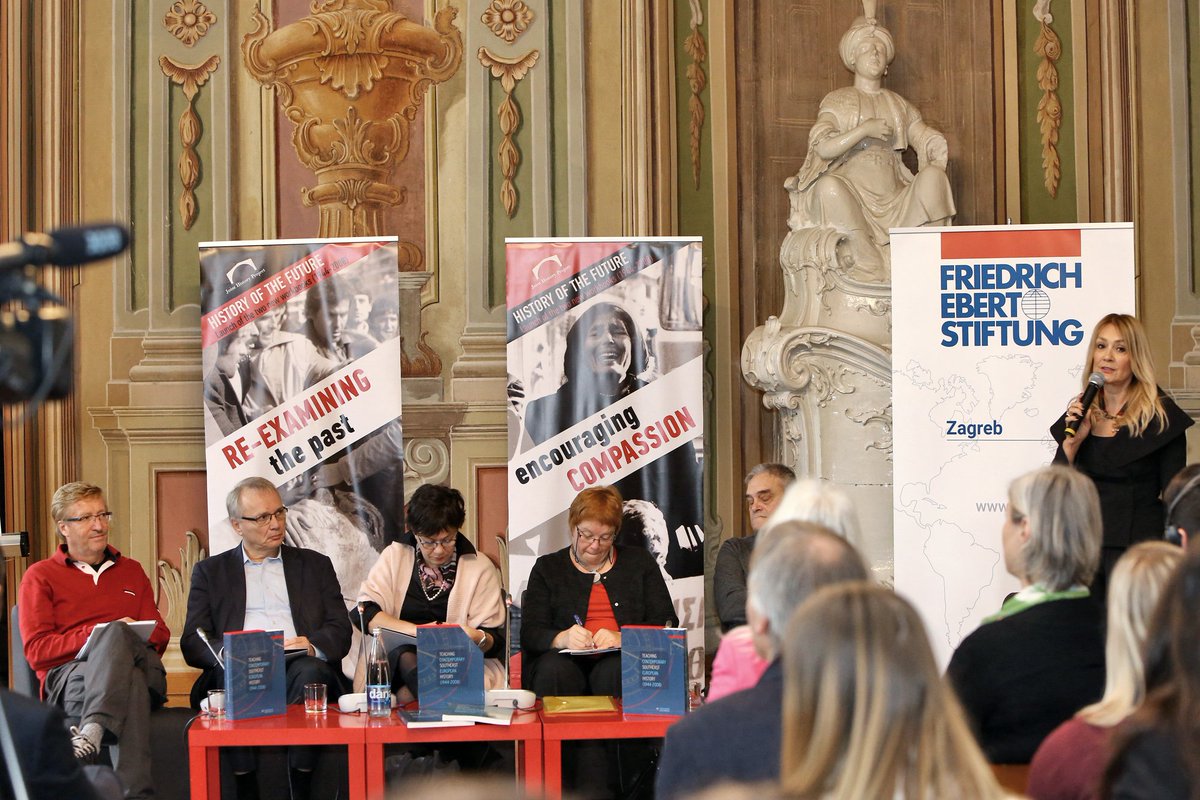 The JHP II’s series of regional launches was concluded in Ljubljana on November 22. The final ‘History of the Future’ event, held at the Museum of Contemporary History, was met with an overwhelmingly successful reception. With a diverse audience consisting of members of the diplomatic corps, international organisations, CSOs, NGOs, journalists, history teachers and students, the two new JHP volumes were presented to a Slovenian audience for the first time in the project’s history.

Mr. Max Brändle, Director of the Regional Office of the Friedrich-Ebert-Stiftung in Slovenia and Croatia commented in his opening speech on the importance of cooperative history teaching work as a major project of reconciliation and how this is essential for the democratic progress of the region in the present and the future.

This theme was continued by the expert speakers: “The Joint History Project workbooks are an example of how contemporary history should be taught in our region” said Prof. Peter Vodopivec, Historian from the Slovenian Institute of Contemporary History, during his evaluation of the two new workbooks.

The presentation continued with a roundtable of experts opened by Professor Božo Repe, member of the JHP History Education Committee and central contributor to the workbooks and the project. In an emotional speech, Professor Repe recounted how this bold initiative had started, by referring to the numerous experts who made a contribution throughout the years, the challenges they faced that brought them closer and how a mission that many considered impossible was accomplished. The roundtable panel, moderated by our ED Ms. Zvezdana Kovac, consisted of Professor Dubravka Stojanović, Vice Chair of the History Education Committee, and other Historians. Professor Neven Budak, also co-editor of Volume I of the workbooks Professor Alexei Kalionski, also co-editor of Volume II of the workbooks and Professor Snježana Koren, Pedagogical Consultant of both volumes completed the panel which was followed by questions and answers from the audience.

Panelists engaged in an insightful discussion on the history of the project and its distinguishing features, that render it an example of peace education and reconciliation through history teaching. Professor Stojanović talked in detail about the reasons that prompted the creation of the two new volumes. She, further, spoke about the collective endeavour behind the production of this alternative educational material, as well as the extended research and review of sources that preceded the selection of materials for inclusion in the books. Professor Budak answered questions with regard to the multi-perspective approach as a central characteristic of the JHP workbooks. He emphasised that the books display a broad and multilateral vision of history that opens discussion and gives room for differences in the interpretation of what has occurred.

Professor Kalionski discussed the reasons and the complexity of the process of selecting contemporary issues to be addressed by the new books. He, further, explained to the audience why the experts chose to set the beginning of the chronological scope of the project at the period of the Ottoman Empire and not the Medieval Period. Professor Koren, focused on the methodological approach introduced in the books, one that promotes critical thinking and helps students develop critical and analytical skills by being able to select and assess the information they receive. All of the contributors reiterated the books’ potential in making a difference for history education and highlighted the need for the subsequent translation of the books into more of the languages of the region.

The event drew a wide array of media attention, with various local media outlets covering the presentation and interviewing the guests. The JHP books were warmly welcomed by Slovenian teachers and students, who showed great interest in the evolution of the project, the critical thinking and multi-perspective methodologies integrated in the educational materials. The attendees further expressed their support in the translation of the books into Slovenian.

The event was organized with the support of the Friedrich-Ebert-Stiftung.