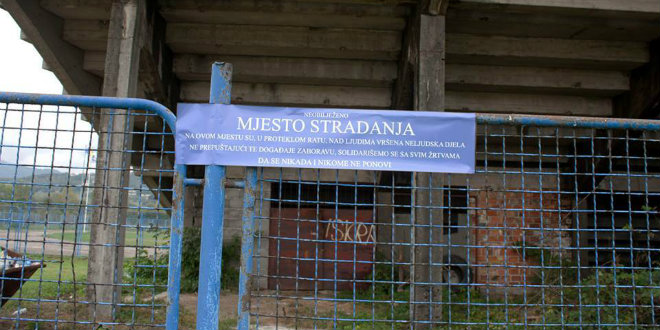 For the past three years, Amer Delic, Dalmir Miskovic, Cedomir Glavas and Tamara Zrnovic have been putting up memorial signs at unmarked places of wartime suffering in a series of guerrilla actions across Bosnia and Herzegovina, trying to send a message that every victim deserves respect.

The activists argue that memorialisation still depends on political will in the Balkans, where people commemorate their ‘own’ victims but not those of other ethnic groups, whose suffering is ignored, forgotten, or even denied.

“The marking of unmarked places of suffering aims to show that such places exist and to somehow encourage the questioning of the wartime past in the communities we visited, and even beyond,” Zrnovic told BIRN.

Zrnovic said that many such sites remain unmarked because those who suffered there in wartime were ethnic minorities in the areas in which they lived.

“It is therefore not publicly desirable to say that former neighbours or some other people were forcibly detained, killed, tortured or made to do forced labour used to live in those areas, let alone to raise monuments that remind people about it,” she said.

In some places, victims’ associations’ attempts to install a memorial have been blocked by the majority ethnic group in an attempt to deny that war crimes were committed there.

War memorials have long been a disputed issue in the former Yugoslavia, as a BIRN investigation highlighted in 2013.

Sometimes, Zrnovic explained, the problem is that the places where people were detained, tortured and killed were public facilities like schools.

“During the war, schools, kindergartens, [municipal] cultural centres, police stations, hotels and barracks were used as detention facilities, and with the end of the war, these facilities were returned to their [original] function,” she said.

When it was acceptable for the majority ethnic group in the area however, some of these places were marked, she added.

“We have examples of municipal buildings and schools with memorial boards,” she said.

Commemorations and war anniversaries are also often used for political and ‘patriotic’ purposes in the Balkans.

The anniversary of the Croatian Army’s victorious Operation Storm in 1995 is commemorated each year as a national triumph by the Zagreb authorities, but mourned by the Belgrade authorities because of the many Serbs who fled or were killed as a result.

The four activists thought up the ‘Unmarked Places of Suffering’ campaign at a training course in 2014 organised by the Centre for Nonviolent Action in Sarajevo.Since then they have placed signs at the locations of wartime crimes in Visegrad, Bugojno, Hadzici, Zvornik, Kladusa, Cazin, Drvar, Livno, Brcko, Bratunac and many other places.

According to Zrnovic, there are probably hundreds of unmarked places of suffering across Bosnia and Herzegovina, and almost no settlements without at least two or three locations which should be marked.

“When selecting the sites and cities we visit, we are guided primarily by our knowledge of events in Bosnia during the war, by the messages that we receive from citizens about many localities, and we are also led by the calls of associations of victims who want to cooperate with us and give us support for this activity, as well as the final verdicts of the relevant courts,” she explained.

When they undertake an action, the four activists mark seven to ten locations in the areas they visit over a four-day period.

When marking a site, they put up a sign which always has the same text: “Unmarked place of suffering. At this place, in the last war, people were subjected to inhumane acts. By not letting these events be forgotten, we express solidarity with all the victims, so this never happens to anyone again.”

However, they rarely return to the places they have marked - for safety reasons, Zrnovic insisted.

“In many cases, we have a fear of going back to a marked location, because locals see this kind of dealing with the past as a danger to them and the patriotism in them,” she explained.

The activists have been threatened on social networks, she added: “People who disagree with us are very free when they are hidden behind anonymity, [they] insult us and threaten us openly.”

It not known how many sites where people were detained and abused during the 1990s wars remain unmarked.

One of them, according to Zrnovic, is the Stajicevo wartime prison camp near the southern Serbian town of Zrenjanin - one of five such camps in Serbia where mostly Croat detainees were held.

The camp’s former prisoners have tried several times to organise a commemoration in Stajicevo on the anniversary of the start of the war, but have been prevented by fears of potential violence.

Asked whether Balkan societies will ever be ready to accept the suffering of ‘others’, Zrnovic argued that empathy remains a challenge to nationalist narratives.

“Better days will come when we realise that the processes of dealing with the past are no threat to our communities,” she said.