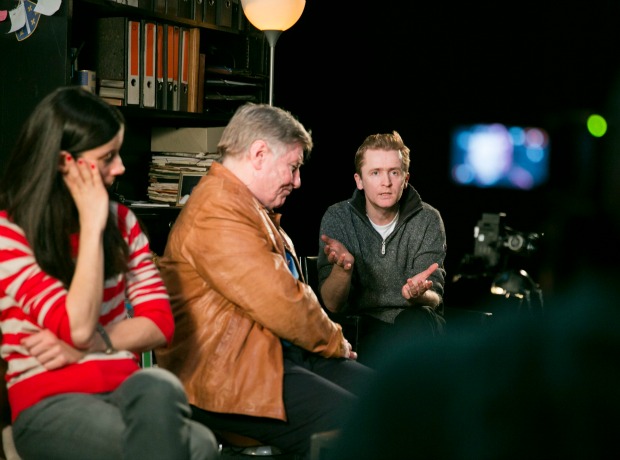 My father was killed immediately and thrown into a well. I survived because the driver of my school bus and a friend of my father recognised me. Then they deported me to a concentration camp in a school bus,” Sudbin Music recalls in his native language on stage at the National Theatre in Munich, shocking the audience with its authentic power.

In the play ‘The Dark Ages’, Music, a 41-year-old Bosniak from Prijedor in north-western Bosnia and Herzegovina, tells the story of how he survived the massive crimes committed in his hometown in 1992, when Serb paramilitaries and police killed, imprisoned and expelled local Bosniaks and Croats.

He said he met the play’s German director, Milo Rau, when he came to Prijedor to look at some of the sites of mass graves and former concentration camps.

Four other four actors tell their personal stories in the play as well - stories of surviving the siege of Sarajevo, the NATO bombardment of Belgrade in 1999, the destruction and liberation of the German city of Bremen in 1945, and of immigrants from Soviet Russia who came to live in Germany.

“We put the public into a state of confusion; are our stories true or fictional? In other words, each of us asks a question, where does our reality start from?” he explained.

At one point, after telling the story of how he exhumed his father, Music transforms himself into a contemporary figure of Hamlet, also playing his father’s ghost.

Music says that by acting in the play, he is honouring those who lost their lives during the war.“I erected some kind of monument to all the people I lost during the 1990s,” he said.

All the actors had doubts that what they were doing was a “striptease”, revealing their personal traumas on the scene, he continued. He also said that he worried about his family seeing the play, fearing it would be overwhelming for them.

“Nevertheless, I can't wait for us to perform in the former Yugoslavia,” he added.

Another actor in the play, 39-year-old Vedrana Seksan, from Sarajevo, said she is looking forward to performing it in the Bosnian capital despite being nervous abouther mother and other relatives watching her.

“At one general rehearsal, my 16-year-old daughter was in the audience. At one moment I heard her weeping and it was a very hard moment for me,” she said.

She explained that her daughter was hearing some of her stories from the siege for the first time because she did had not wanted to “burden” her with them before.

Her mother also offered some advice when they talked about the play, telling Seksan “to inform people in Germany never to use footwear for heating, because it ignites too fast and creates no heat”, referring to moments when people in besieged Sarajevo burned their shoes in attempts to keep warm.

“I told my mother: ‘But mum, they live in Europe, they have central gas heating.’ She just responded: ‘I had also lived in Europe with central heating [before the war].’”

During the process of creating the text for the show, the actors recounted their stories and thoughts on three topics – ‘mother’, ‘evil’ and ‘art’ – describing what each means for each of them. Their testimonies were transcribed for editing; Seksan’s alone was around 14 hours long.

“In the end, with a lot of alteration, my testimony is in the final version cut to some 15 minutes, which falls into a bigger story line along with the testimonies of the other actors,” she said.

“I never did this type of theatre before and I know I wouldn’t do it again, because it’s an experience which is beautiful, but also painful,” she added.

The problem with forgetting

“He got in touch with my cousin living in Germany and my cousin called me to show him around Prijedor, although he had no intention of taking me as an actor,” Music told BIRN.

After visiting Tomasica, the biggest mass grave from the 1990s war, Rau asked Music to take part in the play, which he refused to do at first because he had no prior acting experience. After a week, Rau called him again and Music agreed to take part by telling his life story.

Rau, the director of the play, said that ‘The Dark Ages’ is the second part of his ‘Europe Trilogy’. The first part was called ‘Civil Wars’ and focused on the conflict in Syria. The third, which will be staged next year, will be called ‘Empire’ and will focus on contemporary Europe.

“What I’ve tried to do is to tell the story of what happens when one age is turning into another age - for example, the end of Soviet bloc, the end of Yugoslavia, the end of Nazi Germany, and what comes after,” he said.

“There is one rule in this play and that is that everything said is true. Of course I don’t know if it is, for example, the truth of Sudbin Music, or if it’s the objective truth,” he said.

Rau said that the play, which was first staged in April this year, has generated powerful emotional responses.

“This play is extremely touching for a lot of people. You have people crying in the audience... We were quite surprised and, in a way, happy that such emotions surfaced, since we thought, ‘who would be interested in stories from Sarajevo or Russia?’” he said.

Rau believes the play is important because it tackles the European habit of forgetting the past for the sake of the future – something that is hard to do in the Balkans, where recent conflicts still shape everyday realities.

“It’s very problematic, especially for Vedrana and Sudbin, to try to forget what happened in the 1990s,” he said.

“In the end, as Sigmund Freud used to say, ‘What you bury alive will come back as a zombie.’”

‘The Dark Ages’ is performed at the National Theatre in Munich on Tuesday.