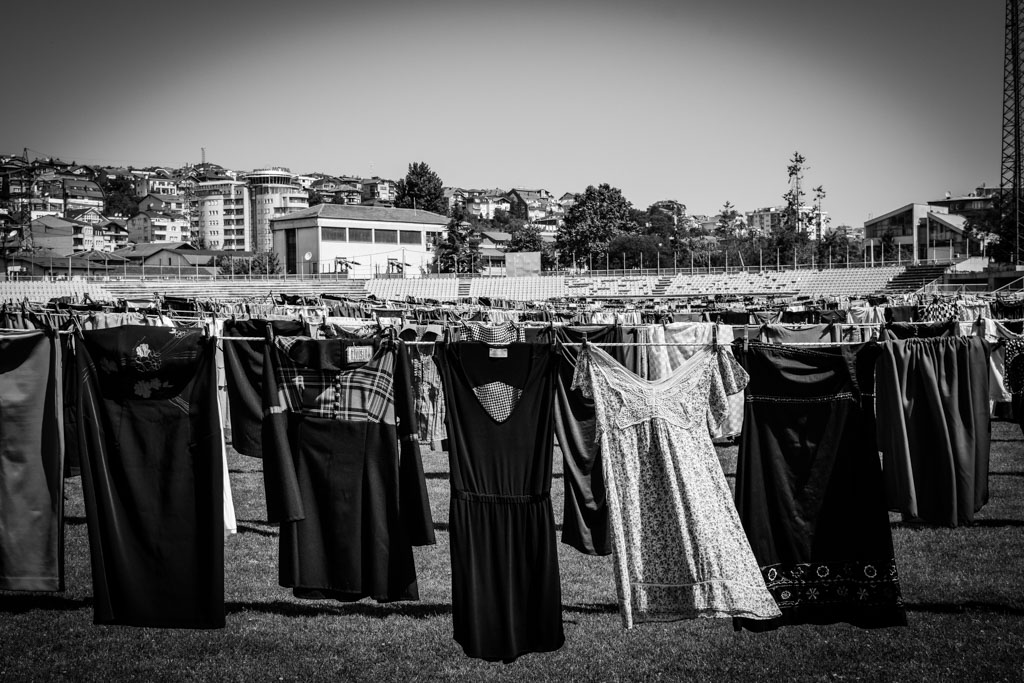 The story of separating from the crowd

H.A. does not find it easy to go out. It is not easy when she meets glances. It is not easy, especially when she sees men in uniform. She still suffers from the crime committed against her: a rape that lasted for hours by Serb soldiers and paramilitaries. Five of them she remembers.

The victim who comes from a village in Kosova tells how women were separated from other civilians who were forced from their homes, and were held the entire night, raped several times.

A mother of three repeated three times during an interview all the details of the most difficult night of her life, after which she says she does not understand why she continues to live.

Apart from being raped, the witness has also been physically assaulted. Most of the time she had been unconscious.

She tells how many times she gained her consciousness and was helped by no-one. She had been awaited by insults and successive kicks by soldiers, whenever she attempted to regain her conscience.

She was not alone. The victim says the entire house in which the crime happened, was filled with other women, who were then released together. She did not keep the events of that night a secret. Her husband, who during the war had been a KLA fighter, needed two weeks to abandon the idea of divorce.

First Person Narration: There Were Five of Them

I was born in a village back in 1960. Born into an average kind of family. I did the first five grades of schooling. My marriage was an arranged one. My husband was three years older than me. He went to Germany right after we married whereas I stayed here in Kosova. But he came back, he couldn’t stay there. When he came back, the war broke out. My daughter was just a baby when it started.

The first day the war came to our village I was having breakfast. We simply found ourselves under their fire. We came out to see what was going on. The village was full of Serbs. And they expelled us from our home.

We went to another village. We moved for two nights in a row. Then we decided to try and return to our own village. Then it continued like that… with sufferings.

I was holding my little daughter in my arms, and carried a backpack with some clothes for her. The other children were holding to my garments. We moved from one village to the other. In the beginning of the war we would not go very far. Not in the first attack. When we went back home, it was burned down to the ground. But we stayed in our own houses like that until the second attack started.

When it did, we went to another village again. When we got there, their armed forces found us and assembled us all in one field. They were shooting in our direction. Then they had us all walk to another village and then brought us towards the city. As we came out of that village, the Serbian forces started to take us women and put us aside. They brought vehicles and made us enter them. First they would take us one by one, then in the next village they put two in each. They would return some, and come back and collect others. When they pulled me from the crowd, I had my baby in my arms. They threw her away on the ground. I tried to pull back from their grip, and then three or four other Serbs came on to me. One of them kicked me in my stomach, they got my arms, dragged me and put me inside the car. Then they took us to a place and distributed us in two different houses. They came back to take us in the evening and sent us to another house.

They took us and then abused us. I lost my conscience. To this day, even when I see our own army and their vehicles, I look at them and I tremble from fear. It looks to me as if they will grab me and put me inside their vehicles.

Yes, they did send us there. I had lost my conscience. They took us and then came over us, and did whatever they pleased. When I regained my conscience, I could see that there were five of them. I remembered two of them that had pulled me inside that house, but then there were five of them. Nobody came to our help. When I saw them, I started to scream. One of them grabbed my arm and said in Serbian, “Get up, nothing happened. It’s not a big deal! Get up!” He pulled my arm and lifted me up. Then they started to hit me. I sat down and pulled my arms over my head, and they kicked my arms. They would not stop kicking me.

I was alone in that room but there were other women in other rooms. In the morning they left us on our own. The ones who released us were soldiers. And they would give away things like a liter of oil or shoes, or something like that.

I had a sweater, and a jacket. I put them and came out. The weather was all torn but I managed to tie it with a string and that’s how I came out. They had torn our clothes to undress us, and all I could find was that sweater.

They released us as a group and we came back together. We found our family members crying, they had thought that we had been killed. We did not dare tell anyone what they had done to us. We said that they beat us up really badly, but nothing else. I was so shocked from the rape and the kicks, I did not even recognize my own children when we came to them. I just remembered how they threw away my baby. And we came together and stayed there together until the end of the war.

During the war my husband was in the mountains. He was with the KLA. We only saw him very rarely. He would come at times and bring food to us.

I was so exhausted physically. I couldn’t stop thinking what had happened to me. I kept thinking how they threw away my baby. It would be so much better to have died than have to go through all of that.

My husband would not accept it initially

I told my husband later, when the war ended. Nobody else knows. I thought to myself that he might learn it from others, so it is best that I tell him myself. So the war ended and we came back together, in our burnt down house, without anything to our name. So I had to tell him. We sat down and I told him what had happened. “People are talking about how they collected women and raped them.”

I was so embraced to tell him. Ever since the war ended he would see me cry constantly and he would ask me, “What is it? What’s wrong? Why are you crying?” He would try and console me saying “The children are OK, we are OK, we’re all alive, why do you feel so sad?” he’d say. “Why?”

I’d say, “How can I not worry? Can’t you see we have no house? What food can I cook for the children?” I was trying somehow to avoid telling him, and answer in a manner that won’t make him suspect me. And then he spoke about some other case of rape, and I started thinking that he might have heard about my case too, that someone might have told him. So I sat down and told him what I had experienced. I said, “I really am sorry for being one of them raped women. You can do as you please, but that’s what happened to me.” They burned us with cigarette buds, they have kicked us and stepped over us with their feet. I had bruises until very late. I said, “I was myself a victim of rape.”

“What?” he asked surprised.

He said, “Get your things right now and go back to your home. You’ve been in the hands of Serbs; they did as they pleased with you. You are no good for me, and I can no longer be with you!”

A week passed on like that. Two weeks passed and then he came to me and said, “Sorry, I have been wrong. I could do nothing to protect you, and it’s not your fault.”

So our life continued. Our little daughter grew up. But people started talking, and the circumstances in the village were such that we could not continue to live there anymore. So we left the village and moved to a city. But when we went there, we were tenants. It was not our own property. Then (sighs)...

Well they started to talk about things in general. My husband said to me that they say it to him too, “Your wife this, your wife that.” So he thought it was best to leave the village altogether. And we went and started to rent in the city.

It has been very difficult ever since that day. I say to myself, “My God, I hope nobody sees how we are made to live here.” I feel very bad. But nobody knows here apart from my husband. But when I go out on the street I feel as if everyone is looking at me.

To other women who experienced the same I’d say: find some strength to overcome it and live on. Don’t use me as an example. They should not stress like I do. And the most important for me is to catch those who have done those wrongdoings. And give them the deserved punishment. But to this day none of them got what they deserve. I, for myself, feel terrible. I feel worthless, really awful. I go out, and when I walk, I think to myself, “My God, why am I living?” I see a vehicle of our own army, our own police, and I think it is them. I get goosebumps all over my body. Before I started to come here and open up to speak, I would not dare go out at all. It is really hard. (sighs)

This story is part of "I want to be heard: Memory book with stories of women survivors of torture during the last war in Kosovo", powered by forumZFD and Integra in collaboration with KRCT - The Kosova Rehabilitation Centre for Torture Victims, and supported by German Federal Ministry for Cooperation and Economic Development, Rockefeller Brothers Fund, Charles Stewart Mott Foundation and UN Women.