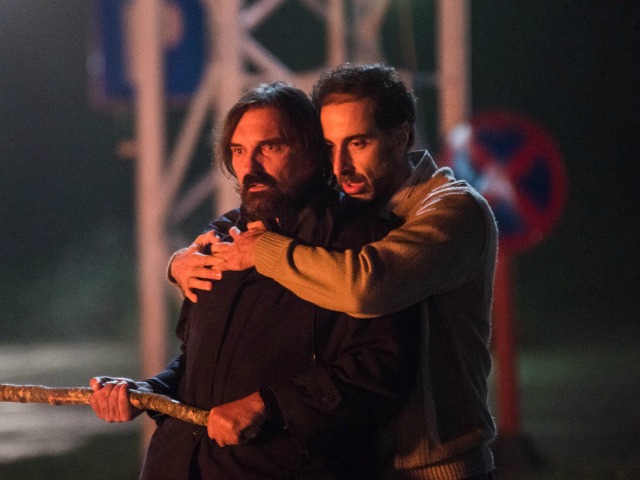 A new feature film made by a Bosnian war veteran dramatically explores the minds of men who fought in the 1990s and how it affected them psychologically and emotionally.

At a remote hotel in Bosnia and Herzegovina, a group of veterans who fought on opposing sides during the Balkan wars have come together for a group therapy session organised by an international peace organisation.

Behind their rough facade, the men are hiding a world of emotions - from humiliation, guilt and anger to depression and disillusionment.

As they open up and expose their inner conflicts to the others, it creates antagonism, but some unlikely alliances are also born.

When the veterans begin to face the inner demons that still linger on inside them 20 years after the war ended, they undergo a healing process by interacting and developing understanding for each other, telling their stories and imagining themselves in each other’s shoes.

This is the plot of director Alen Drljevic’s debut feature film ‘Men Don’t Cry’, which had its Bosnian premiere at the Sarajevo Film Festival last weekend.

Being a war veteran himself, Drljevic had the idea of visiting a therapy session for traumatised soldiers from the Balkan wars in the 1990s and doing a documentary about how former enemies reconcile.

“However, what happened there pulled me in so much. I thought the war was behind me, that I went through this, forgot about it – but then I realised that I have not and that these things are buried deep within me,” Drljevic told BIRN. “Participating in the workshop had a cathartic effect on me.”

When he talked to producers Jasmila Zbanic and Damir Ibrahimovic about it, they agreed it should be a feature film; a drama not a documentary.

What exactly happened during the wars and how they started remains a matter of heated dispute across the Balkans, but Drljevic’s film does not get into this debate.

“This film did not have the goal of telling a ‘truth’, it simply wants to speak about the possibility of understanding between people,” the director explained.

“I would like to trigger the audience into maybe reconsidering their own personal ‘truths’,” he added.

Drljevic and the team from the company that produced the film, Deblokada, now plan to use it for reconciliation efforts around Bosnia.

“We want to air the film in Bosnian towns and gather veterans from different armies – just like in the film, people who shot at each other - to watch it together. After that, we would have them talk to each other about it,” Drljevic said.

“Some may not like this idea, but I think most of them are ready to speak about this. I believe they have a deep inner need to talk about it,” he added.

Although many films revolving around the war have been made since the mid-1990s, ‘Men Don’t Cry’ stands out. It does not focus on telling a war story, but rather on the psychology of those who went through it.

“I’ve heard many people say, ‘We have had enough of war movies, we talk about it too much,’” said Drljevic.

But he believes there have not been too many, but too few.

“There are a lot of bad movies, those who try to tell us some ‘large truths’. I believe we lack films that are not shallow, that tackle the subject deeply,” he explained.

“In my opinion, we are just now starting to make such movies. In Germany as well, true reconciliation began only 20 years after World War II. We are now within this time frame,” he added.

‘No one could remain indifferent’

Renowned Bosnian actor Emir Hadzihafizbegovic, who plays one of the veterans in ‘Men Don’t Cry’, is himself also a veteran who fought with the Bosnian Army.

Hadzihafizbegovic described the drama as “one of the most important post-war films”.

“It seems to me that we who fought each other would have a much easier time in achieving peace and a civilised life than our politics, which haven’t managed to do this for years,” he told BIRN.

‘Men Don’t Cry’ had its premiere in July at the Karlovy Vary International Film Festival in the Czech Republic, where it won the Europa Cinemas Label award for Best European Film and the Special Jury Prize.

“Reactions to this film in Karlovy Vary were such that no one in the audience could remain indifferent - and this is in a place that had nothing to do with our troubles here. They recognised the universal value of this film,” Hadzihafizbegovic said.

It also left a deep impression on Sarajevans when it was shown at the annual international film festival on Saturday.

Although there is no actual shooting, it captures a tense war-like atmosphere as the veterans, one by one, break down and recount stories from their past.

“I was completely blown away by the acting. The film digs deep into the minds of people who shot at each other, and a lot of times had me questioning what I would have done in their place,” said Elmira, who was in the audience at the Sarajevo screening.

“After this film, I view a gun as a red-hot iron. However you handle it, you get burned,” she added.