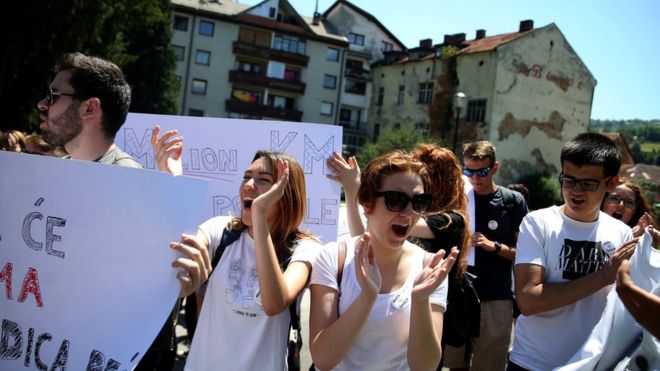 Flush with success, students in Bosnia have vowed to continue their struggle against ethnic segregation in schools.

At the weekend, the regional government dropped plans to force students in the town of Jajce into two ethnically based schools after a year-long campaign.

The Jajce students were given a hero's welcome by pupils from other towns as they arrived in Travnik, the capital of the Central Bosnia Canton, on Tuesday.

They now want to end segregation in the remaining 57 schools in the entity.

"We saved our school... now the time has come for every other school in Bosnia and Herzegovina to fight against division and segregation," Nikolas Rimac, a Croat student who helped lead the struggle in Jajce, told the BBC.

The practice of separating students in the same building to learn from differentiated Bosnian, Serbian or Croatian curricula was introduced following the Balkan war of the 1990s.

It persists in spite of a ruling by the Federation Constitutional Court that it is discriminatory. The US ambassador and international organisations, such as the Organization for Security and Co-operation in Europe, have also opposed the practice.

Rejecting the politics of the past - Guy De Launey, BBC News, Sarajevo

Segregation in schools is a hangover from the nationalist politics which sparked the conflict of the 1990s and continues to blight the lives of Bosnia's people.

Sometimes this produces absurdities such as the insistence that students of a particular ethnicity should be taught in "their" native tongue. The notion that Serbian, Bosnian and Croatian were distinct languages was thoroughly debunked in March, by an alliance of linguists from across the former Yugoslavia.

This infuriated nationalists who profit from perpetuating divisions among Bosnia's people. But it vindicated those who believe that the country will remain in the mire until its elected officials start serving the common good rather than their patronage networks.

The battle is far from over. Earlier this month the president of the mainly-Serb Republika Srpska ordered schools in the entity to remove references about the genocide at Srebrenica from history textbooks.

It was another example of how nationalists continue to use education as a tool for division. But the victory of the Jajce students shows that younger Bosnians are now rejecting the policies which have hobbled their country for more than two decades.

Under the system known as "two schools under one roof", the children are physically divided and cannot socialise.

Defenders of the system say it preserves ethnic identity and prevents one ethnic group from dominating another.

But campaigners say it fosters tensions and suspicions from an early age.

The schools are "prisons and factories of hatred," Mr Rimac said.

He said protests such as that on Tuesday in Travnik showed how such divisions could be broken down.

"It was brilliant," he told the BBC. "All those wonderful and kind people... standing together in the name of knowledge, education, unity and justice."