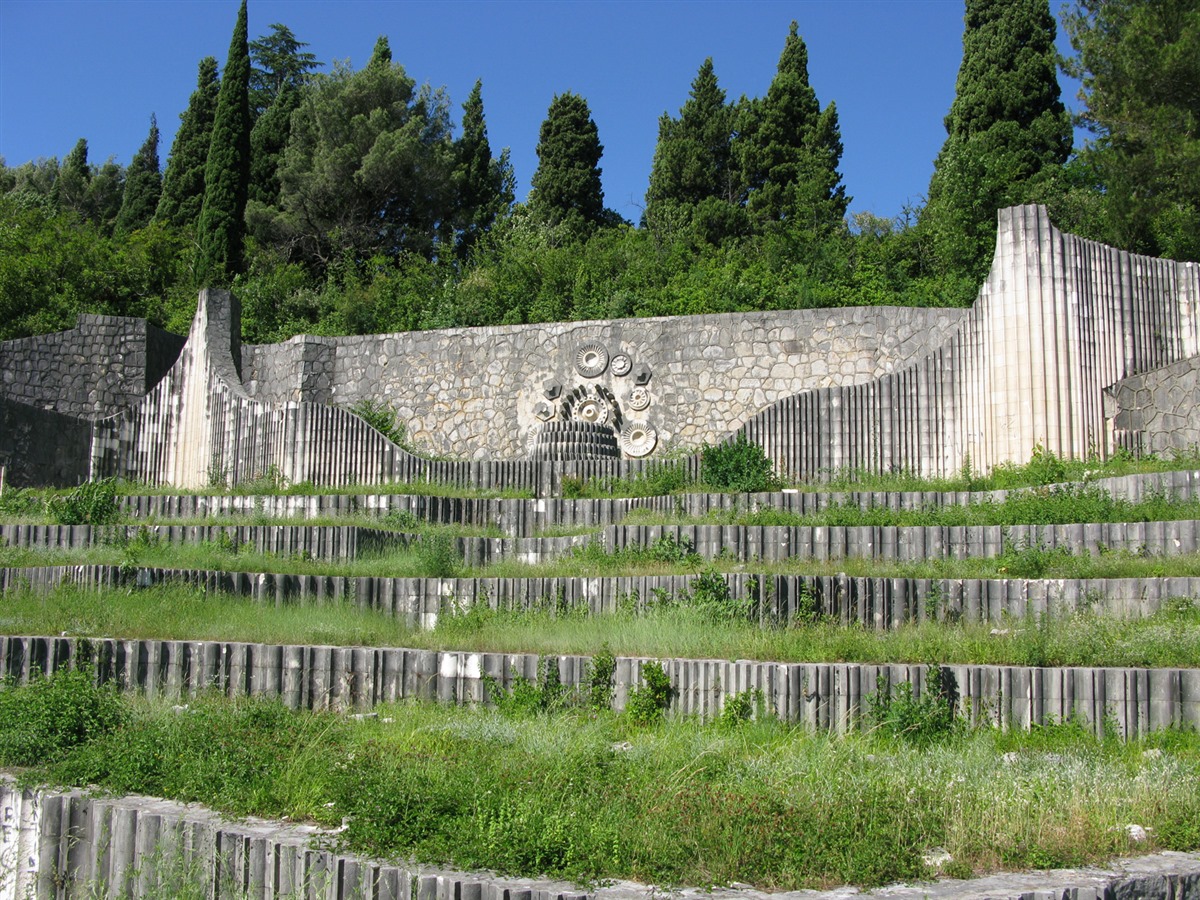 The monumental Partisans’ Cemetery in the Bosnian town of Mostar, where Yugoslav anti-fascist WWII fighters were buried, has been abandoned to decay, a victim of changing attitudes to history in the 1990s.

“The Partisans’ Cemetery? Yeah, Communists come there for their annual commemoration in… I forgot the month. Tourists? Some come, not many, but some do,” said a waiter in a bar in the centre of the southern Bosnian town of Mostar, just across the street from the huge memorial to fallen World War II anti-fascist Partisans.

The Communists he was referring to would be the associations of anti-fascists who commemorate the Day of the Liberation of Mostar, marking the day when Partisan forces entered the town on February 14, 1945, after German and other Nazi-allied forces retreated. Commemorations are also held on other significant dates.

Hidden in vegetation, without visible signs in the street outside, the Cemetery has been abandoned. Some individual tourists can be found near the site, trying to find its location on navigation apps and maps, but not on the site itself.

The massive construction, with its 300-metre-long paved ceremonial pathway rising more than 20 metres up the hill, was built in 1965 by famous Serbian architect Bogdan Bogdanovic, known for his many memorials to the Partisans and fascist victims - the most notable being ‘Flower’ monument dedicated to the victims of the WWII Croatian fascist concentration camp at Jasenovac.

Seeing it as an “acro-necropolis” (‘city of the dead’), Bogdanovic built the memorial site as the resting place for 560 Partisan fighters from Mostar, each given their own tombstones with the place and year of their births and deaths engraved on them.

Skilled stonemasons from the Croatian island of Korcula built the monument over several years, using over 12,000 carved limestone pieces, rubble from the town’s destruction during WWII and traditional stone roof tiles recycled from Mostar houses.

A serpentine pathway and two stairways lead to a big lower platform from where the view stretches over Mostar. From a lower platform, a stairway behind the wall leads to a smaller upper platform with a fountain and the central architectonic feature - a ‘cosmological sundial’.

“The Partisan necropolis was Mostar in miniature, a replica of the town on the Neretva [river going through Mostar],” Bogdanovic wrote in his essay ‘Mostar’s City of the Dead’, which was published in 1997.

However, the war that ravaged the town in the 1990s during conflicts between Croats and Bosniaks as well as the Yugoslav People’s Army, completely changed attitudes towards the monument and the former Yugoslavia’s anti-fascist heritage in general.

As well as not being properly marked, the monument has been left to (most likely) adolescents who vandalise the site, covering it in swastikas and Croatian WWII fascist Ustasa insignia, confronting their ideological ‘enemies’ - the Communists - with their graffiti.

While most of the Nazi symbols are crossed out with another layer of spraypaint - most likely done by anti-fascist groups - the graffiti has not been removed.

The site is also covered in glass and plastic bottles and all sort of garbage, while vegetation is overgrowing the monument, parts of which have been destroyed. Some of the tombstones have been torn up and broken into pieces, while the fountains are no longer functioning.

Dragan Markovina is a historian born in Mostar, who has lived in Croatia since the 1990s war. In 2014, he published a book ‘Between Red and Black: Split and Mostar in Memory Culture’ showing how the culture of memory changed in the 1990s from an anti-fascist and socialist orientation towards downplaying the crimes committed by the Croatian WWII fascist Ustasa movement, and even glorying it.

Markovina recalls how the first act of destruction at the monument was carried out with explosives during the night from February 13 to 14, 1992, before the last commemoration took place at the site and before the full-scale war broke out in Bosnia and Herzegovina.

“A few explosives were detonated, damaging a few stone panels… most likely sending a message to people who planned to visit the commemoration the following day that commemorating the event at the Cemetery has come to an end,” he told BIRN.

The message was received: only around 50 people showed up for the commemoration, as fear prevailed.

“We can say that, symbolically, the Cemetery was the first thing fired upon in Mostar,” Markovina said.

The Catholic Church often mentions the war crime that was committed during the liberation of Mostar on February 14, 1945, when Partisan forces killed seven priests from the local Franciscan church. Their bodies were never found, and no one was convicted of their killings.

Nevertheless, Markovina describes as “mythological stories” claims that it is mostly the descendants of members of the defeated Croatian fascist Ustasa movement who are vandalising the Cemetery.

He points out that many people joined the anti-fascist Partisan movement in Mostar; out of the city’s pre-WWII 18,000 inhabitants, around 6,000 joined the Partisans, of whom over 750 were killed during the war. The anti-fascist movement was much stronger than the Ustasa in the town, he underlines.

When asked by BIRN about the monument, people in Mostar avoided answering, saying that they were not interested. The nearby university campus and the central football stadium attract mean that many young people who pass by the Cemetery, although they appear not to notice it or pay it any attention.

Markovina claims that the entire culture of memory has changed, suppressing the memory of the Cemetery, which the younger generation sees as a memorial dedicated to anti-fascism, but also to Communism. This historical revisionism in the ethnically-divided town comes predominantly from the Croat side, he added.

The Croat-controlled western part of the city completely changed the names of streets, squares and parks in the 1990s, switching from the names of notable people from socialist times and anti-fascist fighters and military units to medieval Croatian kings - but also Ustasa officials, such as Mile Budak.

“You now have a completely new generation of young people, with completely different relation to the events of WWII. The bulk of these younger generations came to Mostar as children or were simply born during or after the 1990s war, while their parents came from elsewhere. This is why a large proportion of these people have no intimate connection with Mostar before the 1990s war,” Markovina explained.

“One of the most tragic thing in the whole story is that the building of the department of art history on the campus is literally 100 metres from the Cemetery… [and] the professors from the art history department have never talked them about something they can see from their window that is world heritage,” he said bitterly.

Although Mostar’s Association of Anti-fascists and Fighters of the People’s Liberation War (WWII) advocated that the site should become a national monument in 2006, thus putting it under state protection, the Cemetery has nevertheless been left to decay.

Markovina explained that listing a monument as protected only prevent its physical removal.

The head of the Association of Anti-Fascists, Sead Djulic, blames federal institutions for neglecting the site, pointing the finger at the Bosnian Culture and Sports Minister Zora Dujmovic, or who he thinks is not doing her best to protect the Cemetery.

Djulic, whose association organises the annual commemoration at the Cemetery on February 14, confirmed that there are even plans to remove the Cemetery and construct some kind of summer stage for concerts and other events.

He said that both the town and the Culture and Sports Ministry look at the Cemetery without sympathy simply because it represents anti-fascism. Anti-fascists are solely seen as Communists, although “many weren’t Communists”, he added.

“The Partisans’ Cemetery annoys [them] because… it is an anti-fascist cemetery, because it is the cemetery of the victorious army in World War II, and the dominant politics in Mostar has placed itself on the side of the losers in that war… glorying the Ustasa and [Ustasa leader Ante] Pavelic’s ideology. That is why there is a need to destroy this monument,” he claimed.

“Its demolition serves to ‘whitewash’ history and proclaim war criminals and villains as heroes, saints, and just people,” he added.

He concluded that the UN culture organisation UNESCO and European institutions for cultural heritage should react, especially as “Europe emphasises its anti-fascism”.

Bogdanovic, who died in 2010, saw the wartime destruction of Mostar and its landmark Old Bridge as well as the mistreatment of his Cemetery.

Although during Yugoslav times Bogdanovic saw the memorial as a symbolic way for the “dead Mostar” to look into the eyes of the “living Mostar” for which it died, he became pessimistic after the 1990s war.

“And all that is left of my original promise is that the former city of the dead and the ex-city of the living still look [at each other], but look with empty, black, burnt eyes,” Bogdanovic wrote in ‘Mostar’s City of the Dead’.

Despite the fact that there are few prospects for the revival of the Partisans’ Cemetery in the near future, Markovina still believes that it can play a positive role in the deeply divided town.

“The Cemetery can be a symbol of reconciliation in the city. The Old Bridge can’t be that anymore because it was brutally destroyed by one army and now has been almost completely [symbolically] appropriated by Bosniaks from the Old Town,” he explained.

“On the other hand, the Cemetery has been abandoned by everyone… and people of all nationalities [ethnicities] died and were buried together there,” he said.