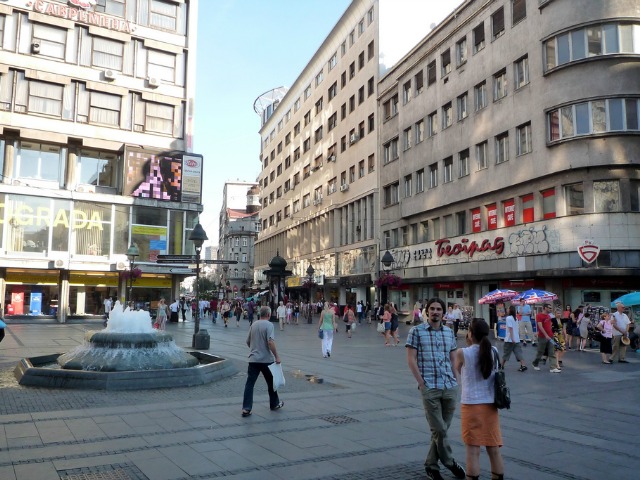 The Fates of Balkan and Western Democracy are Inseparable

The crisis of democratic governance in the Balkans is obvious. But the overt turn towards authoritarianism in countries like Macedonia and Serbia is being accelerated by the still more significant crisis of democratic norms and constitutional government in the West. These two dynamics are intrinsically linked – as is any hope of resolving them.

Take the recent assault on the Macedonian parliament by VRMO-DPMNE-backed insurgents and US President Donald Trump’s sudden dismissal of FBI director James Comey. Both events share an uncanny similarity. In each case, powerful elites - Trump and the VMRO-DPMNE leadership, respectively – are obstructing the rule of law and sabotaging constitutional norms.

Then there is the news that Sebastian Kurz, Austria’s Foreign Minister, is determined to bring about the collapse of Austria’s coalition government in order to advance his own career. The result of Kurz’s scheming, however, may be the long-brewing triumph of the far-right FPO. No one should be surprised that the man who stumped for Gruevski’s authoritarian team in Macedonia would have a reckless disregard for Austria’s own democratic stability.

Indeed, the far right is now a credible electoral force across the West. Emmanuel Macron’s decisive win in the French presidential election aside, National Front leader Marine Le Pen doubled her father’s performance from 2002. And even where the far right appears a marginal electoral factor, as in the UK, it still manages to shape the public discourse in a reactionary fashion.

In this too we should see a Balkan reflection. For years, the EU and US have tolerated the normalization and mainstreaming of the most extremist elements across the former Yugoslavia. At Bleiburg, for instance, HDZ leaders from Croatia and Bosnia convene every year –not to commemorate the deaths of innocents but the defeat of the fascist cause. It is the largest far-right gathering in Europe but passes off each year with barely a murmur from Brussels.

In Serbia, the far right has coalesced into a stable electoral factor. Its comparatively small vote share – nearly half a million votes at the 2016 parliamentary elections – obscures the fact that the core tenets of its ideology are widely shared across the political spectrum. We see, in other words, the complete relativization and denial of Slobodan Milosevic’s responsibility for Yugoslavia’s dissolution and his wars of aggression (and extermination) across the region.

Even when the EU acknowledges the presence of an extremist threat in the Balkans, it misses the mark. While gallons of ink are spilled on the (largely overblown) presence of Islamic State affiliates in the Balkans, the real issue is that self-identifying Muslim leaders in the region, like Bosnia’s Bakir Izetbegovic, want to emulate Turkey’s President Erdogan, not al-Baghdadi. And they rely on nationalism, not religion, to advance their authoritarian ambitions.

Having allowed the situation to metastasize to this degree, it is little wonder European and American policymakers find themselves so blindsided by the far-right threat at home. After all, they’ve spent so long boiling the proverbial frog in the Balkans that they grew numb to the erosion of democratic norms as an actually existing phenomenon. History, recall, had ended.

This is not to say that the Balkans are responsible for the crisis of Western liberal democracy. But the Balkans were and remain a bellwether for the kinds of political movements that Western leaders should have prepared themselves to confront. If neo-fascists, authoritarians, and hired goons are acceptable in the politics of Zagreb, Sarajevo, Belgrade, and Skopje, it was only a matter of time before such types migrated to Paris, London, Amsterdam, and Berlin.

Some might retort that the growing far-right threat in both the West and the Balkans is being artificially inflated by strategic Russian investment and sabotage. Doubtlessly, Moscow is keen to strengthen any dynamic which it believes may advance its goal of crippling and, eventually, dismantling NATO and the EU. But if Russia – a country with an economy barely the size of South Korea – has managed to sow all this chaos, it is because the West has allowed it to do so, through a combination of ignorance and incompetence.

If it is still possible to right the collective ship of liberal internationalism and the democratic world order - which none of us should take for granted any longer - it will require a global agenda. In the context of the Balkans, this means that the same rules must be made to apply in Belgrade and Brussels, Skopje and Berlin, Sarajevo and Paris. An assault on democratic norms in the Balkans should be treated with the same urgency as such a crisis would precipitate within the core of the EU.

A failure to do so will not mean merely a descent into chaos in southeastern Europe, a process that is already underway. It will consume Europe as a whole. Consider only the political earthquakes (in)directly wrought on the continent by the Syrian Civil War. And then remember that the actual, physical boundary between that hurricane of violence and Europe proper is the Balkans; the volatile, illiberal, impoverished Balkans.

Europe’s fundamental security interests depend on restoring and reinvesting in the democratic viability of the Western Balkans. The more credible and significant the effort, and the more blunt we are about the stakes, the greater our collective chances at success. If we fail, rest assured, we will fail (and suffer) together.

Dr Jasmin Mujanovic is a political scientist specializing in the politics of southeastern Europe and the politics of post-authoritarian and post-conflict democratization. His first book, “Hunger and Fury: The Crisis of Democracy in the Balkans” is now available for pre-order from Hurst Publishers.