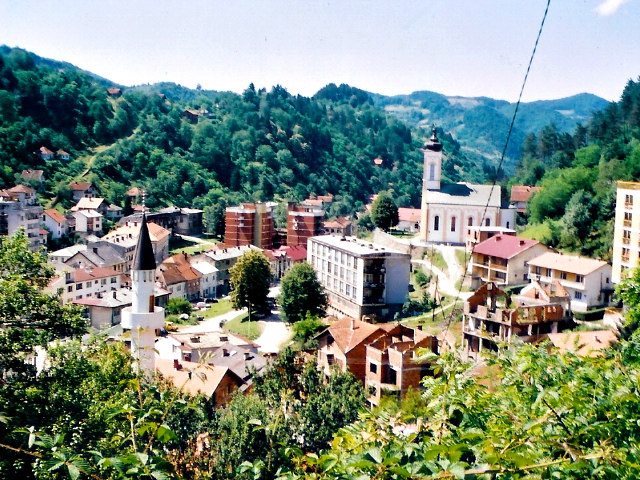 Srebrenica’s First Serb Mayor Tries to Escape the Past

Mladen Grujicic, Srebrenica’s first Serb mayor, says he wants to look beyond the trauma of war and the bitterly-contested genocide debate to seek a better future for the depopulated, impoverished town.

“When people see things going forwards, they will stop going back to the past. The past has only created conflict and animosities, and brought us into poverty,” Srebrenica’s mayor Mladen Grujicic told BIRN in an interview in his office in the eastern Bosnian town’s municipal building.

Grujicic, a 35-year-old former chemistry teacher, is the first Serb mayor of the town, elected amid some controversy in October last year because until then, the local municipality chief had always been a Bosniak - although the newcomer has insisted that his administration’s main strategic objective is creating a better future for everyone in Srebrenica.

He said that although he has been labelled a nationalist by some local media, he has a great relationship with people of all ethnicities in Srebrenica - and that while he is proud to be a Serb, he represents all the town’s inhabitants.

“This is my town as much as it is the town of all of its other residents. I took up a role that brings a lot of responsibility with it in order to change things for my own child, and for the children of others - because I plan to keep living here, to extend my family here, to work here,” he said.

“I will do anything I can to make this city better and more beautiful,” he added.

While Grujicic prefers to sidestep the more bitterly-contested topics and focus the conversation on the future, it is Srebrenica’s dark past that has made it infamous all over the world - the massacres of more than 7,000 Bosniak men and boys by Bosnian Serb forces in July 1995.

The war years also left their mark on the population of Srebrenica, where 36,000 people lived before the conflict - more than 27,000 Bosniaks and some 8,300 Serbs.

Despite many international, regional and local projects, the town’s economy has never recovered from the war, and its residents - Bosniaks and Serbs alike - have continued to leave in search of employment opportunities.

Grujicic said that the population has now fallen even further.

A gradual reduction in the number of Bosniak voters as well as growing political quarrels within and between Bosniak political parties led to his election as the town’s first Serb mayor and the first majority for Serb parties on the city council in many years.

The election of Grujicic raised concerns among many Bosniaks, who feared that he would ignore or even actively undermine their special status in Srebrenica.

One of the main Bosniak concerns was related to how he will deal with the annual commemoration of the Srebrenica genocide on July 11, especially bearing in mind that in the past he has denied that the 1995 assacres constituted genocide.

Grujicic told BIRN however that he has never denied that war crimes were committed in Srebrenica, stressing that he merely questioned the legal qualification of these crimes as an act of genocide, despite the verdicts of international and Bosnian courts.

“I think the truth about Srebrenica has not been proven, and that this is a process which will take much longer,” he said - a view which isn’t likely to appease Bosniaks.

“Of course, this narrative should not be put to the side, but I believe everyone should do their own job. Historians should deal with history, while the mayor should lead the municipality, instead of dealing with the past,” he added.

“I am not a historian, I am a citizen who wants to change something in Srebrenica, to create better living conditions and keep people here.”

He said however that the victims of Srebrenica must be honoured, stressing that he has not changed anything in the budget for the planned July 11 commemoration, but has only increased the money set aside for commemorating Serb victims in Srebrenica as well.

He insisted he would never obstruct or bring into question the Srebrenica commemoration, and is ready to support the organisers with any help they need, but does not want to impose anything on it from the outside.

Under to the Dayton peace accords which ended the 1992-95 war, the town became a part of Bosnia’s Serb-dominated entity Republika Srpska, but for many years it was run by Bosniak mayors and had a Bosniak majority on the local council mainly thanks to votes from Bosniaks who had left the town but were still registered to vote there.

Now with a Serb in charge, another issue of great concern for Bosniaks is Grujicic’s friendly relationship with Republika Srpska President Milorad Dodik, who for a long time has been advocating the secession of Republika Srpska from Bosnia and Herzegovina, and has repeatedly been criticised for his nationalist views.

Grujicic does not think his relationship with Dodik should be a problem, insisting that Dodik has expressed interest in helping Srebrenica.

“There are some Bosniaks and Serbs who do have political conflicts here, but when we see a sick person, a homeless person, a family without a house, we can easily agree on helping them. No one’s political standpoint should undermine help for those who need it,” he said.

Some Bosniaks also expressed concern after the Srebrenica council at the beginning of March awarded Serbian Prime Minister Aleksandar Vucic a golden plaque - the local assembly’s highest honour - for his contribution to the town.

They claimed that Vucic did not deserve this, as Serbia still officially denies that the crimes committed against Bosniaks from Srebrenica during the war were an act of genocide.

Vucic was attacked by angry mourners when he attended the 20th anniversary commemoration of the massacres at the Srebrenjica memorial site in 2015.

But Grujicic explained that even before he became mayor, Vucic had promised to donate five million euros to the Srebrenica municipality from Serbian government funds.

Two million euros have already been paid into the budget, while the other three have been earmarked for different projects, such as the construction of new roads, a kindergarten which is to start construction in April, and the building of two production facilities in the village of Potocari.

“Serbia said it will not get involved in our projects, it will only support what is needed,” Grujicic told BIRN, and added: “Anybody who wants to help is welcome.”

Focus on the living

According to Grujicic, Srebrenica has often been “collateral damage” in the endless political bickering between Bosniak and Bosnian Serb politicians.

This is something he says he wants to change, arguing that in Srebrenica it is about time for the living - and not only the dead - to receive some attention as well.

As in many other underdeveloped communities across Bosnia and Herzegovina, a lack of job opportunities is perceived as the single biggest problem in Srebrenica, and this is what Grujicic says he wants to focus on.

He says that his government is already in contact with many investors, including a Slovenian company which is interested in building a thermal power plant in the region, which would provide employment for many residents.

Past donations have not benefitted the town, he cautioned, claiming that many people have “made a fortune out of Srebrenica” by siphoning off funds.

“Srebrenica was only a reason for someone to donate, and then the donation would be diverted towards somewhere else,” he said.

The town’s image has also deterred longer-term investors, he added.

“When you create an environment where people feel it is unsafe, then they will not come here and open any factories,” he said.

“We are trying to send a message of peace from here. We have a responsibility towards the citizens to keep them here, because until now, they have been moving away en masse.”