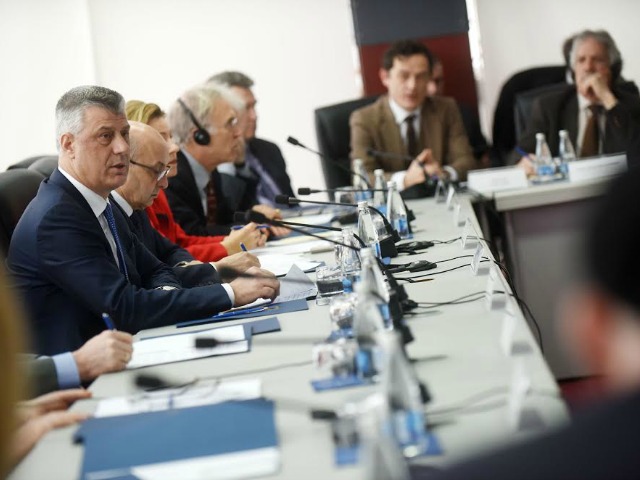 President Hashim Thaci announced a new Truth and Reconciliation Commission, which he said was intended to encourage mutual forgiveness among Kosovo’s Albanians and Serbs.

Hashim Thaci on Monday launched consultations to establish the new commission, saying that reconciliation between Kosovo’s Albanians and Serbs was not dependent on Serbia apologising for its role in the 1998-99 war.

“Someone could ask if an apology comes first and then reconciliation. But the truth is that reconciliation cannot have conditions, but it happens with the will [to achieve it] and a good feeling,” said Thaci, who was the political leader of the Kosovo Liberation Army during the conflict.

He said that remembering what happened during the war and establishing the truth was important, but also argued that people should not seek revenge.

“New generations must know what previous generations did. Mutual trust must be earned, not denying [what happened] but taking responsibility and respecting the dignity and integrity of the parties [involved],” he said.

Thaci said that the commission would support the judiciary in prosecuting war crimes.

As well as senior state officials and ambassadors, representatives of Kosovo Albanian and Serb war victims’ families attended Monday’s consultative meeting about the establishment of the commission.

“First, the truth must come out, then the reconciliation,” said Bajram Qerkini, a representative of Kosovo Albanian families of missing persons.

“There are more than 100 children under the age of eight who are still missing. We are the people who can lay down the hand of reconciliation at the moment when the truth comes out,” Qerkini added.

“We want to know the truth about those who committed crimes and we want justice. Everything can be replaced but people’s lives. Let’s head toward reconciliation,” Trifunovic said.

“There are thousands of innocent victims and there is still no justice for them. Dozens of massacres took place, for which no one has been convicted,” said the head of the Kosovo Assembly Kadri Veseli.

Prime Minister Isa Mustafa said that despite what happened in the past, Kosovo and Serbia should not be held hostage by history, arguing that the commission could assist in the process.

“All this will help to clarify a common future,” Mustafa said.

But Thaci’s initiative was greeted with scepticism by a former European diplomat who said that a similar commission, launched by former Yugoslav President Vojislav Kustunica in 2001, failed to achieve anything.

“This commission needs to find a common goal of both ethnicities and a credible person who represents both communities to lead this initiative,” said Daan Everts, the former chief of the OSCE mission in Kosovo.