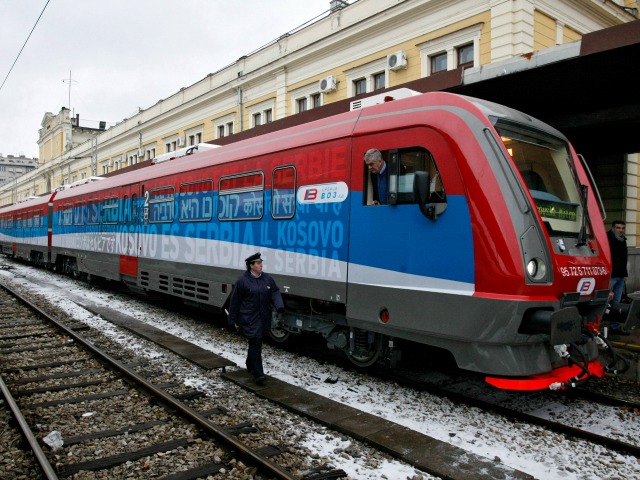 Serbs in Kosovo say that the recent ‘propaganda train’ dispute between Belgrade and Pristina left them worried about their security and fearful that they are being used as political pawns.

“We feel abandoned - neither Serbia nor Kosovo care about us, not to mention the internationals. Put simply, we’re disappointed, angry and frightened,” Zivorad Lazic, a 57-year-old professor at the Economy School in Laplje Selo near Gracanica in central Kosovo, told BIRN.

Lazic is not alone in his concerns. Following the sharp rise in tensions between Belgrade and Pristina recently, Serbs in Kosovo say they fear for their safety and their future.

They believe they are being left out of decision-making on major issues that affect their lives, and are being used as pawns in the never-ending power games between Belgrade and Pristina.

The latest row erupted when a passenger train painted in the colours of the Serbian flag and decorated with the slogan “Kosovo is Serbian” in 21 different languages, including Albanian, set off from Belgrade to the northern, Serb-run part of the Kosovo town of Mitrovica last Saturday.

Kosovo officials said it was a provocation and urged the EU to convince Belgrade to stop it.

A few hours later, the Serbian authorities stopped the train in Raska, in southern Serbia, just before the Kosovo border, and then Serbian Prime Minister Aleksandar Vucic dramatically accused the Pristina government of planning to blow up the railway line and sending special forces to attack the train.

Pristina denied that it intended to attack the train, but Serbs in Kosovo were unsettled by the stunt and its aftermath.

Gordana Djoric, a 58-year-old entrepreneur from the village of Laplje near Gracanica who runs a women’s business association called Avenija, said she was shocked by Belgrade’s decision to decorate the train as it did.

“I couldn’t believe that someone could have come up with such an idea. If they wanted to launch a new line from Mitrovica to Belgrade, they should have bought a nice train, with warm carriages and Internet available, so that young people and students could have the benefit of it,” Djoric told BIRN.

“But all those messages that ‘Kosovo is Serbia’, and demanding that this train come to Kosovo without any problems, I don’t know what kind of person could come up with such an idea,” she said.

While many agreed that a train connecting Belgrade and Mitrovica was needed, they argued that the Serbian authorities had made a mistake by using it for propaganda purposes.

“That train, the way it is, is not needed by anyone in Kosovo,” said Sanja Sovrlic, a Mitrovica-based journalist from TV Mir.

A day after the train’s aborted journey, Serbian President Tomislav Nikolic alarmed many in both Serbia and Kosovo when he announced after a National Security Council session that Belgrade was ready to send troops into Kosovo “if Serbs are being killed”.

“Kosovo Serbs are equal citizens of our republic. They do not need Belgrade’s protection… because they are not in any way in danger, nor will they be,” Mustafa said.

Lazic said that elsewhere in the world, trains and buses are used to connect people, but the opposite is the case for Serbs in Kosovo.

“Here nothing is normal, everything is political theatre, created equally by both governments, Serbia’s and Kosovo’s equally, and everything is done for political points on both sides, and we Serbs who live in Kosovo are the victims of it. We live in an open prison,” he said.

“That evening, I was planning to travel to Belgrade to see my grandchild, the plan was to take her here for couple of days, but after hearing the news, I gave up on my plans,” Djoric said, recalling the day of the controversial train journey.

“I was afraid that the worst was about to come and I didn’t want to abandon my place, I was worried what could be happening to my family, neighbours and everything. If something was happening, I’d feel very bad that I was not at home,” she added.

Djoric said she could see no reason for fomenting tensions with Pristina.

“This kind of tension only produces fear and a feeling of insecurity. We don’t know what to expect. We know we won’t be protected. It’s clear to us,” she added.

Lazic said Kosovo Serbs are in a perpetual state of trepidation about the future.

“We don’t know what tomorrow will brings,” he said. “We know that nobody will stand up for us, and that there are no political representatives that we believe in.”

Such feelings of uncertainty are not new however, Djoric said.

“This is our natural environment, we were born here, we’ve spent our whole life here, for us its not a problem to live here, the problem is that we don’t know what is going on around us, what these [government] policies mean and what will they bring to us. I’m saying this about the policies after the war but also before it,” she explained.

“We constantly live in fear of what these [policies] will bring us tomorrow,” she added.

“When Serbs hear about ROSU, they don’t feel pleasant. It produces tensions and fears. We know that these are units ready for anything. ROSU for us symbolises bad things, people were frightened,” said Dejan Nedeljkovic, a 34-year-old from Banjsko who is an NGO activist with the Green Srpska group.

Branislav Nesovic from Leposavic, a civil society activist with the New Social Initiative and a PhD candidate at Central European University, said fear had become a constant for two reasons.

“Lack of security in economic terms is something which produces huge anxiety among Kosovo Serbs, as well as integration into Kosovo’s institutions,” Nesovic told BIRN.

“They are also afraid about their future relations with Belgrade and Belgrade’s attitude towards Kosovo Serbs, as Kosovo Serbs depend on Belgrade - without Belgrade they can’t survive, especially financially, and this is a big worry,” he added.

Kosovo declared independence from Serbia in 2008, but Belgrade refuses to recognise its sovereignty.

Since the end of the Kosovo war in 1999, the Serb-dominated north has been beyond the control of the Pristina government, while Belgrade has continued to finance local security, judicial, health and educational institutions.

While a few Serbs living in southern parts of the country began cooperating with the Pristina authorities soon after Kosovo declared independence, the north came under Pristina’s partial control only after Kosovo and Serbia made their so-called ‘Brussels deal’ in April 2013 - an agreement on normalising relations which has yet to be fully implemented.

Jovana Radosavljevic, the executive director of the New Social Initiative NGO in Mitrovica, argued that the Serb community in the north was being misused for political purposes.

“The nationalist propaganda [on the train], even though it does reflect the sentiments of the majority of the Serb population, was provocative and contradicted all the progress that has been made in the past 17 years [since the war]. The local community didn’t ask for it, nobody asked for it,” Radosavljevic told BIRN.

“The reasoning why Serbian government went with this kind of decor is unclear, but it will definitely serve well for campaign purposes for the upcoming Serbian [presidential] elections,” she added.

Milica Andric, project manager at the Activ NGO in Mitrovica, argued that the tensions between Albanians and Serbs in Kosovo were not the result of bad relations between people, but the fault of politicians.

“It’s always about power games. We’re always the ones to be blamed for the Kosovo government’s unsuccessful policies and [always used] as a tool of the Serbian government to achieve its goals, especially in international negotiations,” Andric said.

Nesovic also said he believes that tensions are being manufactured for political motives.

“Our societies have been very divided over the last 17 years, therefore our contacts are not very frequent. On the other hand, the conflicts are very often exaggerated, politicians misuse different situations to score their point, but they need to be aware of consequences these moves can produce,” he said.

Sovrlic pointed out meanwhile that most Kosovo Serbs simply want to enjoy a peaceful existence.

“People in Kosovo do not want conflicts, but the same things as everyone in the world - to live in peace in their homes, to have decent salaries and to live normally,” she said.