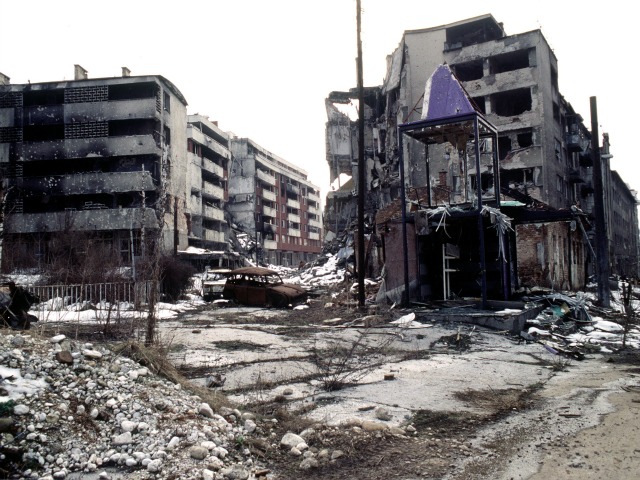 Wartime Sarajevo-based correspondent Kevin Sullivan’s new novel The Longest Winter tries to reflect the humanity and courage of people living in the Bosnian capital during the 1992-95 siege.

In Kevin Sullivan’s living room, there is a framed photograph of himself lying in a debris-strewn road in central Bosnia, having just driven over a landmine.

On the left of the shot is a Reuters vehicle; and Sullivan lies, dazed, to the right – just a metre from another unexploded mine.

It’s an odd memento, but it marks an important event in Sullivan’s life that links that day in January 1993 to today’s Sarajevo launch of his novel The Longest Winter.

One of 11 novels written by Sullivan, who now lives in Sarajevo, this one is particularly important – a “labour of love”, he says, that he hopes his 17-year-old daughter will turn to if she ever wishes to learn about her parents’ experience of the war.

“It is my testament of our experience for her one day, if she ever wants to read it,” he says.

Sullivan, then a foreign correspondent, spent time in Bosnia in 1992 and 1993 reporting for the newswire United Press International, UPI.

The mine accident changed the course of his war. Flown out for medical care by the RAF – and acutely aware of how privileged he was as a foreigner compared with Bosnians trapped in the conflict – he spent three months away.

It was in hospital in Glasgow as he recuperated that Sullivan began a first draft – at that time full of immediate reportage, and raw with horror and an eyewitness’s outrage at what was happening in the besieged city of Sarajevo.

When he returned three months later, inspired by a sense of solidarity with the city’s residents as well as the fact he had started dating Marija, who is now his wife, staff at Split airport took one look at his crutches and refused to let him on the plane - “but they finally gave in”.

Back in the western suburb of Alipasino Polje with Marija and her mother and brother, he learned what it was like not to be the empowered foreigner but the man who could not walk properly and needed to be brought coffee.

He finished the first draft of the novel there, relying on a friend’s sister, a nurse, to remove his final stitches in the living room.

But the book, which took more than 20 years to finish, was something Sullivan came back to again and again over the years and amid his travels to other postings, as he redrafted and refined it.

Today, the softly-spoken Glasgow-born writer says ahead of the Thursday-evening Sarajevo launch of the novel that the final product is a “more considered” version.

It has more fully-drawn characters, and explores the theme of what he calls “the extraordinary dignity and decency” of ordinary people who suffered during the 1992-95 conflict.

“That’s something that has been buried under a blanket of cynicism in the last 20 years, and I’ve actually watched that being dismantled and denigrated,” he says.

But the solidarity of the people of Sarajevo was “no myth”, he insists with emphasis, and belies the narrative of ethnic division that was imposed on the conflict from the beginning.

Despite the reality of a number of “monsters” doing terrible things, “in ’92 and ’93, every second person you met was saying ‘We can live together’ and ‘I don’t hate anybody and I refuse to fall into the trap of being bitter’, and so on,” he says.

“Very often the people who were saying those things were not necessarily well-educated university professors or politicians, they were just ordinary people who asserted a sort of common-sense decency where people really quietly, courageously helped their neighbours.”

The novel follows three main characters against the backdrop of two real-life events: the assassination of a government minister, and a fierce battle in the winter of 1992 in nearby Otes, in which Sarajevo’s defenders fought to repel Bosnian Serb forces advancing on the city.

Terry, a British doctor, arrives unprepared for a harrowing mission, shaking with fear as her transport careens into the city in a hail of gunfire.

Brad, an American journalist, is trying to salvage a reputation that was damaged on his previous job.

Milena, a young woman from eastern Bosnia who has fled her home and her husband, now works in a Sarajevo bar frequented by “men who like killing”.

The narrative brings the three together in a quest to save a seriously ill boy.

In one of Milena’s early scenes, she plays the piano in a borrowed apartment in a western suburb as the snow falls outside – one of the kind of everyday, humanising moments that Sullivan was unable to use for his news reports as a foreign correspondent during the war.

“Oddly enough you can come closer to the truth in certain ways through fiction than through fact,” he says, explaining that his journalistic bulletins often featured the numbers of casualties and shells fired into the city each day.

One of the reasons, he says, is that you simply have more space in a novel.

“The other is that, being a reporter, you’ll be in situations where you are reporting something and, at the same time, what really gets you is that you were sitting with these people drinking coffee and smoking cigarettes, and one of them said this incredibly funny thing that was also very sad,” he explains.

Sullivan also cites a children’s singing competition that left him “emotionally affected” at the time, since it was emblematic of ordinary people’s will to keep functioning despite fears that the event could be targeted.

When asked if he is nervous about the book’s reception in Bosnia, where feelings about the war still run high, Sullivan is careful to point out that his novel represents his own view as an outsider.

Rather than pretending to represent everybody’s experience, he says, it is his own, and is “partisan to the people of Sarajevo” – including all the Serbs, Croats and Bosnian Muslims who suffered together in the siege – since it would have been impossible to spend so much time in the city and not identify with them.

Sarajevo is still a special place to Sullivan.

He returned after eight years spent in Singapore and Spain to take a job in 2001 in the office of the High Representative to Bosnia – the international official responsible for overseeing implementation of the Dayton Agreement that ended the war.

He is now communications manager for the International Commission on Missing Persons, founded in 1996.

“I always thought that this is a country that can succeed, that can prosper and be secure and can deliver a decent standard of living to its residents,” he says – a goal that has been hampered by the replacement of a discourse of inclusivity with a simpler narrative and the rise of chauvinism.

Unfortunately over the past 25 years, “the weight of disappointment has been such as to almost invalidate” the stand that Sarajevo people took in solidarity in the face of aggression; and today, “the country is more divided than it was”.

But, he adds, “If this book can be a small contribution, it will I hope be to describe to people – in case it has been forgotten – that there was a time when, in the greatest difficulty, citizens articulated decency, self-respect, generosity, and common sense.

“And from my point of view as an outsider, that remains enormously impressive.”

‘The Longest Winter’ is published by Twenty7 and available in English now. It will be available in local language from December from bookshops in Sarajevo and elsewhere in the region.