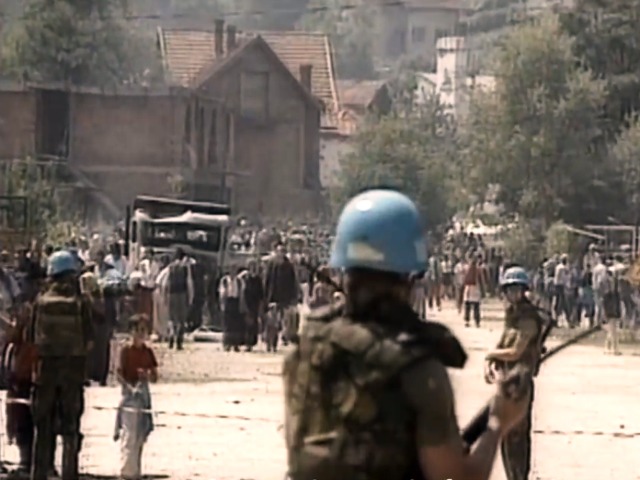 War victims are launching an appeal in The Hague, calling for the Netherlands to be held responsible for the deaths of all the Bosniaks from Srebrenica who were killed in July 1995.

The Mothers of Srebrenica and Zepa Enclaves victims’ group will launch an appeal on Thursday in The Hague against a 2014 verdict which held the Netherlands responsible for the deaths of about 300 Bosniaks after the fall of Srebrenica. The district court in The Hague ruled in July 2014 that Dutch peacekeeping troops had failed to protect the 300 Bosniaks after Srebrenica fell to the Bosnian Serb Army on July 11, 1995, and ordered the Netherlands to pay compensation. But Marco Gerritsen, the lawyer for the Mothers of Srebrenica and Zepa Enclaves association, told BIRN that the Netherlands should be found guilty of responsibility for the deaths of all the Bosniaks from Srebrenica who were killed after the enclave fell - more than 7,000 men and boys. “It is important to determine the responsibility of the Netherlands. In fact, we have evidence that confirms that the United Nations forces wanted the Dutch soldiers to stay and protect Bosniaks in Srebrenica, but representatives of the Dutch defence ministry ordered their soldiers to leave the enclave,” Gerritsen said. The Dutch defence ministry also plans to appeal against the verdict on Thursday. After Srebrenica was overrun by Serb forces, many Bosniak men and boys tried to escape through the woods while others headed for the nearby UN peacekeepers’ base at Potocari, where the Dutch battalion (known as ‘Dutchbat’) was stationed. Several hundred men managed to get inside the Potocari base, but were told by the Dutch troops that they would be safe outside and were handed over to Bosnian Serb troops and police, who later killed them. The 2014 verdict said that on the night of July 12, 1995 or the morning of July 13, the Dutch authorities “knew or should have known” that there was a possibility that the Bosniaks would be killed, so they were found guilty of the deaths of about 300 people who were handed over from that moment onwards. But the verdict acquitted the Netherlands was acquitted of responsibility for the deaths of Bosniaks who had been handed over to Serb policemen and soldiers prior to that. Gerristen told BIRN that during the appeal he would present a document dated July 11, in which the Dutch defence minister said he was afraid for the safety of the Bosniaks. “Therefore, there is a responsibility of the Netherlands for the death of all Bosniaks whom they handed over,” Gerritsen said. He alleged that the Dutch authorities were only concerned about the safety of their own soldiers, so “many civilians got killed” thanks to the hurried departure of the Dutch soldiers and the handover of the Bosniaks. A delegation from the Mothers of Srebrenica and Zepa Enclaves victims’ group will attend the presentation of the appeals in The Hague on Thursday.  Munira Subasic, the president of the group, said she hoped that the Netherlands would be found guilty of the death of “each man and each child”. “You cannot tell a mother that somebody is guilty of her son’s death and then tell another mother that they are not guilty of her son's death as well. We shall fight for justice and truth for as long as we live,” Subasic said.