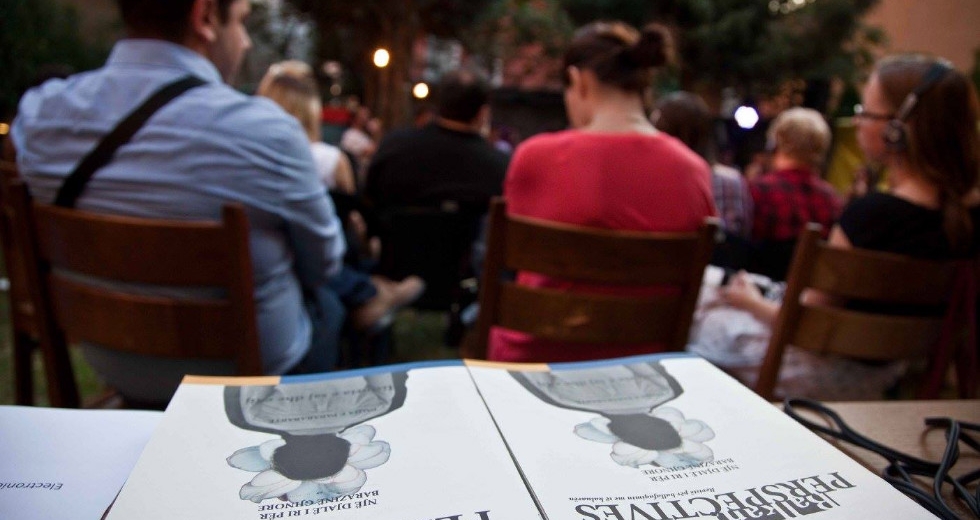 HER- AND HIS- STORY DISCUSSED IN SMALL TALK

When reflecting upon the Kosovo war of 1998-9, men are often portrayed as heroes, while women are reduced to victims; despite roles as leaders, fighters and activists, women remain excluded from the broader narrative, while the reality of men as victims is rarely acknowledged. These perceptions have in recent years been challenged more openly within Kosovo society following a number of initiatives from citizens, and were the subject of an open discussion held on Thursday in K2.0’s garden.

This Small Talk discussion was organized by K2.0 and forumZFD, and also marked the launch of forumZFD’s new Balkan.Perspectives print edition “Gender and Dealing with the Past.” Addressing the issue were women’s rights activist, Nazlie Bala; member of the National Council for the Survivors of the Victims of Sexual Violence and legal advisor to the minister of justice, Dafina Buqaj; and activist and director of the active citizenship NGO EC Ma Ndryshe, Hajrulla Ceku. The discussion was moderated by K2.0 Editor-in-Chief Besa Luci.

Speaking first, Bala highlighted the lack of progress in helping survivors of conflict-related sexual violence (CRSV) committed during the war, and placed much of the blame upon government institutions. In 2014, after years of debate within government and society — a delay which she called “a joke” — survivors of CRSV were included in the law providing social benefits to veterans and civilian victims; however, still “nothing has been done” and survivors continue to be neglected by institutions. Although an independent Commission has since been announced to verify the status of both veterans and survivors of CRSV, Bala argued that it provides an excuse for further delay while all cases are considered, effectively bringing survivors back to square one.

She added that although laws exist protecting women’s rights, they are not being implemented; for instance, women remain underrepresented in government institutions. The implications for Kosovar society are of concern to everyone: To really see the past, she argued, we must deal with the prejudices of the present.

Speaking next, Bucaj argued that ‘women’s rights’ as a concept is misunderstood and can marginalize women; she prefers the term ‘gender equality.’ On the perception of women as victims, she added that society should instead focus on women’s roles as heroes during the war. She attributed the delay in getting agreement on compensation for CRSV survivors to tradition within Kosovar society, but believes that Kosovo has now taken a step forward, allowing for greater support for survivors.

Addressing criticism over institutional delays, she spoke of budget constraints, referencing the year-long negotiations between the Ministry of Justice and Ministry of Finance on the issue of compensation for survivors of CRSV, while making clear that this could not justify a lack of coordination between institutions. There are also problems in building legal cases due to both unwillingness of survivors to revisit their experiences, and, where perpetrators were Serbian citizens, Serbia’s refusal to extradite citizens for trial.

Questioning whether society has been ready to deal with the past, she pointed out that until recently post-conflict initiatives have often come from the international community; more recent initiatives have come from locals, suggesting greater progress may now be possible.

Ceku stressed that our perception “starts and ends with language.” On rare occasions when CRSV towards men is discussed, it is referred to as ‘torture,’ which is not generally the case when discussing violence towards women. CRSV is usually thought of as being carried out by a man against a woman, he suggested, which exacerbates the idea of women as victims; violence against men is no different to violence against women and treating sexual violence as a human rights issue should not allow for this distinction. He also added that the motivation is not desire, but power and dominance.

Illustrating his point that war cannot be separated from gender, he explained that “masculinity is taught in the military”; the aim is to ‘feminise’ the opponent, stripping away the masculine quality of security — a man who cannot defend himself cannot defend his family or fulfil his expected duty to fight in war.

Following these remarks the floor was opened to comments and debate.

The portrayal of women only as victims of CRSV, ignoring the many roles undertaken by women, was discussed. Buqaj mentioned women’s role as mothers while men were fighting; this sparked a comment from the floor that women should not be discussed as heroes because of motherhood, but in terms of their humanity — a father in that situation would also be heroic — and that focusing on motherhood reinforces the ‘women as victim’ idea.

Women’s roles as activists and fighters were also mentioned, with Bala arguing that despite the role of women before, during and after the war, war itself is seen as a man’s fight, and so women are sidelined, with the door closed to further consideration.

Discussion on lack of support for survivors first focused on the necessity of obtaining an accurate number of survivors to aid understanding; one contributor noted that the accepted figure of 20,000 has no factual basis, and that people don’t trust institutions enough to come forward.

Another contributor argued that it is too late: Many survivors are unwilling to discuss their experience after such a long time because they now have families who may not be aware of it. Others talked of women who were divorced when their husbands discovered they were raped during the war.

Many said that survivors often feel ashamed or at fault; children conceived during rape are sometimes referred to as ‘children of shame,’ which stigmatizes survivors.

A journalism students at the discussion said that families often don’t want to discuss rape. “We as a society don’t want to acknowledge it, blaming and shaming those who come forward. We must accept that these prejudices exist, and families should be supported in understanding how to approach the issue,” she said.

A child herself during the war, she later heard family members discussing rape survivors without herself having any understanding of what this meant. Suggesting a generational shift in attitudes, she noted that while students at university are now more likely to talk about men when discussing sexual violence, this is rare within the faculty.

Another contributor, a psychologist, argued that neither individuals nor society can move forward while such traumatic events are “swept under the carpet.”

One said that people accept that the stigma exists but do nothing to fight it; that in order to move forward, a space in society needs to be created that challenges the culture of blaming survivors.

Bala also argued that the purpose of CRSV differs to sexual violence during peacetime due to its role in ethnic cleansing, through either pregnancy or terrorizing people enough to force them to flee the area. Bucaj added that cases of rape were heard at the Hague tribunal investigating war crimes during the conflict in Bosnia.

One contributor said that widespread use of CRSV during the wars in former Yugoslavia needs further study, arguing that it is more common in more patriarchal societies; where women are viewed as the property of men, taking a woman’s ‘honor’ is a way of attacking her husband or father. She added that this is difficult to face because this mentality persists today.

Following the two-hour debate, informal discussions continued around the K2.0 garden before music by DJ Oda brought the evening to a close.