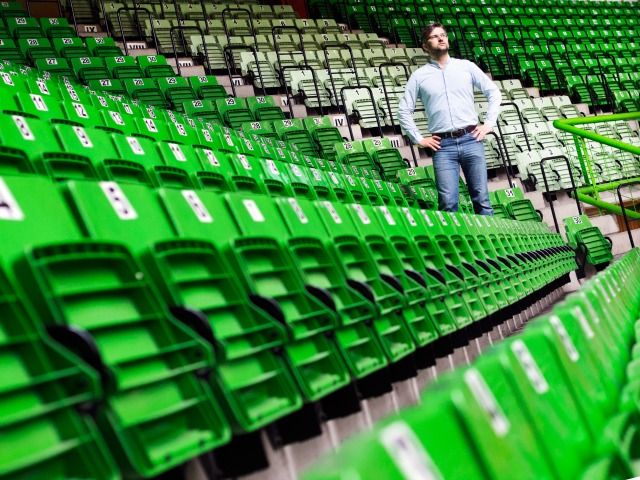 People’s memories of a huge anti-war concert in Sarajevo in 1991 are being collected for a project which also acts as a warning about the dangers of nationalism in contemporary Europe, its creator says.

When the war in the former Yugoslavia started in 1991, 14-year-old Serb Danijel Visevic was a thousand miles away in the German city of Frankfurt - listening to Guns N’ Roses, Die Ärzte and Nirvana and being in love with his classmate Nina, not aware of anything what was happening in his parents’ homeland.

Today, Visevic is a German journalist and the creator of Project Zetra, which aims to find people who went to the biggest Yugoslav anti-war rock concert at Sarajevo’s Zetra Olympic Sports Hall on July 28, 1991, in order to collect their stories 25 years later and try to answer the question: “Why did a war that no one wanted break out?”

Visevic accidentally found out about the Zetra concert while randomly wandering YouTube searching for Yugoslav rock songs, drinking wine and celebrating finishing his novel which also deals with experiences of the war.

“But I ran into this concert accidentally and remained absolutely astonished and the same time annoyed that I did not even know that it happened and that people were opposed to the war,” Visevic told BIRN.

“That concert reversed my view about the war and about Balkan people 180 degrees... I had the typical Western view of the war and was influenced by the stereotype that the Yugoslav nations just waited for Tito to die so they could kill each other… but the concert and many other group and individual actions showed me it is not true,” he said.

The concert was organised and broadcast by the Yugoslav television station Yutel under the banner ‘Yutel for Peace’.

It was the culmination of peace protests in Yugoslavia uniting activists from all over the country with popular rock bands in a collective effort to prevent the war.

“For a war, you need a small number of extremists who are able to create an incident, a powerful politician who plays the nationalist card while being willing to instrumentalise hatred for his own interests. The experience of these people we talked to is essential not only for the Balkans, but for Europe also,” Visevic argued.

Visevic and 11 colleagues, mostly Germans, created the Zetra Project as an online space where the spectators, musicians and the organisers of the 1991 concert can meet again in order to establish a collective memory and share their views on the war a quarter of a century later.

So far, more than 50 people have shared their stories, among them 46-year-old Alma Suman, who described how people at the time were completely confident that common sense would eventually prevail.

“I felt as if I was being kicked out of my life and slotted into a film. First carefree and cheerful partying with friends, and next you’re standing stand in front of soldiers who are terrorising you,” Suman told Visevic in an interview for the Zetra Project.

“No one had to convince me that everything will be fine, I was convinced by myself. The only question I asked all the time was ‘when we will finally go to the seaside?’” Suman recalls.

In May 1992, she swapped Sarajevo for London to work as an au pair and upgrade her English language skills. A few months later she moved to Vienna, where she stayed until 1997, when she decided to return to Sarajevo when she was eight months’ pregnant in order for her son to be born in her homeland.

“My fairy tale was destroyed. For this reason I do not want young people’s fairy tale to be destroyed as well. We are obliged to help our children to live a life free of nationalist ideological poisoning,” she said.

Visevic said that it was not hard to find people to talk about their memories, but the recollection was traumatic for many of them.

“These are all personal and upsetting stories, people do not sleep at night because the memory awakens them after our conversations,” he explained.

Although heavy rain was falling on the day of the concert, some 30,000 people massed inside the Zetra Olympic Sports Hall on July 28, 1991, while another 50,000 gathered outside to hear the show.

Maja Jusufbegovic was only 13 years back then. However, her parents allowed her to travel 200 kilometres by bus to attend the concert.

Today, she is still wondering in disbelief how the politicians could remain deaf to their pleas for peace.

“How is it possible that no one has heard such a mass of people? To this day I do not understand how we could allow ourselves to be divided. The people I loved before the war, I love them today, too. No war can change that,” Jusufbegovic said.

Some of the Sarajevo peace protests and the Zetra Sports Hall were among the first targets for the sniper fire and shelling of the Bosnian war in 1992.

Before the war, 64-year-old Milan Trivic worked for Yutel, the last news program in the former Yugoslavia. Along with a group of Sarajevo rockers, he initiated the idea of the ‘Yutel for Peace’ concert.

His memories confirm the dominant feeling of that time that no one could be mad enough to lead the country into hell.

“Even when the shooting began, I was saying, ‘This will pass in 15 days.’ Then later I thought Europe would not allow a war in the late 20th century. Unfortunately, those were all disappointments,” Trivic said in an interview for the Zetra Project.

“Today I know that war can be created in a second in every country in the world, as long as you have a sufficient number of fools. Destruction is much easier than construction. Peace is painstakingly built. But it can be torn down very, very easily,” he added.

A warning for Europe

Visevic says that The Zetra Project should remind us of the fragility of peace in the face of the destructive forces of nationalism and intolerance which are on the rise in all European countries these days.

“Even in Germany we are facing the Alternative for Deutschland, AFD, whose nationalistic and anti-refugee rhetoric is full of hatred and really upsets me. Many people I talked to told me that the late eighties in Yugoslavia seems similar to today’s Europe,” Visevic said.

“That is why I think that this is the perfect time to listen to all these people,” he concluded.