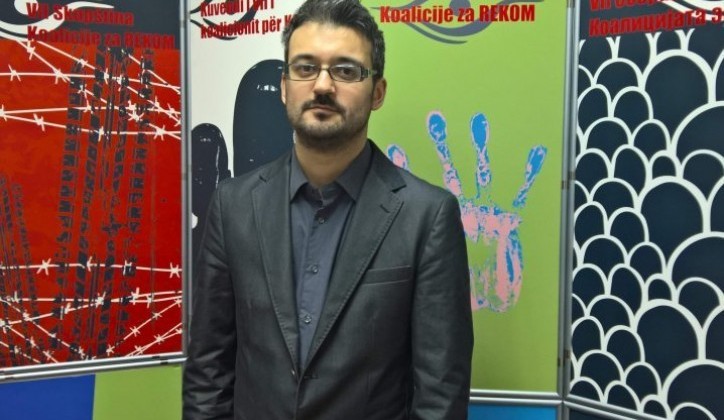 Speech of future President of Serbia in Srebrenica on July 11th

The speech of a future President of Serbia at one of the future events organized to mark the anniversary of the Srebrenica genocide in Potočari.

Too many years have passed for us to continue to remain silent, too many facts have been established for us to keep denying them, too many tears have been cried to keep pretending that we do not notice the pain of the mothers, sisters, daughters, fathers, brothers and sons who lost their closest family members in Podrinje in July 1995 following the fall of Srebrenica.

I have come here today to assure you that we are done with denying what happened then. I have come here to take responsibility as the President of Serbia on behalf of my predecessors from the governing structures in Serbia and their allies, who led the Serbian people in Bosnia and Herzegovina during and after the war. I stand before you a humble man and I honestly apologize for the atrocities committed by those who had planned, organized and committed the crime, but also on behalf of those who concealed, denied or even approved of the crime.

What is it that we know today beyond any doubt and, more importantly, what is it that we accept about the events of July 1995? We know that Ratko Mladić’s army entered Srebrenica, we know that men who took refuge here in Potočari were separated from the women and children, and we know and we accept that most of them were transferred to Bratunac and then to Zvornik, although some had already been killed. We know that during the days in question there was no discussion about whether, but only about where to kill the detained boys and men, and we know that eight thousand of them were executed in cold blood over a period of only a few days in a perfectly organized killing factory. We know and we accept that not a single boy, young man or adult man detained was spared. None! Their bodies were immediately buried. Everything had been prepared in advance for the burial. At the same time, all other civilians were forcibly removed. Only a few days after Mladić’s army entered Srebrenica, no Bosniak was left in Srebrenica. We know this and we accept it.

All these facts have been established thanks to the criminal investigation, the evidence presented before the courts and the conclusions reached by the trial chambers. Two international courts have qualified the events in and around Srebrenica in July 1995 as genocide. We do not have the right to change this or to call it some other name. Unlike my predecessors leading the Republic of Serbia, I want to state loud and clear that the government and citizens that I represent accept the findings of these courts. On their behalf I state here today – Yes, genocide was committed in Srebrenica in July 1995.

This does not mean that the Serbian people are genocidal, as revisionists will certainly attempt to present it. Quite the contrary! The acceptance of responsibility for the crimes committed by our predecessors will remove the stigma of the Serbian people being criminals. The ones who committed the genocide are genocidal and not their fellow citizens. Those who still support individuals who committed genocide are also genocidal. I assure you that we will take all necessary measures to have as few of such people in Serbia and in the Serbian nation as possible.

The facts about Srebrenica and the war in Bosnia and Herzegovina will not be ignored in the school books, public documents and actions of Serbian state officials. Such comportments will not happen anywhere or in anything under the control of the Serbian government. We will inform those who still do not know, we will convince those who do not accept, and we will silence those who approve of the Srebrenica genocide. Students in Serbia will know by the time they complete high school every detail about the Srebrenica genocide – from textbooks, their teachers and through school excursions to the Memorial Centre, where we stand today.

Our students must know that Srebrenica did not happen by accident, but was rather as the result and only possible outcome of the general wartime policy of Serbia and the Republic of Srpska over the period 1992-1995 in Bosnia and Herzegovina. The Serbs did not want only Srebrenica nor was Srebrenica the only place where they committed a crime. The objective was to take the entire region of Podrinje and Bosanska Krajina, to divide Sarajevo, to set up the border of the imaginary Serbian state on the Una and Neretva rivers and to erase the one existing on the River Drina. What makes it even worse is the fact that the objective was to create an ethnically clean imaginary Serbian state in Bosnia and Herzegovina, to have Serbs in control of this state and to have only Serbs living in it. All those who were found to be in the way of this plan were either killed, imprisoned, raped or otherwise persecuted. Finally, the objective was to one day incorporate such a state into a Greater Serbia.

Today I want to assure you that I will do everything I can to eradicate even the smallest dream of a Greater Serbia in the country of which I am the leader, because every dream of this sort leads to crimes and ethnic cleansing. This is why I send a message to our fellow citizens in the Republic of Srpska: the only path of true cooperation leads through the building of a united multinational state of Bosnia and Herzegovina, based on the rule of law.

Yes, it is true that Serbs were also killed in Podrinje and throughout Bosnia and Herzegovina. Civilians in Serbian villages were also killed during the war. And we must speak of their sufferings as well and about the sufferings of Croats, and we must do our best to clarify their fates, and to identify and punish the perpetrators. The crimes committed against Serbs in Bosnia and Herzegovina, however, cannot and must not be a justification for a campaign of violence against non-Serbs.
With this regard, I do not want to remain vague about the role of Serbia in the Srebrenica genocide and the war in Bosnia and Herzegovina. Its role was shameful and the responsibility enormous. The war was initiated and led from Belgrade, the weapons and ammunition used to kill victims in Srebrenica and elsewhere arrived from Serbia, the salaries given to those who planned, organized and perpetrated the Srebrenica genocide and other crimes committed against non-Serb populations throughout the entire war in Bosnia and Herzegovina came from Belgrade, our troops came to help, they participated in the commission of crimes in many towns and villages of Bosnia and Herzegovina and even in the executions of the detained men from Srebrenica. We reject such a policy with disgust and we are resolved to cease protecting and justifying those of our predecessors who implemented such a policy.

I am looking you in the eyes and promise that our government authorities will do everything to prosecute every single individual suspected of committing war crimes found on the territory of Serbia, or to extradite him or her to Bosnia and Herzegovina. Serbia will no longer be a shelter for those who soiled its name by doing harm to others.

Dear Bosniak brothers, do not dream of revenge. I stand before you and I beg for your forgiveness. I beg you to accept my apology. Let us once and for all stop this vicious circle of violence, which has caused so much harm and pain throughout our history, and which has brought the region in which we all live to the edge of misery and despair. We have been unable to move from this point for years. And this is not because we are incapable, uneducated or lazy, but rather because we are disunited and burdened by constant disagreements between ourselves. Because we are still living the wartime reality so many years after the end of the war. Such a situation is unsustainable; and the irresponsibility of state officials after the war in the region is – unforgivable. I only have one dream. And that is to make this speech of mine, delivered here before you today, the first step on the path of the moral and general repair and renewal of our relations. That is why I beg you to accept my words. That is why I beg you today for your forgiveness. Without reconciliation, the victims will not be able to rest in peace. Nor will we be able to live in peace without reconciliation.

Let Srebrenica never be repeated, and let the war between our peoples never be repeated. Let us put an end once and for all to spats and conflicts between out nations! It is our obligation towards the Srebrenica victims and all other victims to establish a permanent peace, just as it is our obligation towards those born after the events in Srebrenica, who live with us and who will continue to live with one another here after we are gone.

The author was a long-term reporter for the Sense news agency at the International Criminal Tribunal for the Former Yugoslavia in The Hague, and today he is a researcher in the Humanitarian Law Center.

Originally published on July 10 2016 at: www.pescanik.net.