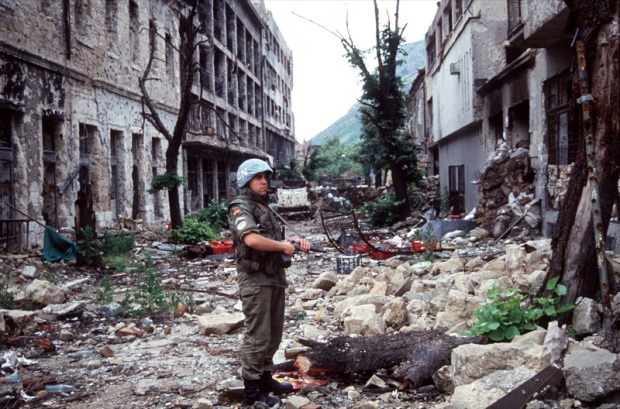 THE POLITICAL PARTICIPATION OF WOMEN IN POST-CONFLICT BOSNIA AND HERZEGOVINA

I was 26 and had just finished university when the war broke out. I vividly remember my terror, alone in my apartment, when the shelling started. I witnessed first hand the horror of war.

My personal experience as a survivor of the Balkans war and my continuing concern for the welfare of women in post-conflict situations lead me to my PhD research . My project is a comparative analysis of the impact of the Good Friday Peace Agreement (1998) and the Dayton Peace Agreement (1995) on the political participation of women in the post-conflict societies of Northern Ireland and Bosnia and Herzegovina.

After the initial shock, I started working in the local children’s aid organisation, distributing aid to children across the lines of division in my hometown of Mostar, in Bosnia and Herzegovina. Since the end of the war, I have been either learning about, or working towards improving the lives of women and girls in the countries affected by war and disasters.

While undertaking a Master’s degree in Development Studies, my thesis centred on the integration of Bosnian women refugees into three European countries: Ireland, Norway and Sweden. I focused on a comparative analysis of refugee laws and policies in those countries and their ability to provide services for refugees. The research gave me an insight into refugees’ own experiences of integration and the difficulties they were faced with in this process. My first project looked at women who were forced to leave their homes and their country as a result of the violent conflict in Bosnia and Herzegovina but I always felt that it was equally important to answer the question of what happened to the women who remained.

What are power-sharing agreements, and where are the women?

International norms on democracy and women’s rights agree that the presence of women in political institutions, as well as their participation in peace processes and post-conflict reconstruction is undoubtedly important. Two of the most celebrated power-sharing peace settlements in history, are the Dayton Peace Agreement that administratively determined today’s Bosnia and Herzegovina, and the Good Friday Peace Agreement, that ended a long running low-level conflict in Northern Ireland. These agreements have had varying impacts on the space available for women’s political participation.

Both countries are still deeply divided post-conflict societies and they both have peace agreements based on principles of power-sharing. So why, then, is the political position of women in post-Dayton Bosnia and Herzegovina weaker than that of women in post-Good Friday Agreement Northern Ireland?

In order to answer this question we should perhaps explain what power-sharing peace agreements are. These types of arrangements are also referred to as consociational peace agreements and they are becoming the international community’s, and the UN’s in particular, preferred solution for ending civil wars through peace negotiations as well as the main tool for building durable peace and democracy in war-torn and divided societies. The main tenets of consociational arrangements are: institutional representation for all significant groups, cross-community executive power-sharing, mutual veto powers in order to protect group’s vital interests and a high degree of autonomy for each community. Although these types of peace agreements are implemented and positively accepted around the globe, women are often ill-served by such settlements. Ethnicity and nationality lead consociational considerations and thus, considerations of gender equality suffer.

The Dayton Agreement and the Good Friday Agreement: Differences and Similarities

The Dayton Agreement and the Good Friday Agreement are inarguably similar, but also unique in their own right. Both agreements are power-sharing arrangements between communities that are still divided. Moreover, they are similar in that were brokered under the influence and active participation of the international community, during the same US administration. Despite these similarities, there is a significant difference in the form of power-sharing arrangements contained in the agreements. They also differ in the outcome for women, with the political position of women in Bosnia and Herzegovina being weaker than that of women in Northern Ireland.

The Dayton Peace Agreement, which stopped the three-year long conflict in Bosnia and Herzegovina, is often described in academic literature as the new ‘social contract’ that was to set the standards for post-conflict societies. This peace agreement however, gave insufficient attention to women’s political rights. Further, since there was a complete absence of women in the peace process, it became a ‘dialogue of men’ which in turn created a conservative backlash and became a characteristic of women’s post-conflict experience in Bosnia and Herzegovina.

The women of Bosnia and Herzegovina, in the course of the twentieth century, have lived under six very different political systems, including two different kingdoms, two major wars, a socialist political system and a transitional democracy. Each of them developed its own notion of gender relations. Very few political systems include women in their apparatus, especially beyond the minimal numbers. First multi-party elections in many post-socialist societies in Europe manifested itself in a considerable reduction in number of women in parliament. The post-socialist states that emerged from the former Yugoslavia are certainly not an exception. The socialist’s one party rule in Yugoslavia had at least some egalitarian idea in relation to the inclusion of women in the political sphere, on principle, if nothing else. But amongst the nationalist parties in the former Yugoslav republics, there is not even an abstract egalitarian idea with regards to women and their political representation. The nationalist leaders of these former socialist states believe women should be seen but not heard, as the saying goes.

Women, who have during the conflict held a family and very often whole communities together, taking full responsibility for their survival and integrity, are very often left out in the processes of post-conflict economic, political and social reconstruction. While these processes are going on in their absence, and decisions are being made by their male national political leaders and in the presence of the international community representatives, women are told to go back to their ‘normal’ lives and activities. This has been especially evident in Bosnia and Herzegovina.

This has real-life implications for women in the political sphere today. So women’s participation in decision making bodies in Bosnia and Herzegovina went from having a female Prime Minister of Socialist Federative Republic of Yugoslavia in 1983 to not having one single female minister in 2008. The post peace agreement elections in Bosnia and Herzegovina had a near catastrophic result for women’s representation in the parliament and went from zero women representatives in the 1996 and 1998 elections to 7.14% in the 2000 general elections. The two following elections, in 2002 and 2006 had the same percentage of 14.29% of elected women parliamentarians, while elections in 2010, showed a slight increase to 16.67%. In the last general elections in 2014, women numbered 21.40% of representatives to the parliament of Bosnia and Herzegovina.

In the end, although it may seem that there are no implications that these two conflicts and their consequences are directly comparable, there are many theoretical similarities in the manner individuals, especially women, respond to their impacts and how they observe their place in the post-conflict setting. That being said, in relation to peace settlements, the Dayton Peace Agreement was less successful, since it reinforced patriarchal relations of power and traditional gender roles in this society through the subjugation of women. Considering that societies who fail to incorporate gender equality in all segments of its public and private spheres are likely to be submerged into a conflict, the gender blindness of the Dayton Peace Agreement can have extremely negative consequences for this still divided society.

With my research I hope to compare the routes to political office of women and the experience of women politicians, candidates and political activists in Bosnia and Herzegovina and Northern Ireland. Through this research, I also aim to contribute to a discussion on the reforms necessary to implement gender equality in political representation in these states and to contribute to the wider discussion on integrating gender equality into consociational peace agreements.