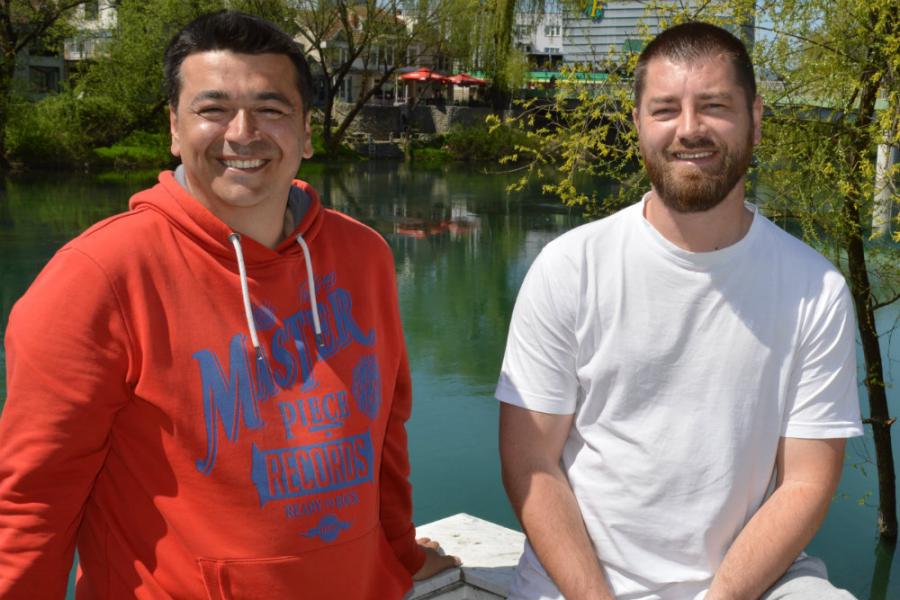 Omanović: My life from hate to peace building

When they started building peace 11 years ago in a still vulnerable environment, which Sanski Most truly was after a difficult and bloody war, Vahidin Omanović and Mevludin Rahmanović did not even dream that their Peace Building Centre would soon not only extend beyond local and regional borders, but also become a globally known and recognised organisation. This is also supported by two important international awards they received so far and the third one they are supposed to receive this summer. Being war victims themselves and forced to leave their homes, having been internally displaced throughout Bosnia and Herzegovina, they first had to find peace in themselves. The fact that they graduated from a religious school (madrasa) and became imams helped them in this, so that for a while they served God and believers.

„During all these war and post-war years I had only been a refugee and newcomer, so that I felt the urge for revenge. I hated the Serbs, and then I met Vahidin, who presented himself as a peace builder. Since both of us are imams, we were sitting and talking, searching for answers as to how to reconcile the spiritual and worldly side of perception of peace. It was precisely the religion that was my greatest driver and greatest source of peace building. I consider this to be my life mission – both as an imam and as a Muslim and a believer. I simply do not see myself in anything else, and whatever I do, I will promote this“, Mevludin starts his story.

„My dream was to work at a congregation, a džemat and help people in their daily lives, but then the war happened and the experiences I lived made me start hating Serbs so much that I could not stand being with them in the same room. Everything was like this until I visited a seminar about peace building and non-violent conflict resolution. At that moment I understood that I no longer wished to be taken to a concentration camp nor to ever take anyone to a concentration camp. And then I met Mevludin“, Vahidin adds.

Young people started coming to the Peace Building Centre, and with them also foreign volunteers. However, the local community was suspicious. They remember being called ''money launderers'', Jehova's witnesses, CIA agents, Wahhabies, etc. Secondary school professors were dissuading parents from even sending children to the centre, but the two and their colleagues were patiently building the association and building peace.

''Today we have a situation in which these very same professors invite us to come and see them, to discuss what we can offer them, to include classes and schools. They even invited us to work with the 'worst class' to work with those students in order to show what we can achieve with them through non-violent communication workshops. The local community or religious communities call us. We have a choir that sings the songs of all traditions and cultures, we have even held concerts at churches'', says Mevludin.

However, there were not really any songs in their daily activities. The key goal was to attract persons from different communities, from the former warring parties, to make them sit one across the other and start talking.

''They were only supposed to sit down and discuss what happened to them during the war, to sincerely talk about their experiences, because for them this is a way to tell each other both how they felt and what kind of experience it was for them,  and to discuss the consequences of that experience. I would especially like to stress the Peace Camp Programme, which is specific, because we are using seven days for people to come, learn about themselves, their culture and religion, and therefore also the religion and culture of the persons they live with“, explains Vahidin.

''As little as it takes for war, as little it takes for peace. Everything needs to be told through personal experiences. Not through the viewpoint of family or people, but based on personal stories. That is the only way to overcome all of it in a healthy way. It is neither simple nor unimportant, since, in order to build peace, every Bosniak needs a Serb and a Croat, every Serb needs a Croat and a Bosniak, and every Croat needs a Bosniak and a Serb. And the circle continues'', says Mevludin.

THE INTERRELIGIOUS COUNCIL AS ONE OF THE ACHIEVEMENTS

The Peace Building Centre mentions the Interreligious Council in Sanski Most as one of its greatest achievements. ''It took us 10 years of hard work, and almost half of it was used in order to bring religious leaders to the same table, in order for them to get to know one another, exchange experiences and discuss the issues they have in their communities and to discuss problems in the society in general'', reminds Vahidin Omanović.

When they got the idea, they were aware that the local community mostly trusted the religious leaders, because they did not only see them as their spiritual leaders, but also as someone who was there to take care of them. ''We did not expect to be where we are now. I do hope that we will continue progressing, because we have an inter-religious school for young people in Sanski Most, where the three of them come and hold lectures'', adds Omanović.

''Everyone was saying that it would not succeed, because it has not been successful anywhere. Even if it existed, it was somehow plastic everywhere. However, in our case, there were no large funds involved and it was no project; it was rather implemented without any money. And we succeeded, because today, when they meet, these are very honest and cordial meetings'', says Mevludin Rahmanović.

Over the years, the two non-governmental activists became known among their citizens, so that people were willing to meet them in all kinds of places and discuss their war trauma: detention in concentration camps, wounds, rape, destruction of property, the death of their family members. ''People approach us even outside the workshops. We hear stories about what people survived on a daily basis, and, of course, we are touched by them, we care. People see and feel this. That is also the reason why they open up'', admits Vahidin. In the meantime, the Peace Building Centre went even beyond the local level, which was also supported by the awards that started arriving.

I see the ''Bremen award for the unknown peace builder'', as the award I received four years ago is called, as an award for everyone. I would not have been able to do all of this alone and I have never accepted the award as belonging just to me. This is our award. After receiving it, a thousand doors opened for us. Last year, we received an award for the peace camp programme from the British organisation Peace Direct. It was selected among some 200 similar peace camp programmes as the best in the field of peace building'', explains Vahidin. Soon they will also receive an award from a US foundation for their efforts to prevent genocide and mass crimes, which is a confirmation that their efforts are recognised there as well.

The local authorities have also recognised their efforts and promised to provide them with the old railway station building for 30 or 50 years, which needs to be renovated and adapted. For them, as they say, this is a large donation, impetus and acknowledgement, because the ''municipality could never give them as much money as all of that is worth''.

''I do hope that all of that will continue opening doors for us, so that we will be as visible as possible both abroad and in Bosnia and Herzegovina. Finally, we have proven that everything we do is not mere beating around the bush, but rather that all of it makes sense and brings about results'', concludes Mevludin Rahmanović.

''All of this is still a situation in which there is no war and there are many issues that we need to achieve in order to complete peace building, that is, in order to be even able to start thinking about sustainable peace, to be able to relax and say – now we are safe. Peace is a process that lasts'', says Vahidin Omanović.