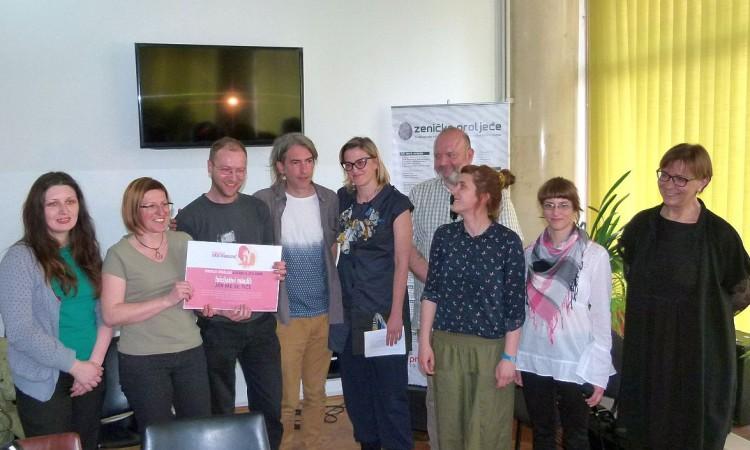 'Farah Tahirbegović' Award for the Youth Initiative 'Because it Concerns Me'

The annual award of the "Foundation Farah Tahirbegović" was conferred today in Zenica upon the informal youth initiative "Because it Concerns Me" for their multi-annual contribution to the preservation of the "culture of remembrance" as a basis for the fight against oblivion, denial of war crimes, discrimination and segregation and the fight for restoring the dignity of all civilian victims of all warring parties of the past war in Bosnia and Herzegovina.

A jury member for this year's award of the "Foundation Farah Tahirbegović", the director and civil society activist in Bosnia and Herzegovina, Jasmila Žbanić, said that the award was conferred upon a large number of citizens of Bosnia and Herzegovina, since the youth initiative "Because it Concerns Me" did not have a permanent membership and citizens participated in compliance with their personal possibilities and capacities.

„There is room for all of us to participate in this initiative, since it does not have a particular focus. Everyone is welcome to try achieving something important for our children in their environment. It is important to speak about the fact that crimes were committed and that they were not committed in our name“, said Jasmila Žbanić for Fena.

As part of activities for marking the remembrance of Farah Tahirbegović, an independent photo exhibition, "Balkan Blues", by the author Dženat Dreković, one of the former award winners, was opened at the reading room of the Library of Zenica. While speaking about this exhibition, the Chairman of the "Foundation Farah Tahirbegović", Ferida Duraković, emphasized that the photographs of Dreković "give an insight into the world of the Balkans".

„His photographs are painfully truthful, but he is also in love with the topics he processes and he depicts the Balkans the way it is in his heart“, said Duraković.

The second part of the event included a round table discussion about the "(Lack of) Youth Activism and Recent Past" that was attended by numerous civil society activists throughout Bosnia and Herzegovina and friends of the Foundation.