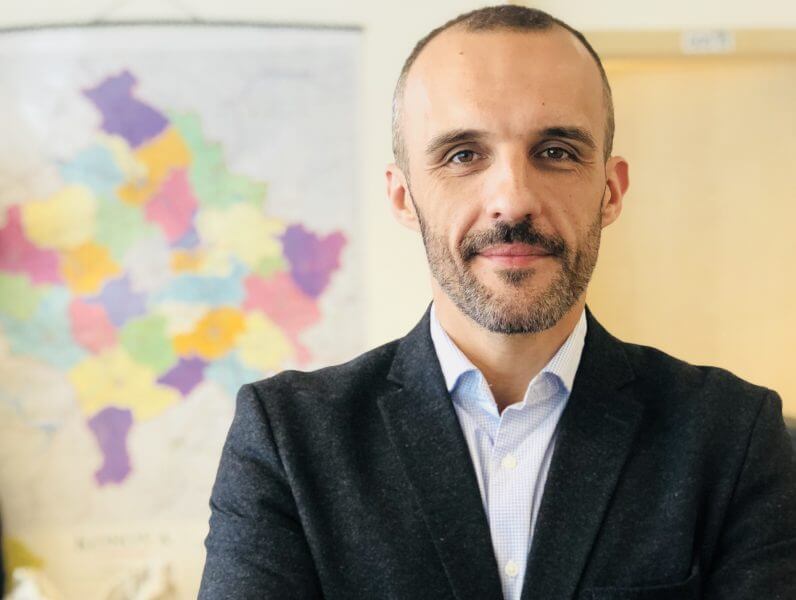 Interview: The Past Still Afflicts the Linguistic Diversity in Kosovo

Multilingualism is still regarded as a responsibility of the educational system in Kosovo, yet the majority of schools practice the use of only one language in the classrooms.

The issue of multilingualism in Kosovo, within an education system that is mainly divided along the ethnic lines, still reflects the past and divisions that weigh upon the linguistic diversity.

The Language Commissioner at the Government of Kosovo, Slaviša Mladenović, says in an interview for forumZFD’s Dealing with the Past blog that linguistic policies in Kosovo focus on the standards of official languages, yet the situation with regards to the observation of bilingualism is still dire. He says that more time is needed to leave the past behind and learning the language of each other shall narrow the division gap.

Serbeze Haxhiaj: What is the current situation with the observation of the official languages in Kosovo, at all levels of the state administration, and in the judicial system?

Slaviša Mladenović: It does not take much to realize that the situation is bad. It suffices to take a look at the official webpages of the government institutions – not all of them – and the status quo is obvious. Then, based on an assessment that we carry out, as the Office of the Language Commissioner, the situation appears to be more dire because we understand the roots of the problem. That meagre level of observation of the law is more a result of the support provided by external projects rather than by the institutional resources and will. There is a pronounced lack of staff and staff is discouraged to work in this sector, and we have a generation of people who know Serbian well but who are aging. Unfortunately, the generation of the post-‘90s have little knowledge of Albanian or Serbian languages. However, the lack of willingness of many political officialsto apply the law on bilingualism and not to breach the principle of language non-discrimination in Kosovo lies at the heart of this problem.

The same goes for the Serb majority municipalities. They likewise fail to observe the law of using Albanian language. The way how an Albanian feels in Zubin Potok, that is how a Serb in Gjakovë/Djakovica feels.

SH: What contributes mostly to this situation of linguistic division and exclusion?

SM: Because this entire time the message of observing official languages and respecting the language of the other was not conveyed. The Law on Languages did not arise naturally or as something that we did. Instead, it was imposed by the Comprehensive Proposal for the Resolution of the Status of Kosovo, known as the Ahtisaari Package. As long as this spirit continues, the law will not be observed.

SH: We notice the crisis for translators in everything related to the state administration and the judiciary. How can we narrow this gap sooner?

SM: We are currently facing negative trends. We cannot build new capacities. What is happening makes no sense. Even if there were no Serbs in Kosovo the country is surrounded by neighbours who speak Serbian or Croatian. Just as there is the Albanistics department in Belgrade, this should also be in Mitrovicë/a, Niš or Vranje.

SH: For a long time, the Serbo-Croatian language was the “lingua franca”, and at the same time, especially after the’90s, Albanian language was excluded and denied. The situation reversed after the war in 1998-99. How did this affect multilingualism in Kosovo?

SM: Dealing with the past in the linguistic aspect means that we have to deal with a system such as Yugoslavia was, which no longer exists. At that time, Serbo-Croatian was the language of the administration and official communication, and the majority had the same language. It was the language of the majority of the population. Only the Hungarians and the Albanians were more left out. This resulted in most Albanians communicating in Serbo-Croatian. Now, the inertia goes in the opposite direction of what used to be for more than half a century.

SH: What can create a more sustainable bridge in the use of languages and interethnic communication?

SM: There are two main things: there exists a group of people from both sides who want to learn the languages of each-other. This is demonstrated by our analysis and the interest of people to attend language classes. Over 800 people applied for 300 places only through our platform “Voc- Up”, a digital platform to learn Albanian and Serbian languages online. I feel that the ice is slowly breaking. However, a stronger message from the leadership is needed. One of the mistakes that the leadership in Kosovo and Serbia did was to exclude languages.

SH: Your office has drafted a strategy to strengthen the mechanisms that promote multilingualism, why is the Government not approving this strategy?

SM: This gives the same message. This message means that the failure to approve this strategy for so many years indicates that observation of the official languages and the languages of the other communities are not a priority. Each should understand that multilingualism is also a strength for those entering in the labour market, as they are more competitive than the others. In this way, we shall be more competitive in the regional market.

SH: Why do you think there is resistance to this document?

SM: It is not a priority at all. If a Prime Minister does not convey the message that he has the willingness to mitigate a problem, which first and foremost is a problem of the state administration, the lower levels of the institutional hierarchy too shall not observe that law. This is a manifestation of a certain kind of unreal patriotism that in fact harms the state of Kosovo rather that brings it any benefit.

SH: However, you continue to realize some of the items in this strategy. One of these was your collaboration with opening the Balkanistics Program under the auspices of the Faculty of Philology. Do you believe that the program may help mitigate the crisis of translators?

SM: The Balkanistics is a very important step but not a sufficient one. At least 5 years are needed to learn a language properly. Also, it is important to establish a centre of foreign languages that can certify the knowledge of languages. Balkanistics has 11 students, mostly Albanians, and it was a type of compromise but not exactly the learning of the Serbian language. There were many Serbs interested in this program, but their high school diplomas (of the Serb parallel system) are not recognized.

SH: From the perspective of the social, cultural, and political cohesion in Kosovo, how did the past shape the relationship of citizens with the languages? Can balanced bilingualism help reduce animosity?

SM: One party only is not at fault for this. What brought on the war caused this damage too. This continued to be strongly felt everywhere. Learning the languages of each-other shall reduce the barriers and narrow the gap of divisions. Maybe more time is still needed to leave behind the past and the divisions but in general it would help warm the relations between communities. Of course, what has happened weighs heavily nowadays, but someone must terminate this long chain of excluding one another and not respecting the language of the other. Interethnic relations are better than they are presented. There is a loud minority that manifests bad relations, plants hatred and by such noise, plants divisions.

SH: There is a lot of discrimination towards other official languages at the local level, especially towards Roma language, which is official in Gračanica/Graçanicë. It is a language that has an unclear status even legally but what is being done to mitigate this confusion?

SM: The Roma language, as a second official language used in Gračanica/Graçanicë is not being fully observed. There is no translation staff. The ministry does not accept the municipality requests for a Roma language translator. Then, there is an added problem. Who would be admitted as a Roma language expert when we do not have an official language standard by any academic level institution in Kosovo or something similar. It is not clear what traditional language means. According to the law, it is not clearly defined what traditional language means. The law needs to define this issue more clearly.