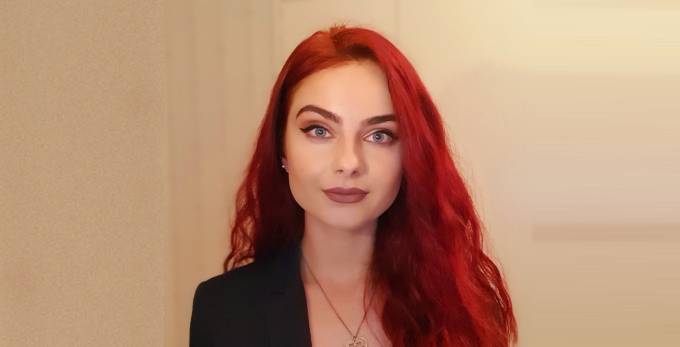 Membership in the European Union (EU), or rather the integration process of Bosnia and Herzegovina (BH) in the EU is the main stimulus for reforms, which also include politics of dealing with the past and the heritage from the past. This mostly means transitional justice, which is an entire string of processes that help society overcome tragic events from the past in a way that secures and protects victims' rights, reveals the truth, while those responsible are processed and punished with the aim of strengthening the rule of law in a post-conflict environment. Although transitional justice hasn't been formally included in negotiating chapters on EU accession, taking concrete steps toward improving the environment favorable for reconciliation is a part of the Opinions of the European Commission about Bosnia and Herzegovina's request for membership, so there is no excuse for postponing reforms. Keeping in mind that EU membership is one of the main foreign policy priorities of Bosnia and Herzegovina, active work in overcoming the heritage of war by establishing the previously mentioned mechanisms is necessary on that road, and its importance will be presented in the following article.

In order to justify expectations and fulfill the obligations that this country has on its road to Europe, much more must be done. The fact is that apart from transitioning from war to peace Bosnia and Herzegovina had to go through a transition from an authoritarian to a democratic regime, which is still burdened by the consequences of war and frequent political crises. The complex institutional organization and a lack of political will are the main reasons for a slow implementation of any kind of reforms, including those that are related to dealing with the past.

The opinion of the EU on this issue is unambiguous – supporting the process of transitional justice moves towards establishing a framework for dealing with the past which favors reconciliation and building a future for Bosnia and Herzegovina in accordance with European values. The most current type of support in the said process can be seen within the IPA 2019 support program titled “EU4 Transitional Justice”, by which the EU secured four million euros for the improvement of courts and prosecutors’ offices working on cases of war crimes. This is the fourth phase of support which will be implemented through the project “Improvement of working on war crime cases” by the end of 2022 and it is an indicator of the EU's partnership in the implementation of the transitional justice process.

Adopting the State strategy for working on war crime cases in 2008 the first step was made toward achieving justice for victims of war crimes. The mentioned Strategy foresees the processing of the most complex and priority cases of war crimes within seven years, while the end of the processing of other cases is planned by 2023. Determining the responsibility of individuals for human rights violations and war crimes is an important mechanism of transitional justice that provides legal security and certainty in a country, and thus strengthens the rule of law. Unfortunately, due to problems such as a lack of strategic planning and an insufficient number of prosecutors and expert associates, badly trained investigators and poorly written indictments cited in the analysis of the Criminal Defense Department, the period of seven years expired in 2015 without the set goal being achieved.

This is why in 2020, after two years of waiting the Revised state strategy for working on war crime cases was adopted with the goal of answering to the challenges which affect the efficient processing of these cases. It was adopted together with Annex B, which more closely defines parts related to cases from category A Rules of the road and for which the International Criminal Tribunal for the former Yugoslavia (ICTY) has found that there is sufficient evidence to prosecute 848 people on reasonable suspicion of having committed a grave violation of international humanitarian law. In the initial Strategy the cases from category A were sorted together with many other unsolved cases which didn’t belong to this category according to the assessment of the ICTY, while the Revised Strategy, that is Annex B, has become a priority in the work of prosecutors' offices in Bosnia and Herzegovina. In addition, regional cooperation in the prosecution of war criminals was additionally defined, as well as the manner of work of the Supervisory Body for monitoring the implementation of the Revised Strategy. In order for the Revised State Strategy for Work on War Crimes Cases not to remain a mere formality, it is necessary to work on its effective implementation in the coming period in order to close all war crime cases by the given deadline. Although this can be characterized as a small step towards achieving one of the 14 priorities from the European Commission's Opinion, it is not enough to achieve the goals of transitional justice.

What would contribute to this process is the adoption of the Transitional Justice Strategy, a document which as early as 2012 envisioned the creation of a platform for activities that will correct injustices, heal trauma and prevent the recurrence of human rights violations and war crimes. In addition, the goal of this Strategy was to work with out-of-court mechanisms to establish the facts and tell the truth about the events that took place between 1992-1995, to ensure the right to reparation and preserve collective memory, and to implement institutional reforms. Unfortunately, this Strategy has not been adopted yet due to a lack of political agreement. Adopting and implementing this document would place the focus on victims’ rights and their interests, which would influence active work on solving existing problems and strengthening an already greatly damaged trust in institutions. Until then, the violation of human rights will continue, and the process of reconciliation towards the healing of the post-conflict society as well as the process of moving closer to the EU, will stagnate.

Apart from the above mentioned, the current situation on the political scene is a great obstacle for the political development of this country and it devalues the victims of war and its citizens. The glorification of war criminals, denying and disrespecting the decisions of international courts, and the division around the Amendment to the Criminal Code of Bosnia and Herzegovina  regarding the prohibition of genocide denial, war crimes and glorification of war criminals point toward the existence of politics that don’t want reconciliation in Bosnia and Herzegovina. The analysis conducted by forumZFD and TRIAL International regarding the regulation of the prohibition of genocide and war crimes denial mentions that behavior such as genocide justification and denial of war crimes to maintain a constant state of conflict has become a part of everyday political activity. This was one of the reasons why the prohibition of such behavior was necessary. 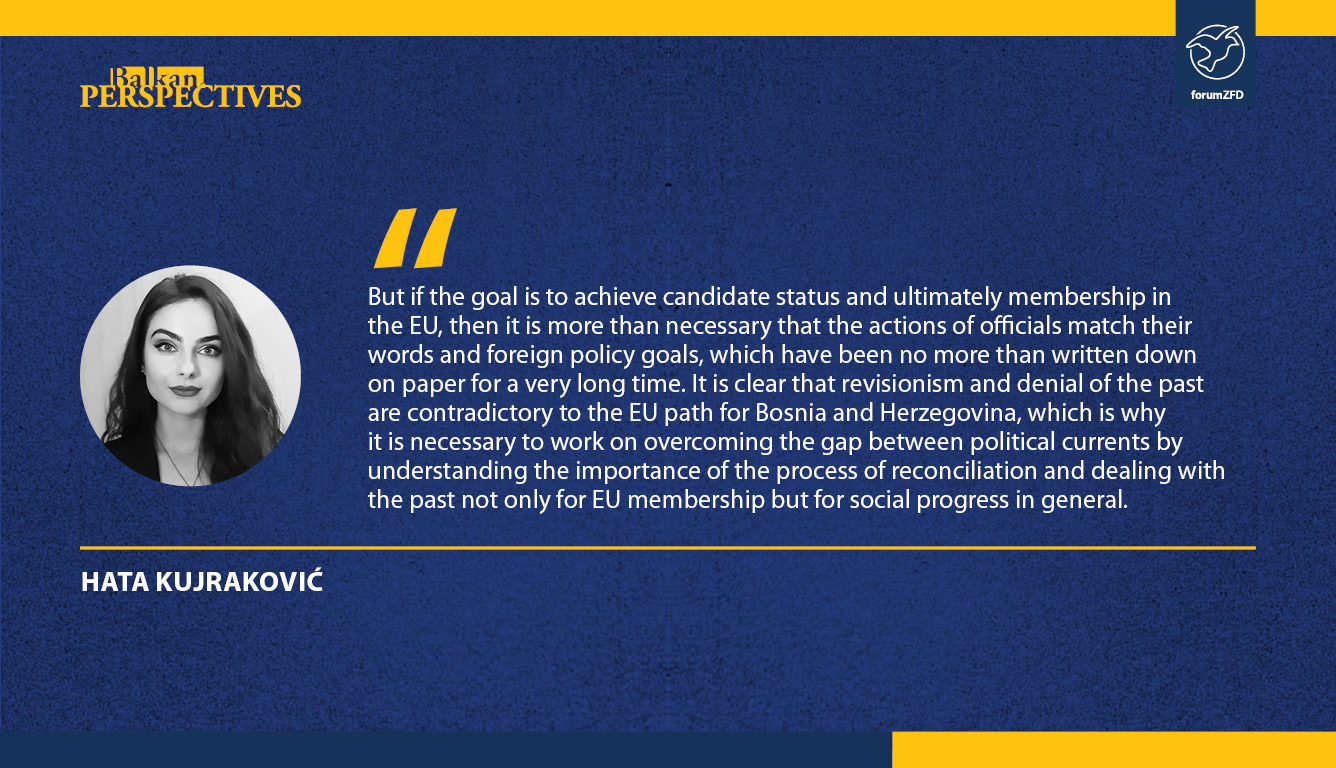 Regarding the Law on the Prohibition of Genocide and War Crimes Denial, which was imposed by the High Representative Valentin Inzko, it is important to add that this would not have happened had there been a political will to adopt this legal act. The law is quite significant because it prescribes prison sentences for denying genocide, crimes against humanity and war crimes, but also for glorifying war criminals. In addition to offering a sense of justice for victims of war, this law offers a solution to the problem of hate speech because it provides sanctions for those who incite violence or hatred against a group or a member of a group based on race, skin color, religion, background or national or ethnic affiliation. Forming and processing cases will be a challenge for the Prosecutor's Office of Bosnia and Herzegovina in the coming period due to their potential accumulation. At the same time, the revolt and refusal of political representatives from the Republika Srpska to participate in the work of state institutions in Bosnia and Herzegovina shows that there is no responsibility for the function they perform and that financial compensation is still received for poor or no work results.

This kind of situation in the country is complex and there is no universal solution for it which would be effective overnight. But if the goal is to achieve candidate status and ultimately membership in the EU, then it is more than necessary that the actions of officials match their words and foreign policy goals, which have been no more than written down on paper for a very long time. It is clear that revisionism and denial of the past are contradictory to the EU path for Bosnia and Herzegovina, which is why it is necessary to work on overcoming the gap between political currents by understanding the importance of the process of reconciliation and dealing with the past not only for EU membership but for social progress in general.

Hata Kujraković is a Master's student in European Affairs at Lund University in Sweden and currently works as a Project Officer at the BH Foreign Policy Initiative. She graduated from the Department of International Relations and European Studies at the International Burch University in Bosnia and Herzegovina. She has worked on projects related to the promotion and improvement of human rights and knowledge and skills among young people in Bosnia and Herzegovina. Her interests are political processes in the EU. Hata is a fellow of the Humanity in Action BH Foundation and the BH Foreign Policy Initiative.