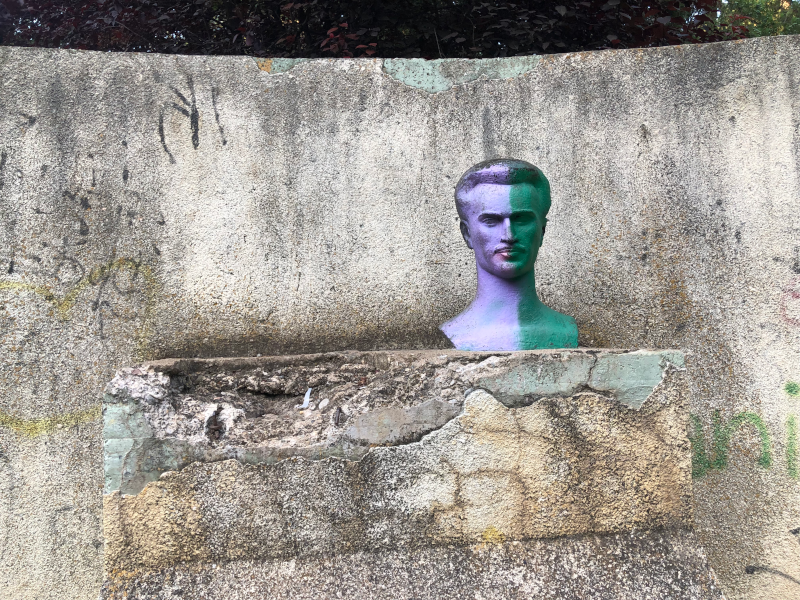 More than two decades after the dissolution of Yugoslavia, just like other countries of the Federation, Kosovo too faces the problem of dealing with its communist years.

Latif Gashi was only five years old in 1962 when, construction of a building began in front of his home in Landovica, a village in Prizren, a southern municipality in Kosovo. He did not know what that was, but he recalls how he liked to play around it, after the workers would leave. When he started school, the 10-meter concrete building had taken shape. He learned that it glorified two partisans: the Montenegrin Boris Vukmirović and the Albanian Ramiz Sadiku, who were both killed during World War Two as they had refused to be parted from each-other.

In the morning of 10 April 1943, Vukmirović and Sadiku, members of the Regional Committee of the Communist Party of Yugoslavia, were caught by the Italian soldiers. The Italian soldiers had offered Ramiz to pardon him, but he had refused. Therefore, both were executed, while they were in an embrace.

The fall of “brotherhood-unity” symbols

Almost three decades after, the memorial became the symbol of “brotherhood-union”, the slogan of the Yugoslav Federation that promoted co-existence between ethnicities. In June 1999, this memorial was the first among many buildings of that period, which were destroyed in Kosovo.

Many other monuments that were constructed to remember the war against fascism in the country shared the same fate with the memorial. “I still believe that this history (of the partisans) was a myth created to promote an artificial inventions like Yugoslavia” says Gashi, sitting at a bar across from the spot where the building which no longer exists used to be.

Gashi says how he would see every year people coming from all corners of Yugoslavia to pay their honours, including the communist leader himself – Tito, and that the memorial had become a pilgrimage site. “After 10 April, it would continue with the weddings. Weddinggoers would stop here; brides would take pictures and the others would dance. It would happen that three-four different weddinggoers would arrive at the same time” says Gashi.

This continued until 1990, when the bloody dissolution of former Yugoslavia began, and the memorial was neglected. On its left there was a huge mural made of white-and-black mosaic tiles, depicting a scene filled with faces and some of them with fists raised, symbolizing the people’s uprising. One hot June afternoon in 1999, a few days after the war had ended, Gashi heard a strong noise. A group of people wearing uniforms of the Kosovo Liberation Army were demolishing the building. Years later, the complex was transformed into a martyrs’ cemetery and instead of that memorial, another one, honouring the KLA war, was erected.

“It’s not like I felt any pangs of nostalgia about it. I did not see anything true there. However, it should not have been brought down. At least not the mosaic”, he says. In Prishtina, at the city park, where the two busts of Boro and Ramiz used to be, now there is only one of the latter.

Miranda Jakisa, a professor of Slavic Literature and Culture at the Humboldt University in Berlin describes memorials such as these as testimony of a “dedication to active victimisation.” All around Kosovo, many of the monuments and busts of the former Yugoslav period were demolished and the remaining ones resemble objects that are rotten and decaying with time, showing missing pieces and almost all of them are ready to fall down, thus becoming an undesirable heritage.

After the end of the war and of the rule of Serbia over its former province, other buildings of the communist Yugoslavia period were taken down, and hundreds of street names were changed. Currently, there are only 11 monuments related to the World War Two and the communist era in former Yugoslavia. Only six of those are included in the list of Cultural Heritage for Temporary Protection of the Ministry of Culture.

According to the Ministry of Culture, some 5 percent of buildings in the List of Cultural Heritage for Temporary Protection belong to the second half of XX century. “The buildings of this period (Yugoslavia) are of a particular importance as they pertain to the collective memory and are a marking of a certain period, not too far,” says for Nora Arapi Krasniqi, advisor of the Minister of Culture at the Government of Kosovo.

Kosovo has an Agency for the Protection of Monuments, but no information was found on any service taking care of these monuments. The monuments of this period are not the only ones that are object of the debate whether they should be demolished or not. More than two decades after the dissolution of Yugoslavia, just like other countries of the Federation, Kosovo continues to have a problem of dealing with its communist past.

Last year, the municipal authorities in Vushtrri decided to turn into a part the court building, which had been constructed over half a century ago. Activists like Bledian Salihu opposed this decision, requesting that this building remain as a piece of the collective memory to remind the repression against Albanians. “I think it should be saved as a relic of a harsh time, despite efforts to erase those times from the collective memory of the people,” says Salihu

Salihu says the court building in Vushtrri represents a unified architecture of buildings constructed for the function of a court during former Yugoslavia time. “The building is the same with other court buildings in all former Yugoslavia and among the few in Vushtrri that represents the architecture of a modern time,” he adds.

Besides the vandalization right after the war, the process of privatisation of socially owned properties, and the economic and urban developments, resulted in many buildings of the second half of XX century to be alienated.

“There is a need to document this period and to identify important buildings that should have the status of being under legal protection,” says Arapi- Krasniqi. Public property buildings are awaiting the determination of the new function that the Ministry of Culture says should be done through “community participation”. Whereas buildings still hostage to the privatisation process await a status that protects them from annihilation of these fragments of collective memory.

Fatlum Ibrahimi, a historian, says these buildings have historical importance, as they demonstrate the extreme ideologization of the society by the communist system. “They are no longer appreciated, as they were built under the spirit of communist, of a system and of a state that no longer exist, and due to the fact that there was no strong anti-fascist resistance in Kosovo.”

Last month, the Ministry of Culture included the court building in Vushtrri in its List of buildings of the Cultural Heritage under Temporary Protection, classifying it as “a building of architectural value”. Arbër Sadiki, an architect, says these buildings, done in the vernacular or people’s spirit, are examples of using this architecture in the contemporary spirit and constitute heritage. “The public buildings of the (former SFRY) period still are the spirit of the cities as they have managed to establish such relation with its citizens,” says Sadiki. “They should be viewed in relation to the time, ideology, and culture – above all, the human experience,” he says.