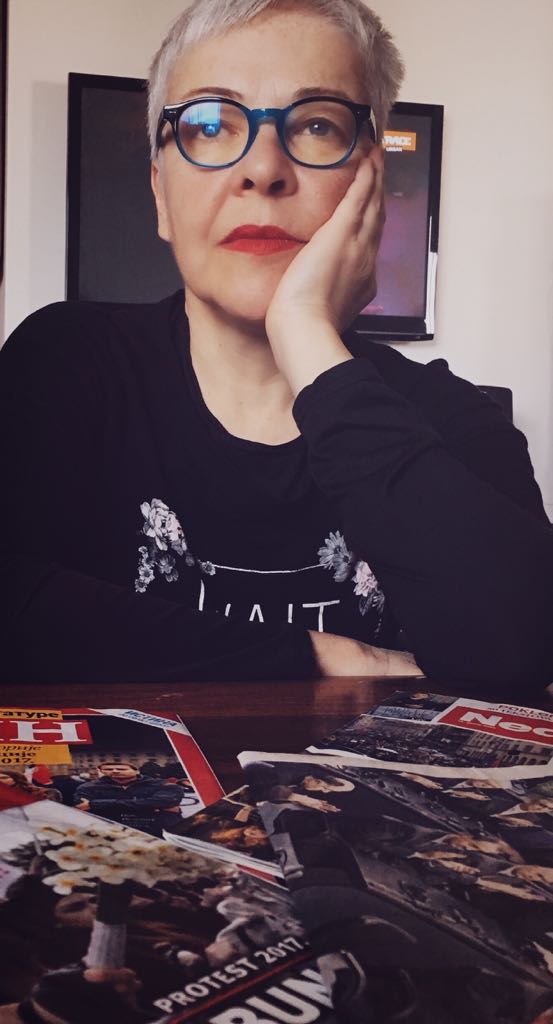 Photo: Private archive
Black cardboard squares, about one square meter each, were piled one on top of the other in front of the Palace Albanija and hundreds of people would walk up to them and take them, without any order. It was pretty chaotic. People were very excited, like their emotions were running wild or someone had suddenly popped a balloon ready to burst.

»We were emotionally horrified by the footage of the people massacred by grenades while standing in line at the bakery in the Vasa Miskin Street, the main street in Sarajevo. We were already losing hope that we could change anything, but we couldn't keep silent«, remembers Rade Radovanović, journalist, activist and screenwriter of the last Yugoslav film  »The Original of the Forgery«.

It's doubtful that everyone knew the script for the Black Armband[1] protest, and yet the »chaos« was easily organized into a long, continuous black line, along the main street in Belgrade, from Terazije to the Slavija Square. Everyone was holding the cardboard squares with discipline, in silence, connected to each other. They carried the 1300m long armband and proclamation with a message to Sarajevo »We are with you«, demanding for the war to end, for the siege of Sarajevo to end, and wearing black in grief for the innocent victims of the senseless shelling by the Republika Srpska Army.

Some 100 000 people came out on the streets of Belgrade to oppose the war, the crimes and the horrors which had by then already spread through Vukovar, Dubrovnik and reached the cities in Bosnia and Herzegovina.

REMOVING HEROES FROM THE DEFENDERS OF HONOR

You'll have a difficult time finding footage, photos, testimonies on Google Search, or anything besides dull and lapidary data related to the Black Armband, even though it was the largest anti-war protest ever organized in Belgrade, and completely one of a kind. There is no systematic data which can convey the energy, the emotion, the idea of peace, the very essence of humanity which brought so many people out on the streets that sunny Sunday of May 31 1992. School books, museums and institutions of public memory keep no record of it.

After October 5, and the democratic changes, the new government didn't understand the importance of securing after the war the public memory of those sparks of civil antimilarism. Perhaps they were exhausted, in those first years of reform before the murder of Prime Minister Zoran Đinđić, to preserve the memory of something which most parties did not regard as an honest or a primary goal. Nurturing the memories of peace protests would have certainly gone much more smoothly had there been an honest dealing with the past atrocities after the wars of the 90s, which never happened. It would be illusory to expect that from today's government, which in many ways inherited the politics of the 90s.

Regardless of how huge the Black Armband protest was, it would only be fair to say that this protest and many other anti-war activities rested on the ideas and the actions of a small number of individuals. The emotional horror, the shame and the opposition to the war would perhaps have remained silent, had it not been for a small but loud and brave group of Belgrade intellectuals, professors, peace activists, actors, directors, journalists... who by 1991 formed numerous NGOs in order to oppose the insanity and set anti-war actions in motion.

This was perhaps best described in an interview from 2005 by Emir Geljo, who was a participant in the Belgrade peace protests during those first years, and is now a world-famous set designer:

We should also be honest and say that the Black Armband protest owed its scale to the opposition parties. Especially the Serbian Renewal Movement with Vuk Drašković who was at the time considered the unofficial king of Serbian protests. The opposition parties, even though they mostly did not honestly share the idea behind the Black Armband, came to the protest without party insignia.

Veran Matić, the head of the cult radio station Radio B92, which informed the citizens of Belgrade about the Black Armband protest, stated in the book by Dušan Mašić:

»In order to have 100 000 people on the streets it was important to include Vuk Drašković and the Serbian Renewal Movement as strong political institutions in the protest. (...) The Black Armband was an important indication of the political mood. Even though I understood that there was no energy, no momentum to make any real change, it was important in that situation when all Serbs were seen as aggressors by the rest of the world. (...) Perhaps it was more important for us to not feel alone, than to actually have an effect on the government« Talasanje Srbije (»Waves of Serbia«).

Memories of anti-war protests have become dead memories. They are the memories of individuals, and many of them are already dead. It sounds banal, but the facts are relentlessly banal and sad. The memories have not been collected, and even the living participants often confuse events, because time always takes its toll.

Here is a short reminder: the organizer of the Black Armband was the now nearly forgotten organization Civil Resistance Movement. One of its main activists was the now almost publicly just as forgotten, great avant-garde writer, Biljana Jovanović (1953-1996), the good spiritus movens of many anti-war actions. In those years’ women made up a large part of the anti-war Belgrade circle through which intellectuals connected with each other: Borka Pavićević (1947-2019), Biljana Kovačević Vučo (1952-2010), Zagorka Golubović (1930-2019), Nataša Kandić, Staša Zajović, Sonja Liht, Jasminka Hasanbegović...

The above-mentioned set designer Emir Geljo, who was active in the Belgrade theater »Duško Radović«, one of the centers of the anti-war resistance, came up with the idea of how to create the black armband effect without a black canvas which could not be purchased.

Zoran Đinđić, who was the president of the Executive Board of the Democratic Party, thought up the name for the protest. Rade Radovanović remembers that the idea for the date of the protest also came from Đinđić. Slobodan Milošević had scheduled federal and local elections for May 31, and Đinđić said:

»Those are their elections, we will have ours. A black armband«

THE FORGERY OF MEMORY

If the memory of the courage and nobility of the people who opposed the war is suppressed, then the memory of the horrors of war and the destructive hatred becomes in fact a toxic foundation for its continuation. It is difficult to bear only shame for everything that happened, and not be constantly reminded that there were examples of those who opposed the ghettoization and killing people. Human beings are wired in such a way that their survival instinct makes them forget that which is not illuminated. Those who forge history plant forged foundations and explanations for the war, and the data on the Black Flora is buried under the infodemic flood of forgeries denying the atrocities.

Suppressing the memory of peace protests and anti-war demonstrations in Belgrade (the Black Armband was the largest, but not the only anti-war protest) and the resistance against mobilization in those years throughout Serbia is a solid basis for forging history, denying crimes and propagating the Nazi ideology we are witnessing in Serbia. Perhaps the most shameful example of forgery was seen recently during the celebration of the Day of Victory over Fascism on May 9 in Belgrade.

Banal marches of the Nazi collaborator Dimitrije Ljotić were sung before the state leadership, with a live public service broadcast, from the central cultural institution - the National Theater, while the forgers of history shamefully presented them as the poetry of Momčilo Nastasijević. The article by Tomislav Marković about that forgery concludes:

»The voluntary renunciation of the brightest anti-fascist traditions and siding with the losers in World War II inevitably leads to various forms of moral and every other kind of doom«.

Although the anti-war protests of the 1990s in Serbia, unfortunately, were not on the side of the victors, their renunciation through oblivion leads to the same moral mindlessness in which we are now dizzyingly rushing towards the forged past. Because the bearers of the ideas which oppose anti-fascism and anti-militarism have always been the same in Serbia, in 1941, 1991 and now in 2021.

[1] A black armband, usually in the form of a black strip of cloth, is worn on the lapel as a sign of mourning for a deceased loved one